An Open Letter to Tony Kushner

A Letter from Van Gosse to Tony Kushner: So here's my request: it would be an immense service if you and Mr. Spielberg would confront the reality of that war, so easily effaced as the trope of "Vietnam." This request is occasioned by Nick Turse's brilliant new book, Kill Everything That Moves. 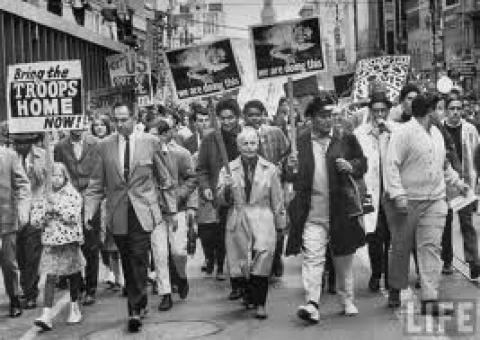 This historian tips his cap to you. In The Intelligent Homosexual's Guide to Capitalism and Socialism with a Key to the Scriptures you captured with remarkable empathy the language, cultural references, and worldview of the Old (as in Communist) American Left, still persisting after the Cold War. Everything needed to explain the trajectory of those compromised, principled, tragic humans was right there. And in your films with Steven Spielberg, Munich and Lincoln, you imagined with great fidelity to place and time real actors caught up in history, presidents and prime ministers and the lower-level operatives who carry out their orders, from belief and duty. Your work fulfills Marx's dictum in The Eighteenth Brumaire, that "Men make their own history, but they do not make it as they please; they do not make it under self-selected circumstances, but under circumstances existing already, given and transmitted from the past. The tradition of all dead generations weighs like a nightmare on the brains of the living."

When I re-read Marx's famous aphorism, what came to mind was Gerald Ford telling the nation on August 9, 1974, that "our long national nightmare is over." Formally, Ford meant Watergate's trauma, but his larger allusion was to the war then barely ending, which even now feels like some kind of waking dream hanging over us, a very bad "national nightmare," of the sort that Marx suggested.

So here's my request: it would be an immense service if you and Mr. Spielberg would confront the reality of that war, so easily effaced as the trope of "Vietnam." This request is occasioned by Nick Turse's brilliant new book, Kill Everything That Moves. That's what Captain Ernest Medina -- he's in the White Pages, living in Marinette, Wisconsin -- told his lieutenants, including the ineffably banal William Calley, the day before they marched into Pinkville, known later as My Lai. Using the Army's own records, Turse has proved beyond doubt that Medina was uttering the facts of policy, that the final strategy of the U.S. military was to kill so many people that the Vietnamese revolution would drown in blood, which was and is a crime against humanity, as defined at Nuremberg.

The title of the movie would be simple and unmistakable: My Lai. Seymour Hersh published the book of that name in 1969, based on assiduous interviews of soldiers and enough documents to make it stick. Ever since Americans have told themselves it was "an isolated incident." Even liberal intellectuals unalterably opposed to Vietnam and any more Vietnams focused on the massive bombing, while the broader public focused on welcoming home the veterans, damaged and otherwise. Youthful leftists like me back in the 1980s, steeped in the radical version of the war, presumed everyone knew what Turse anatomizes. We'd heard of the 1971 Vietnam Veterans Against the War "Winter Soldier Hearings" in Detroit, one long truth commission on the war's commonplace atrocities, summed up in VVAW leader John Kerry's testimony before an impromptu Senate hearing that April. We took it for granted that My Lai wasn't an aberration but a representative instance. Later, if you were a teacher, you might assign Christian Appy's classic Working Class War, which clarified that killing civilians to get the "body count" up so some officer could get his promotion, and his men get some goodies, was an everyday event. But that radical awareness didn't penetrate very far. Most people knew the war was a quagmire to be avoided in the future, but recognizing what was done in our name went AWOL a long time ago.

Pick up any account of My Lai, and it plays itself out in the mind's eye. The angry grunts, draftees from the battered parts of America, badly-officered and revengeful, taking heavy casualties in the weeks after the Tet Offensive, when the Vietnamese revolutionaries rose up everywhere. The competent, vicious Medina, working to turn his troops into professional killers. The pathetic Calley, so venal it was easy for higher ranks to blame everything on him later. The day itself, as Calley showed off by beginning the killing of women and children, and how enthusiastically many of his men took up the offer of a spree. Those few who wouldn't kill, and wandered off, or gave themselves wounds. General Samuel Koster in a spotter plane overhead, seeing all the gunfire in an undefended village. Finally, the helicopter pilot Hugh Thompson, ordering his door-gunner to range on Calley's men as they prepared to murder more women and children. Then the long months as the soldier Ron Ridenhour, who'd heard of the massacre second-hand, wrote to Members of Congress, trying to get someone to notice. Finally Hersh gets wind and publishes his book, followed by the horrific color montage in Life, taken by one of the killers. Ending with the court-martial in 1971, and acquittals all around, except for Calley's 42 months under house arrest after being convicted of killing 22 human beings, until his pardoning by Nixon.

I hope you think about writing My Lai. It would be a great thing -- no redemption, just memory, so we can't forget.