"We seek to honor on this fiftieth anniversary of the Birmingham Children’s Crusade the role of children and youth who were frontline soldiers in desegregating public schools and public accommodations. I hope they will inspire us to remind children and youth today that they are not citizens in waiting; they too can be transforming agents for change." 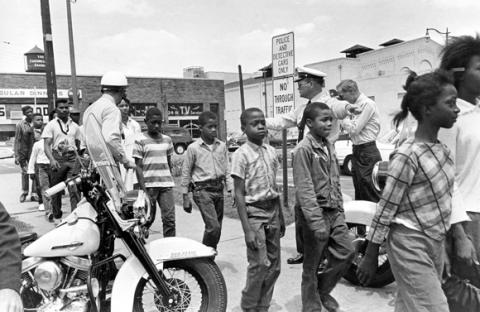 Policemen lead a group of black school children into jail on May 4, 1963,Bill Hudson/AP

“Daddy,” the boy said, “I don't want to disobey you, but I have made my pledge. If you try to keep me home, I will sneak off. If you think I deserve to be punished for that, I'll just have to take the punishment. For, you see, I'm not doing this only because I want to be free. I'm doing it also because I want freedom for you and Mama, and I want it to come before you die.”

This teenage boy overheard talking to his father by Dr. Martin Luther King, Jr. was one of the hundreds of Birmingham children and youths who, 50 years ago this month, decided  to stand up for freedom.  They stood up to fire hoses and police dogs and went to jail by the hundreds and finally broke the back of Jim Crow in that city known as “Bombingham.” On this 50th anniversary of the Birmingham Children’s Crusade it is a time to remember, honor, and follow the example of the children who were frontline soldiers and transforming catalysts in America’s greatest moral movement of the 20th century – the movement for civil rights and equal justice.

The Children’s Crusade happened at a critical time in the civil rights struggle in Birmingham.  In April 1963 the Southern Christian Leadership Conference, together with the Alabama Christian Movement for Human Rights and its fearless leader Reverend Fred Shuttlesworth, had started a direct action desegregation campaign in the city.  There were mass meetings, lunch counter sit-ins, nonviolent marches, and boycotts of Birmingham’s segregated stores during the busy Easter shopping season.  Dr. King became one of several hundred people arrested in the first weeks of the campaign when he was jailed for violating an anti-protest injunction on April 12, Good Friday. Four days later he wrote his “Letter from a Birmingham Jail.”  As the days went on with little response from city leaders, a new tactic was raised:  including more children and youths.

Children didn’t face some of the risks adults might including losing breadwinning jobs, and college students (I had the privilege to be among them) had already proven to be extremely effective activists in cities across the South in desegregating lunch counters.  But once it became clear that many of the children volunteering for meetings and training sessions in Birmingham were high school students and some even younger, concern was raised about whether allowing and encouraging these children to protest was too dangerous.  Dr. King later described the decision this way:  “Even though we realized that involving teenagers and high-school students would bring down upon us a heavy fire of criticism, we felt that we needed this dramatic new dimension.  Our people were demonstrating daily and going to jail in numbers, but we were still beating our heads against the brick wall of the city officials’ stubborn resolve to maintain the status quo.  Our fight, if won, would benefit people of all ages.  But most of all we were inspired with a desire to give to our young a true sense of their own stake in freedom and justice.  We believed they would have the courage to respond to our call.”

The children’s response “exceeded our fondest dreams.”  James Bevel, Andrew Young, Bernard Lee, and Dorothy Cotton helped identify and train the students.  For the children May 2 was “D-Day.”  Black disc jockeys were key allies in encouraging and deploying their listeners. Class presidents, star athletes, and prom queens from local high schools led the way as hundreds of children skipped class, gathered at the 16th Street Baptist Church, and marched into downtown Birmingham in groups of fifty, organized into lines two by two and singing freedom songs.  More than a thousand students marched the first day, and many hundreds were arrested. Segregationist police commissioner Bull Connor’s overwhelmed force started using school buses to take the children to jail.   But that first wave of children was only the beginning.  When hundreds more returned the next day, Bull Connor directed the police and fire department to begin using force on the child marchers.  The decision surprised even those used to his meanness and brutality but it was not enough to stop the determined young marchers.  The searing heartbreaking pictures of children being battered and tossed about by powerful fire hoses and attacked by police dogs appeared on front pages around the country and world and helped turned the tide of public opinion in support of Dr. King’s local and the national civil rights movement’s fight for justice.

Marches and protests continued in Birmingham with children leading the way. As some were arrested and attacked, more and more kept coming to take their place leaving Birmingham jails so overflowing that some child prisoners were held at the city’s fairground and others in an open-air stockade where they were pelted by rain.  On May 8 a temporary truce was called and on May 10 an agreement was reached that released the jailed children and others on bond and paved the way for desegregation of Birmingham’s public facilities.  Hateful White segregationists in the city did not give in quietly.  Within hours the Gaston Motel where Dr. King and other SCLC leaders stayed and Dr. King’s brother Reverend A.D. King’s home were firebombed.  Four months later, a bomb was placed under the steps of the 16th Street Baptist Church with a timer set to go off Sunday morning that exploded as children were in the church’s basement preparing to lead Youth Sunday services.   Fourteen-year-olds Addie Mae Collins, Carole Robertson, and Cynthia Wesley and 11-year-old Denise McNair were killed and more than 20 others were injured.

More than a year later, when one interviewer asked Dr. King how he felt after that bombing he first described his despair at thinking that if men could be that bestial maybe there really was no hope.  But, he said, time had eventually “buoyed me with the inspiration of another moment which I shall never forget:  when I saw with my own eyes over three thousand young Negro boys and girls, totally unarmed, leave Birmingham’s 16th Street Baptist Church to march to a prayer meeting—ready to pit nothing but the power of their bodies and souls against Bull Connor’s police dogs, clubs, and fire hoses.”   He told the same interviewer:  “I never will forget a moment in Birmingham when a white policeman accosted a little Negro girl, seven or eight years old, who was walking in a demonstration with her mother.  ‘What do you want?’ the policeman asked her gruffly, and the little girl looked him straight in the eye and answered, ‘Fee-dom.’ She couldn’t even pronounce it, but she knew.  It was beautiful!  Many times when I have been in sorely trying situations, the memory of that little one has come into my mind, and has buoyed me.”

The same example that buoyed Dr. King should inspire us today.  As the Children’s Defense Fund makes final preparations for our 2013 Freedom Schools summer enrichment program that will serve nearly 12,000 children in 96 cities our theme for this year is “Children and Youth as Movement Builders and Change Agents.” We seek to honor on this fiftieth anniversary of the Birmingham Children’s Crusade the role of children and youth who were frontline soldiers in desegregating public schools and public accommodations.   I hope they will inspire us to remind children and youth today that they are not citizens in waiting; they too can be transforming agents for change.