How the Ford Motor Company Won a Battle and Lost Ground

At the infamous Battle of the Overpass Ford Motor thugs ruthlessly beat Walter Reuther and other UAW leaders as reporters and photographers looked on. Despite Ford's denial of the event, news photos documented Ford security men surrounding and beating UAW men and grabbing UAW women.The power of Scotty Kilpatrick’s photographs eventually prompted the administrators of the Pulitzer Prizes to institute an award for photography. 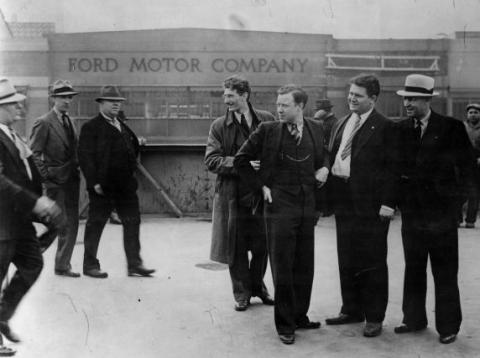 Before the blows began to rain: Walter Reuther (hand in pocket) and Richard Frankensteen (to Reuther’s left)., James Kilpatrick of the Detroit News, Wikimedia Commons

In 1937, Walter Reuther and his United Autoworkers Union had brought General Motors and Chrysler to their knees by staging massive sit-down strikes in pursuit of higher pay, shorter hours and other improvements in workers’ lives. But when Reuther and the UAW set their sights on the Ford Motor Company’s River Rouge complex in Dearborn, Michigan, Henry Ford made it clear that he’d never give in to the union.

On the morning of May 26, 1937, Detroit News photographer James “Scotty” Kilpatrick was among a crowd waiting for the shift change at River Rouge, which employed 90,000 workers.  About 2 p.m. that May 26, Reuther arrived at the Miller Road Overpass at Gate 4 with an entourage of clergymen, representatives from the Senate Committee on Civil Liberties and dozens of women from UAW Local 174, where Reuther was president. The woman wore green berets and carried leaflets reading, “Unionism, not Fordism,” which they intended to hand out to departing workers. At the direction of “Scotty” Kilpatrick, Reuther posed for photographs with UAW organizational director Richard Frankensteen and a few other organizers atop the overpass—public property—with the Ford Motor Company sign in the background.

Then Harry Bennett showed up with his entourage. Bennett, one of Henry Ford’s right-hand men, led the notorious Ford Service Department, a private police force composed of ex-convicts, ex-athletes, ex-cops and gang members.

“You will have to get off here,” one of Bennett’s men told the unionists.

“We’re not doing anything,” Reuther replied. Frankensteen (with his jacket pulled over his head) said members of the Ford Service Department gave him “the worst licking I’ve ever taken.” Photo: James Kilpatrick, Detroit News, Wikimedia Commons

Like that, what would become infamous as the Battle of the Overpass was on. Forty of Bennett’s men charged the union organizers. Kilpatrick called out a warning, but the security men pounced, beating the union leaders while reporters and clergy looked on. Kilpatrick and the other photographers began snapping away. Reporters accompanying them took notes on what they were seeing.

Reuther was kicked, stomped, lifted into the air, thrown to the ground repeatedly, and tossed down two flights of stairs.  Frankensteen, a 30-year-old, hulking former football player, go it worse because he tried to fight back. Bennett’s men swarmed him, pulled his jacket over his head and beat him senseless.

“It was the worst licking I’ve ever taken,” he later told reporters.  “They bounced us down the concrete steps of an overpass we had climbed. Then they would knock us down, stand us up, and knock us down again.” Another union leader was tossed off the overpass; his fall 30 feet to the pavement below broke his back. The security men even roughed up some of the women.

The battle, such as it was, ended almost as suddenly as it had begun. But then there was the matter of witnesses—especially the journalists on the scene. Some of Bennett’s security men began to tear notebooks from reporters’ hands. Others went after the photographers, confiscating film and smashing cameras to the ground. They chased one fleeing photographer for five miles, until he ducked into a police station for safety.

Scotty Kilpatrick fled, too—and made it to his car in just enough time to hide the glass-plate negatives from his Speed Graphic under the back seat. When some Bennett men stopped him and demanded that he surrender his negatives, he handed them unexposed plates.

Once Reuther, Frankensteen and witnesses began to tell reporters what they had seen in front of the Ford plant, Harry Bennett issued a statement. “The affair was deliberately provoked by union officials,” it said. “They feel, with or without justification, the [Senator] La Follette Civil Liberties Committee sympathizes with their aims and they simply wanted to trump up a charge of Ford brutality that they could take down to Washington and flaunt before the senatorial committee.

“I know definitely no Ford service men or plant police were involved in any way in the fight,” Bennett continued. “As a matter of fact, the service men had issued instructions the union people could come and distribute their pamphlets at the gates so long as they didn’t interfere with employees at work.” The unionists, he said, “were beaten by regular Ford employees who were on their way to work on the afternoon shift. The union men called them scabs and cursed and taunted them.”

Meanwhile, Scotty Kilpatrick developed his negatives, and other photographers, after the event, captured on film the injuries to the bloodied Reuther and Frankensteen. “If Mr. Ford thinks this will stop us, he’s got another thing coming,” Frankensteen said. “We’ll go back there with enough men to lick him at his own game.”

Reuther was more composed: “Before the UAW gets through with Harry Bennett and Ford’s Service Department, Dearborn will be a part of the United States and the workers will be able to enjoy their constitutional rights.”

Bennett did his best to put his version into news accounts of the Battle of the Overpass, but once Kilpatrick’s photographs were published, it was obvious that the beatings were far more violent than Bennett had described. And they showed Ford security men surrounding and beating UAW men and grabbing UAW women. In all, 16 unionists were injured in the attack, including seven women. Reuther was pictured bloodied and with a swollen skull, and Frankensteen was even worse—his face cut and his shirt torn and bloodstained. Kilpatrick’s photographs quickly turned public opinion toward the notion that the Ford Service Department was a gang of hired thugs.

In a hearing before the National Labor Relations Board in 1937, the Ford Motor Company was called to defend itself from charges that the company was engaging in unfair labor practices in violation of the 1935 Wagner Act, which prohibited employers from interfering with workers’ efforts to organize into unions. During the hearing, Ford workers testified that if their superiors suspected them of showing interest in the UAW, Ford Service Department men would pull them from the assembly lines and escort them to the gate as they were fired on the spot, often without explanation.

The publicity from the Battle of the Overpass and the ensuing labor-board hearing proved to be too much for Henry Ford. He had tried to raise his workers’ pay soon after the incident in Dearborn, but his efforts came too late, and ultimately, like Detroit’s other automotive giants, he had no choice but to sign a contract with the UAW.

The power of Scotty Kilpatrick’s photographs eventually vaulted Walter Reuther into national prominence as a labor leader and prompted the administrators of the Pulitzer Prizes to institute an award for photography. The first Pulitzer for photography would be awarded to Milton Brooks of the Detroit News in 1942—for his image of UAW strikers savagely beating a strikebreaker.