labor America's Class War: A Dispatch From the Front

No corporate CEO will ever negotiate on behalf of his or her company's employees, keeping their interests as the top priority. So who will? It would be nice to think that the public officials we elect protect the interests of America's working women and men. But too many politicians from both major parties are failing to stand up for the American worker. Who's left? Unions. 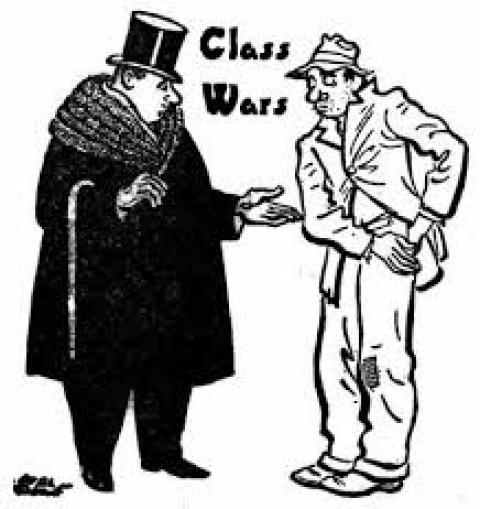 Once again, the facts speak for themselves: Unions are the first and last line of defense for America's workers.

According to Bureau of Labor Statistics data, growth in union workers' average hourly pay and total benefits far outpaced those of non-union members in the first quarter of 2013.

In fact, wages and salaries of union-represented workers grew 4.3 percent in the first quarter of 2013, while those of non-union employees rose 0.8 percent. Yet again, we have proof that there is economic power in an organized workforce.

the most comprehensive effort yet by a think tank of any ideology to bridge what was the most glaring economic policy divide of the 2012 election: the difference between how often candidates promised to restore middle-class prosperity and how rarely they offered detailed proposals to accomplish that.

And guess what? According to CAP, one of the keys to boosting a stagnant middle class is making it easier for workers to form labor unions.

But as the Post noted, conservatives in Washington and across the country "have fought hard" against increased unionization.

Indeed they have. And they have played with marked cards.

Just last week, news agency Reuters reported that at a time when our country needs all the solid, stable jobs it can produce, the non-union retail giant Wal-Mart (with $443 billion in net sales in 2012, the largest private employer in the United States) "has in recent months been only hiring temporary workers."

Wal-Mart U.S. Chief Executive William Simon, whose total compensation in 2011 was a staggering $14,054,824, put his spin on the company's move: "(Workers') hours flex by the needs of the business from time to time," he told reporters the day before Wal-Mart's annual meeting, making clear that his top priority is widening the profit margin. Strengthening the working and lower-middle class is not the Wal-Mart way. "The needs of the business" are the Wal-Mart way.

As if to nail down that point, Reuters observed that Wal-Mart's embrace of an unstable temporary workforce could set an example for some other companies as they look for ways to cushion themselves from a potential rise in health care costs next year." Is it any surprise the company that refuses to sign a legally binding agreement ensuring worker safety in Bangladesh is perplexed by the prospect of paying more to provide health care to its U.S. employees?

A little bit of history: Since World War II, employee productivity in the United States increased at an average rate of 2.2 percent a year. Until the 1970s, wages rose along with it. Produce more, earn more -- we were all in it together.

In the 1970s, the two trends began to separate. Productivity kept going up, but workers stopped getting their fair share. Starting in the 1980s, the separation became more extreme. Union membership started a slow decline in the 1950s. Not coincidentally, that trend accelerated rapidly from the 1980s on.

Since then, deep-pocketed anti-labor forces have spent enormous sums to discredit unions. They cloak their assault in deceptive terms such as "right-to-work," and their divide-and-conquer tactics exploit the frustrations of citizens still reeling from an economic crisis that threatened jobs and retirement security.

And this gambit paid off for the super-rich. In the mid-1970s, the top 1 percent in this country earned 8 percent of all national income. By 2010, this number rose to 21 percent. We now live in a country where the 400 wealthiest individuals have more wealth combined than the bottom 150 million. Once again, we can look at Wal-Mart as a case in point. The Center on Wage and Employment Dynamics dropped a lot of jaws when it pointed out that the six heirs to the Wal-Mart fortune hold as much wealth as the entire bottom 30 percent of all Americans.

No corporate CEO will ever negotiate on behalf of his or her company's employees, keeping their interests as the top priority. So who will? It would be nice to think that the public officials we elect protect the interests of America's working women and men. But too many politicians from both major parties are failing to stand up for the American worker. Who's left? Unions.

The facts speak for themselves: Unions are more necessary, not less, than ever before.

Lee A. Saunders is the president of the American, Federation of State, County and Municipal Employees.