Fulfilling the Promise of Medicare

Nearly five decades after its enactment, here's what we know: Medicare saves money by eliminating all the waste associated with the for-profit insurance industry. And Medicare provides coverage to everyone eligible. In stark contrast, the for-profit insurers condition care on ability to pay ... and then still try to deny care to those who have paid. 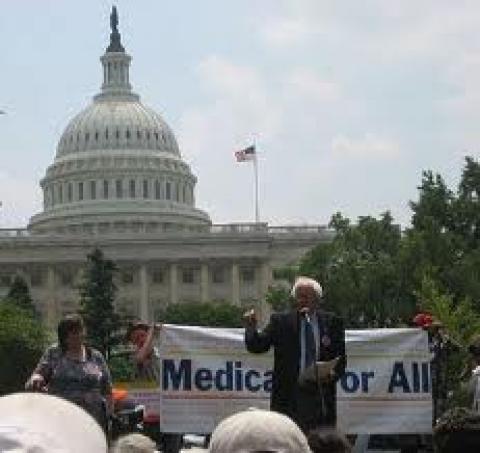 "We can say this of Medicare: By honoring the fundamental humanity, which is the spirit of democracy, it is a triumph of rightness in America."

Nearly five decades after President Lyndon Johnson spoke those words as he signed Medicare into law, it is time to honor the fundamental humanity of all Americans by ensuring that each and every one of us has a right to health care -- irrespective of our wealth or income -- by improving and expanding Medicare so that it covers all Americans.

The benefits that Medicare has brought to older Americans are almost boundless. Millions of Americans have lived longer, more productive, healthier lives because of the medical care they received under this program. Many would have incurred financial ruin, suffered needlessly, and died prematurely without Medicare.

Despite these incredible gains, there are those who want to end close to 50 years of progress in the name of ideological dogma. They oppose the thought of the federal government running anything so vehemently that they want to end Medicare as we know it. These zealots would turn Medicare into a voucher program, cutting benefits and effectively denying millions the medical care they need.

Others propose raising the Medicare eligibility age and similar measures to reduce the government's Medicare bill -- not by controlling health care costs, but by making the elderly pay more. Those proposals, too, are misguided.

Medicare does face cost pressures. The solution is not to take from older Americans, but to end the program's subsidies and giveaways to Big Pharma and private insurance companies.

Nearly five decades after its enactment, here's what we know: Medicare saves money by eliminating all the waste associated with the for-profit insurance industry. And Medicare provides coverage to everyone eligible. In stark contrast, the for-profit insurers condition care on ability to pay ... and then still try to deny care to those who have paid.

That's five decades of evidence that indicates the solution to our nation's healthcare crisis isn't cutting Medicare. It's strengthening Medicare and expanding it to cover everyone.

However the Affordable Care Act ultimately plays out, we know two things for certain: Millions of Americans will remain uncovered and the for-profit insurance industry will remain in charge of prices and life-and-death treatment decisions. As President Obama once stated, the only way to ensure everyone is covered is with Medicare-for-All, a single-payer system.

Medicare-for-All would save $350 billion a year in administrative costs, waste and profits -- savings would be used to cover everyone. Everyone would have free choice of a doctor. Americans would never have to fight with their insurance company ever again.

The richest country in the history of humanity has a moral obligation to cover all of its inhabitants with health care coverage. We believe health care is a right, and should not be treated as a benefit reserved for the privileged.

It's past time for an American health care system that provides universal coverage of all medically necessary services at a fraction of the cost of our current fractured system. The way to do that is to enact H.R. 676, the "Expanded and Improved Medicare for All Act," which will create a single-payer health care system similar to those in almost every other industrialized country.

Today, as we celebrate Medicare's birthday, we urge Congress to fulfill Medicare's promise and enact single-payer legislation and provide Medicare for All.

On Wednesday, July 31, Congressman John Conyers and three other legislators celebrated Medicare's 48th Birthday on Capitol Hill by hosting a briefing by Professor Gerald Friedman who released his study of the funding of HR 676, the Expanded and Improved Medicare for All Act, showing that single payer health care is feasible and would save 592 billion in one year.

Following the briefing, Congressman Conyers was joined by Representatives Mark Takano and Keith Ellison and Senator Bernie Sanders in a press conference to call for enactment of single payer health care.  The events were cosponsored by Physicians for a National Health Program, Public Citizen, and a number of other organizations.