It's unfortunate that diplomacy has now become an accident of U.S. foreign policy. After John Kerry's slip-of-the-tongue in London last week, warmongers in and outside the beltway are sulking at the idea that a peaceful solution might prevent them from going to war in another Middle Eastern country.

Let's also not forget that the U.S. has always had a love/hate relationship with chemical weapons, looking the other way when its former client, Saddam Hussein, gassed tens of thousands during the Iraq-Iran war (including 10,000 innocent Iraqi Kurds in Halabja); White House officials similarly ignored the use of white-phosphorous, an incendiary chemical weapon, by Israel in Gaza in 2008; and then of course there is their own use of depleted uranium during the Iraq invasion.

So what is motivating this policy of "If you don't stop gassing civilians, we will bomb your civilians"? We keep hearing on cable news that if the U.S. doesn't attack Syria, the Iranians may continue to work on their dramatically overhyped nuclear weapons program. But this is a rhetorical feint, meant to obscure a much more grim reality: that Syria is only an appetizer for a much more destructive campaign against Iran, initiated by Israel and destined to be executed by their praetorian American backers.

After all, most of the jihadist forces fighting the Syrian government are not better than the current, odious regime of Bashar Al-Assad, and the U.S. and Israel know it. And so what they strive for is not the downfall of Assad, but a state of perpetual chaos in Syria. This is perhaps why Alon Pinkas, former Israeli consul general in New York, was quoted by the New York Times as saying: "Let them both bleed, hemorrhage to death: that's the strategic thinking here. As long as this lingers, there's no real threat from Syria."

Humanitarian motives indeed. But threat to whom? Prior to the uprising, the Golan Heights, occupied by Israel, were rather quiet for some time. So perhaps the better question is, threat to what? Some may argue that what is "threatened" by a stable Syria is the plan to attack and destabilize the Assad regime's Shia patrons in Iran, a nation which lives in the crosshairs of the United States and Israel, and whose leaders use the threat of foreign attack as justification for a militarist fundamentalism of their own.

Much like Obama, Vladimir Putin is not concerned with the loss of Syrian lives. His interests lie in the billions in arms agreements that his government has with Assad. The Gulf monarchies -- Saudi Arabia and Qatar -- along with Israel and the United States, are interested in alienating Iran. Each of these players continues to make a terrible situation worse by throwing more bombs and guns into the mix, splashing fuel onto a fire with one hand while shaking their sanctimonious fists with the other.

And so the geo-political power games continue, with indisputably bad people on every side surrounding average, innocent Syrians who live under constant threat of death from all parties involved. Back in 2012 I made a film to highlight the plight of Syrian refugees caught in the middle of what one little girl I spoke to referred to as a "soccer match," with Syria as the ball. The title of that film, The Suffering Grasses, was taken from the following proverb: "When elephants fight, it is the grass that suffers." With over 100,000 dead and counting, and the entrance of the biggest elephant of all into the fray, this phrase couldn't be more apt.

Given that ethical concerns are a low priority for the U.S., one would hope that rational self-interest might play some role in their decision-making when it comes to Syria. But the primary financial beneficiary of a U.S. strike on Syria (aside from the jihadists fighting Assad and the hemorrhage-happy Israelis next door) will be Russia. As oil prices invariably rise with a U.S. strike, Russia -- the world's largest exporter, along with Saudi Arabia -- will be the first to profit from skyrocketing oil prices.

Then of course there are the direct costs of war. A single Tomahawk missile costs roughly $1.4 million. Experts have predicted that, putting together the costs of munitions, refueling, and keeping naval vessels within striking distance, even a "limited" cruise missile strike would end up costing U.S. taxpayers hundreds of millions of dollars. Given the slow recovery from the 2008 financial meltdown, and another one likely on the horizon, one would think that American leaders would think twice about spending taxpayer money to assist an opposition that includes al Qaeda in its ranks.

The American people, scarred by lies and fatigued from wars that have profited them nothing, came out in massive opposition to Obama's "punitive" bombing of Syria. It seems they are coming around to the idea that there is no such thing as a humanitarian bombing, and that such conditions for war bring only more war. They are beginning to recognize that, like the slaughtered innocents of Syria, they too are grass suffering under the weight of elephants.

In the end, accidental diplomacy is better than no diplomacy at all. So we must continue to put pressure on our elected officials to move in this direction and to use negotiations over chemical weapons as an opportunity to bring all the major stakeholders -- the Assad regime, the opposition, the United States, Russia, Turkey, Saudi Arabia, Qatar, and Iran -- into further diplomacy that could end the civil war in Syria. Such intervention does not involve more weapons or bombings, but rather brings a framework for ending the violence and moving towards the peaceful democracy that the Syrian people rightly deserve.

To watch the trailer for The Suffering Grasses: When Elephants Fight, It Is the Grass That Suffers, click here. 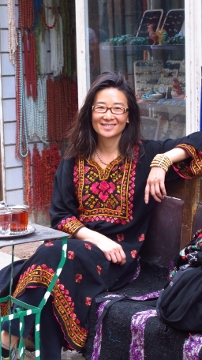 [Iara Lee, a Brazilian of Korean descent, is an activist, filmmaker, and founder of the Caipirinha Foundation, an organization that promotes global solidarity and supports peace with   justice projects. Iara is currently working on a variety of initiatives, grouped under the umbrella of CulturesOfResistance.org, an activist network that brings together artists and changemakers from around the world. At the center of these initiatives is a feature-length documentary film entitled CULTURES OF RESISTANCE, which explores how creative action contributes to conflict prevention and resolution.
As an activist, Iara has collaborated with numerous grassroots efforts, including the International Campaign to Ban Cluster Munitions, the Conflict Zone Film Fund, the New York Philharmonic's groundbreaking 2008 music for diplomacy concert in North Korea. More recently in May 2010, Iara was a passenger on the MV Mavi Marmara, a passenger vessel in the Gaza Freedom Flotilla which was attacked in international waters by the Israeli navy, leading to the murder of nine humanitarian aid workers. Among the many people who recorded the events on that ship, her crew was one of the only to successfully hide and retain most of the raid footage, which she later released to the world after a screening at the UN. Iara is very dedicated to the support of Gazan civilians who have been victims of war crimes committed by the Israeli military during "Operation Cast Lead" and who suffer from the Israeli government's ongoing acts of collective punishment.
At the onset of the Iraq war in 2003, Iara, eager to understand the conflict better, decided to travel and live in the MENA region (Middle East & North Africa). While residing in Lebanon in 2006, Iara experienced firsthand the 34-day Israeli bombardment of that country.]