Last January Cuba gave greater freedom to it citizens than Americans possess when it abolished rules requiring government authorization of travel. Will the president respond and open the door further for us in the New Year? 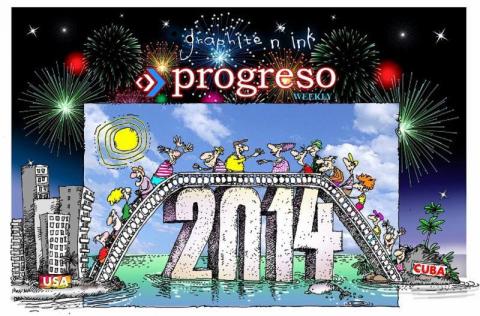 President Obama has opened the door part way for travel to Cuba.

His remarks in Miami in November suggest the White House is preparing to take the next step:

Ten days later Secretary of State Kerry, in his speech to the Interamerican Dialog program at the hall of the Organization of American States, added this specificity:

"We are committed to this human interchange, and in the United States we believe that our people are actually our best ambassadors. They are ambassadors of our ideals, of our values, of our beliefs."

Will the president respond and open the door further for us in the New Year?

It is estimated that 350,000 Cuban Americans returned to their homeland under a general license in 2012 which does not require application to the Office of Foreign Assets Control (OFAC). It is assumed that most of the 98,000 other Americans who traveled used the people to people specific license obtained from OFAC although some were covered by a general license for universities and religious organizations. (OFAC does not release figures on the number of specific licenses issued, nor the names of the recipients, and has no data on the use of general licenses.)

The authorization and renewal process for a specific license is unpredictable, unconscionably slow and expensive in terms of staff time and/or for lawyers. OFAC staff are required to evaluate the motivation of trip promoters and the likely experience of Americans in a country about which they have limited often prejudicial knowledge and no direct experience.

Each decision on a specific license is subject to scrutiny by members of the House and Senate who oppose all travel. They suffered a melt-down when Beyonce and Jay Z were seen in Havana, just as they erupted when Presidents Obama and Castro politely shook hands at the memorial for Nelson Mandela, a high level people-to-people occasion.

OFAC licenses require tightly programmed group travel that can only be undertaken through Cuban government sanctioned receiving agencies and guide/interpreters. The existing tours provide invaluable insight for first time travelers and channel useful contacts, but are inappropriate for families, young people, others on a limited budget, and people who want to create an independent itinerary. Follow-up trips to deepen personal or professional relationships are virtually impossible.

Most OFAC regulations have not been changed since the Bush administration. They are punitive (no souvenirs), discourage normal access by Americans to counterparts (at conferences), and counterproductive, inhibiting spontaneous and informal contact. It is virtually impossible to stay in privately owned bed and breakfasts, rent cars or use public transportation, options available to everyone else in the world.

Licensed U.S. not-for-profits (including my own) and commercial tour operators, travel service providers and charter carriers were responsible for organizing and transporting virtually all legal American visitors. Based on our experience over the last three years, the president should consider modifications in U.S. policy and regulations such as are listed below. Some are in the economic self-interest of current providers; some are not. As a package they will contribute to the goals set forth by the president:

These steps will take an administrative, political and psychological burden off the limited staff of the Office of Foreign Assets Control. They can concentrate on serious commercial violations of embargo law, including any effort to commercialize sun and sand all inclusive holidays.

Opponents of all travel will complain that general licenses permit cheating. No doubt some travelers will slip off for a day or two of relaxation at Playas del Este or Cayo Santa Maria, but that is far offset by the benefit of opening grass roots American interaction with Cubans. No one knows how much time general licensed Cuban American travelers actually spend with family, or even if they have any that qualify, beyond their check of a box on the TSP reservation form.

The elimination of bureaucratic operational costs for current people-to-people organizers and travel service providers will allow them to charge less to clients. Existing businesses and organizations are well positioned to compete in an open market based on their experience and knowledge even as they lose the advantage of a government induced oligopoly.

More significant relaxation of travel restrictions will also open Cuba to a far wider range of our "best ambassadors," including minorities and others who cannot afford current cost levels, and travelers who do not wish to limit their contact with the Cuban people to group tours vetted by both governments.

[John McAuliff is founder and executive director of the Fund for Reconciliation and Development, Dobbs Ferry, NY, a twenty five year old non-governmental organization that worked to normalize US relations with Vietnam, Laos and Cambodia and now Cuba. He was active in the US civil rights movement, including the 1964 Mississippi Summer Project; served in the Peace Corps in Peru then headed the Committee of Returned Volunteers. For a decade he directed the Indochina Program in the Peace Education Division of the American Friends Service Committee, a Quaker organization, arriving in Hanoi for the first of some 50 visits on the day the war ended.]

"Curtain of Water", a new video by photographer Joe Guerriero. He sets out to make sense of the U.S. trade embargo of Cuba. Through conversations with people from all walks of life, in and outside of Cuba, he tries to shed light on the political and human sides of this conflict. Website here