Consider what most Americans know about Rosa Parks, who was born 101 years ago, on February 4, 1913. 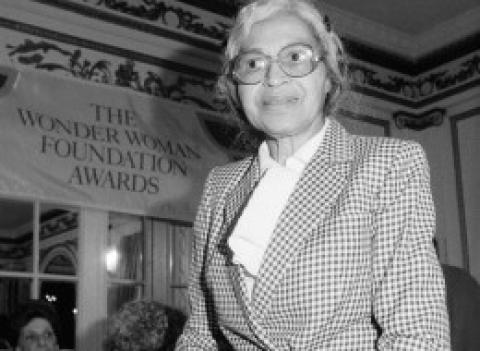 The way we learn history shapes how we think about the present and the future. Consider what most Americans know about Rosa Parks, who was born 101 years ago, on February 4, 1913.

n the popular legend, Parks is portrayed as a tired middle-aged seamstress in Montgomery, Alabama, who, at the spur of the moment after a hard day at work, decided to resist the city's segregation law by refusing to move to the back of the bus on December 1, 1955. She is typically revered as a selfless individual who, with one spontaneous act of courage, triggered the bus boycott and became, as she is often called, "the mother of the civil rights movement."

That popular legend is misleading. Parks' defiance of Montgomery's segregation laws was not an isolated incident. It was part of a lifelong crusade to dismantle Jim Crow. She was a veteran activist and part of a local movement whose leaders had been waiting for the right moment to launch a campaign against bus segregation.

In hindsight, it may appear that the boycott's success was inevitable. In fact, its effectiveness was the result of the Montgomery leaders' decisions about tactics and strategies and their capacity to mobilize thousands of ordinary people in a complex, year-long grassroots challenge to the city's political and economic establishment.

Parks' fierce determination to challenge racism was part of her upbringing. She recalled, "I had almost a life history of being rebellious against being mistreated because of my color.'' Discussing her grandfather, Sylvester Edwards, she wrote, "I remember that sometimes he would call white men by their first names, or their whole names, and not say, 'Mister.' How he survived doing all those kinds of things, and being so outspoken, talking that big talk, I don't know, unless it was because he was so white and so close to being one of them."

In the 1930s, she and her husband, Raymond Parks, a barber, raised money for the defense of the Scottsboro Boys, nine young, black men falsely accused of raping two white women. Involvement in this controversial cause was extremely dangerous for southern blacks. In 1943, Parks became one of the first women to join the Montgomery chapter of the National Association for the Advancement of Colored People (NAACP). In the 1940s and 1950s, the NAACP was considered a radical organization by most southern whites, especially politicians and police officials. Joining the NAACP put its members at risk of losing jobs and being subject to vigilante violence.

In 1943, Parks made her first attempt to register to vote. Twice she was told she didn't pass the literacy test, which was a Jim Crow invention to keep blacks from voting. In 1945, she passed the test and became one of the few blacks able to exercise the "right" to vote. She served for many years as the NAACP chapter secretary and director of its youth group. As NAACP youth director, Parks helped black teenagers organize protests at the city's segregated main public library because the library for blacks had fewer (and more outdated) books, but blacks were not allowed to study at the main branch or browse through its stacks.

One of Parks' closest allies was E.D. Nixon, former chair of the Alabama NAACP and a leader of the nation's first all-black labor union, the Brotherhood of Sleeping Car Porters. Nixon -- a protégé of A. Philip Randolph, a socialist agitator, writer, and union organizer who founded the Brotherhood with the dual purpose of promoting workers' rights and civil rights -- was a gifted organizer and strategist. Nixon, Parks, and other NAACP leaders had frequently talked about challenging Montgomery's segregated bus system and the bus drivers' abusive treatment of black riders.

Parks was also friends with (and occasional seamstress for) Clifford and Virginia Durr, white, upper-crust New Deal progressives who had been active in civil rights efforts -- he as a lawyer, she as a volunteer. Mrs. Durr encouraged (and put up the money for) Parks to attend a 10-day interracial workshop during the summer of 1955 at the Highlander Folk School, a training center for union and civil rights activists in rural Tennessee. Founded by Myles Horton in 1932, Highlander was one of the few places where whites and blacks -- rank-and-file activists and left-wing radicals -- could participate as equals. Martin Luther King, Jr., Andrew Young, Fannie Lou Hamer, John Lewis, and Stokely Carmichael and many other civil rights activists attended workshops there. Throughout its history, but particularly during the civil rights movement, Highlander faced hostility and repression from local and national right-wing politicians, and was briefly shut down in 1961 for violating state segregation laws.

At the workshop that Parks attended, civil rights activists talked about strategies for implementing integration. She recalled:

"One of my greatest pleasures there was enjoying the smell of bacon frying and coffee brewing and knowing that white folks were doing the preparing instead of me. I was 42 years old, and it was one of the few times in my life up to that point when I did not feel any hostility from white people."

The Highlander experience strengthened Parks' resolve, showing her that it was possible for blacks and whites to live in "an atmosphere of complete equality" and without what she called "any artificial barriers of racial segregation."

Bus segregation had long been a source of anger for southern blacks, including those in Montgomery, the state capital. "It was very humiliating having to suffer the indignity of riding segregated buses twice a day, five days a week, to go downtown and work for white people," Parks remembered.

[Peter Dreier teaches politics and chairs the Urban & Environmental Policy Department at Occidental College. His most recent book is The 100 Greatest Americans of the 20th Century: A Social Justice Hall of Fame. An earlier version of this article appeared in Dissent magazine.]