Research shows that emissions of a class of air pollutants are two to three orders of magnitude higher than previously calculated. 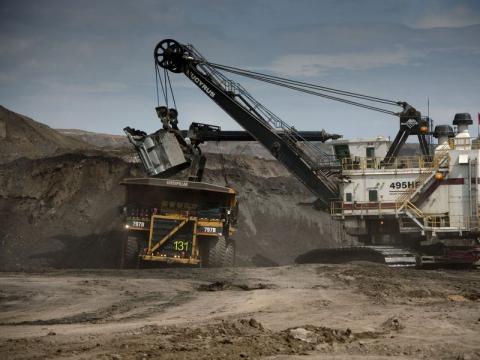 Last week, the U.S. State Department released a report indicating that the proposed Keystone XL pipeline, which would carry oil from Western Canada's Athabasca oil sands to the U.S., wouldn't have significant environmental impacts. It's worth noting, though, that the report didn't say that extraction from the oil sands itself won't have environmental impacts—just that this mining will proceed with or without the pipeline being built.

Your feelings on the pipeline aside, it's well-established among scientists that extraction of oil from these oil sands (also known as tar sands) is environmentally dicey. The petroleum found in them doesn't flow easily like conventional crude—it's a sticky, viscous type formally known as bitumen but more commonly known as tar—so companies have to resort to alternate measures, either surface mining (digging up the rock or sand covering the oil-laden sediment) or injecting steam to get it out of the Earth.

This uses up an enormous amount of water, distributes toxic metals into the surrounding watershed and perhaps most important leads to an estimated 14 percent higher level of greenhouse gas emissions than conventional oil, because some natural gas must be burned simply to convert the bitumen into a usable form.

To this list of concerns, we can now add another. A new study, published today in Proceedings of the National Academy of Sciences, shows that production in the Athabasca oil sands region is leading to the emission of levels of polycyclic aromatic hydrocarbons (PAHs) two to three orders of magnitude higher—that's one hundred to one thousand times greater—than previously thought. These higher levels of PAHs in the area aren't imminently dangerous (they're comparable to levels found in urban areas, which result from burning gasoline in cars and trucks), but they're significantly higher than reported in mining companies' environmental impact assessments and Canada's official National Pollutant Release Inventory.

Frank Wania and Abha Parajulee, environmental scientists at the University of Toronto, came to the finding by looking at previous estimates for the PAH emissions that result from mining (gleaned from the pollutant release inventory and the mining companies' environmental impact assessments) and comparing them to levels of PAHs that they measured in the air in the Athabasca region.

"We found that these estimates are insufficient to explain what's being measured in the environment," Wania says. "The concentrations of PAHs that should be out there, based on these assumptions, are far too low."

The problem: these environmental impact assessments, Wania and Parajulee found, only consider PAHs that are directly released into the air during the oil extraction process itself. But the process generates huge amounts of wastewater that's collected in tailing ponds, and this wastewater contains significant amounts of PAHs.

Impact assessments considered these PAHs "disposed," Wania says. "But when they get mixed up with hot water, that creates ideal conditions for the PAHs to mobilize and enter the atmosphere." When he and Parajulee created a new model that included PAHs evaporating from tailing ponds in their model, they arrived at estimated levels of PAHs in the atmosphere that were much closer to what's been observed.

An aerial view of an Athabasca-region oil mine shows the large tailing pond created to hold wastewater. (Photo via NASA)

Lastly, the researchers created an inverse model—one that started with observed levels of PAHs in the environment, and then calculated the levels of PAH emissions from mining that would be needed to explain them—and found that the true amount generated by mining, processing and wastewater storage is likely two to three orders of magnitude higher than previously thought. Several other mechanisms, including PAH-laden dust being blown into the air after the ground is disurbed by mining, could account for the discrepancy.

As noted, the measured levels of PAHs aren't necessarily alarming, but the EPA does list them as priority pollutants [PDF] because in animal-based lab experiments they've led to tumors, interfered with the immune system and caused reproductive problems. "We live with these concentrations day in and day out in places like Toronto," Wania says, "but it doesn't mean that there are no health consequences."

If nothing else, it is concerning that throughout decades of oil extraction in Athabasca, environmental impact assessments have dramatically underestimated the emissions levels of a key air pollutant. The finding provides one more reason to be worried about how oil sand extraction affects the environment.