The New Populist Movement: Organizing to Take Back America

A populist campaign for economic change must also be a campaign to protect and extend democracy. 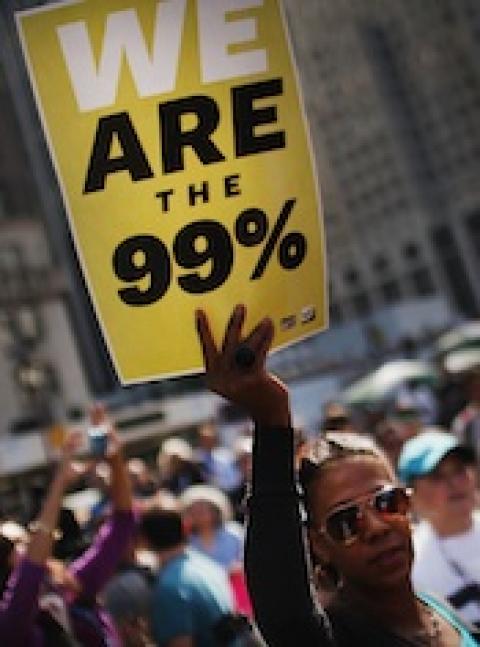 Demonstration in New York City, organized by municipal unions, against the 1%., Comedy Central's INDecision
A new progressive populist movement is rising up in the United States. Inspired by an expansive vision of greater economic opportunity for all Americans, this new movement is also fueled by anger over politicians' broken promises. After decades of recurring economic crisis, which now seems systemic and permanent, millions of Americans have come to realize that much of our democratic system is now owned by a moneyed elite that use their power to resist real change and to manipulate the economy for their own financial gain.

Even the mass media know something big is going on. At the end of November, a Washington Post headline announced, "More liberal, populist movement emerging ahead of 2016 elections." And the New York Times, in a September article, reporting on the new progressive insurgency, cited the excitement generated by Massachusetts Sen. Elizabeth Warren and the new populist mayor of New York, Bill de Blasio. These and other media reports have been based on important new populist victories that represent the visible tip of a very large iceberg:

Political reporters have tended to frame the New Populism as either a challenge to President Obama - or as an agenda and constituency for whoever might run against Hillary Clinton. But hard experience has taught us we need to build an independent force that can fight the big corporate interests and shape a positive agenda for all politicians who claim be for progressive change.

To be clear, this new movement is still coming together, most visible politically in the grassroots campaigns to raise the minimum wage and extend unemployment insurance. It is still too early to know whether the New Populist agenda for change will be embraced by Democrats trying to win back the House and keep the Senate in the 2014 elections - especially since far too many Democrats, including the President, have trapped themselves into claiming the economy is on the mend, when most voters think things are still pretty bad. But politicians wondering what works with the voters should go to the new website, www.populistmajority.org.

Here is a description of ongoing organizing around 12 big elements of the emerging New Populist agenda. All this activity is not completely coordinated, but it is very real, involving hundreds of thousands of organizers who get up every morning and reach out to their neighbors and networks to fight for this economic change agenda and to challenge the interests that have rigged the economic system. And many millions more share the vision of an economic system that works for the majority of Americans. As you can see, the New Populism is on the move.

[Roger Hickey is Co-Director of the Campaign for America's Future. He was a leader of the campaign to stop the privatization of Social Security, and he is a founder and member of the steering committee of Health Care for America Now. In the late 1980s he and Jeff Faux created the Economic Policy Institute.]