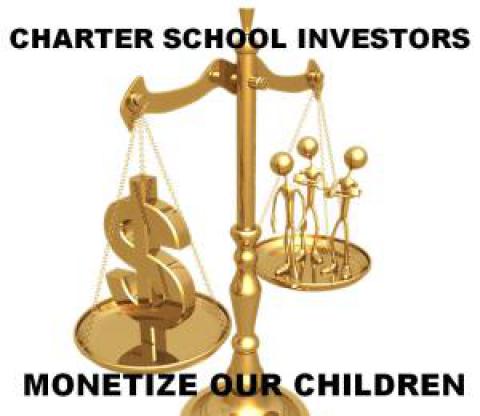 On Sunday, March 23, 2014 in a speech at Riverside Church in Manhattan, New York City Mayor Bill de Blasio, faced with declining public opinion poll numbers, made nice to charter school companies and their wealthy backers. He told congregants that his administration and the charter movement have a common goal and share common ground. But de Blasio should not have made nice. They do not share common ground. Many charters, including those not-for-profits operating by leading de Blasio critics, are about making money for top executives. Educating children, when it actually happens, is at best a by-product.

De Blasio backed off in his criticism of charter school companies and their wealthy backers following a $3.6 million television advertising blitz that accused him of abandoning quality education for inner-city Black and Latino children. The campaign was orchestrated by Eva Moskowitz, founder and chief executive officer of the Success Academy Charter Schools, who has a number of wealthy and politically powerful backers. Governor Andrew Cuomo spoke at a pro-charter rally organized by Moskowitz and targeted extra funds for charters in the state budget. Moskowitz and Success Academy received financial support from 2007 to 2013 from among others the Robin Hood ($1 million), William Simon ($75,000), Tiger ($850,000), Walmart ($4.6 million), MRM ($400,000) and Broad ($11.4 million) Foundations, as well as donations from hedge fund and corporate managers Paul Singer (no relation to me), David Tepper, and Daniel Loeb.

The recent television campaign in support of charters was financed with money from the Walton Family Foundation (Walmart) and hedge fund billionaire Paul Tudor Jones. Jones, less well known than Walmart, was the founder and chair of the Excellence Charter School. After initially being associated with progressive political activities, he drifted to the right and donated heavily to Republican Party presidential campaigns in 2008 and 2012.

Moskowitz targeted de Blasio because he raised questions about the usefulness of the charter schools movement in during his election campaign and blocked her application for three new charter sites in public school buildings. Most of Eva Moskowitz's charges against de Blasio and claims for the superiority of her programs were refuted by Diane Ravitch in a Huffington Post column.

However, operating non-profit charter schools can be very profitable for charter school executives like Eva Moskowitz. Moskowitz earns close to a half a million dollars a year ($485,000) for overseeing school programs that serve 6,700 children, which is over $72 per student. By comparison, New York State Education Commissioner is paid a salary of $212,000 to oversee programs with 2.7 million students or about 8 cents per student. In other words, Moskowitz earns about 100 times more than King for each student enrolled in a Success Academy Charter School. Carmen Farina, New York City School Chancellor is paid $212,000 a year to oversee 1.1 million students or about 19 cents per student.

Charter school operators are not the only Not-for-Profit or social entrepreneurs making money off of public schools. Charles Best created DonorsChoose.org so that public school teachers can raise money to pay for class projects. Best and his non-profit organization have received support from Oprah Winfrey, Stephen Colbert, and the Bill and Melinda Gates Foundation and has been a featured speaker at a Forbes magazine summit on philanthropy. A former public high school teacher in Bronx, New York, he would have been making about $85,000 a year if he remained as a teacher. As a not-for-profit entrepreneur, he makes about three times as much, almost $250,000 a year from Donorschoose.org plus whatever he earns from lucrative speaking engagements.

Jeremy Kittredge is Executive Director of Families for Excellent Schools, which is listed as a sponsor of television advertisements in the current New York Charter School advertising barrage. According to his Linkedin page, he graduated from Brown University in May 2008, became coordinator of Civic Participation at Democracy Prep in November 2008, Executive Director of Democracy Builders in May 2010, and went to work at Families in July 2011. According to the Families for Excellent Schools, Kittredge was also a public school teacher and union organizer but if his Linkedin site is accurate, he must have done those jobs as a teenager before he went to college. On the organizations 2011 tax forms, Kittredge is listed as earning under $40,000 in his half year of employment, but since then he has twice been listed by Forbes magazine as one of their promising 30 Under 30. I have been unable to find out his income since then but I suspect it is higher. The major funder of Families for Excellent Schools is not surprisingly the Walton Family which gave more than $700,000 from 2012 to 2014.

I have one misgiving about publishing these figures. Once Eva Moskowitz sees what CEOs are earning at KIPP, Our World, Harlem Village, and Bronx Prep, she will probably be demanding even more money to run her non-profit charter schools.

[Alan Singer is a social studies educator in the Department of Teaching, Literacy and Leadership at Hofstra University in Long Island, New York and the editor of Social Science Docket (a joint publication of the New York and New Jersey Councils for Social Studies). He taught at a number of secondary schools in New York City, including Franklin K. Lane High School and Edward R. Murrow High School. He is the author of Teaching to Learn, Learning to Teach: A Handbook for Secondary School Teachers (LEA, 2003), Social Studies For Secondary Schools, 3nd Edition (Routledge, 2008), New York and Slavery, Time to Teach the Truth (SUNY, 2008), and Teaching Global History (Routledge, 2011).]