The State of Sharks, 40 Years After Jaws

Yup, we've made it through another shark week. But there is some good news, at least we could be at a tipping point for conserving the infamous predators, if we can keep up shark-friendly practices. 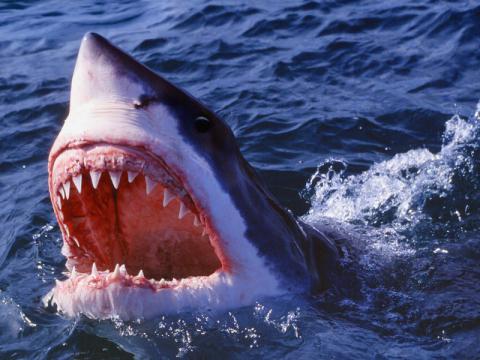 In the public’s mind, the fear of sharks that Jaws initially inspired was soon replaced by fascination, which continues to this day.  Sadly, that fascination has been joined with despair over the last several decades, as evidence has accumulated that shark populations are plummeting, driven by overfishing.  Peter Benchley often stated in later years that he could never again write a book like Jaws, and he devoted much of his post-Jaws career to ocean conservation.

How did sharks get into such trouble in the first place? Sharks and their relatives have been around for more than 400 million years and survived four mass extinctions. Yet they are surprisingly vulnerable to human fishing because, like many long-lived organisms, they reproduce slowly. Great white sharks, for example, may live to be 70 years old or more. Spotty data suggest that females produce on average five baby great whites at a time but give birth perhaps only every other year, starting at about 15 years of age.

So it is no surprise that shark populations have not been able to keep up with losses caused by a worldwide hunting frenzy. Demand for shark fins, often served in Asia as shark fin soup for wedding banquets, New Year’s festivities and government functions, skyrocketed for decades, leading to estimates of 100 million sharks being killed every year.  This translated to a loss of about 6 to 8 percent of all sharks annually, a rate that cannot be sustained by populations that typically only increase by about 5 percent a year.

Yet lately, after years of shark doom and gloom, some good news has started to appear.  How did the situation start to turn around? You can chalk it up to better fishery management, falling demand for shark fins and rising appreciation for live sharks.

Rules and policies designed to protect sharks include shark sanctuaries, banning of shark finning (the taking of just the valuable fins and discarding the often still-living shark), prohibitions on selling and shipping of shark products and changes in fishing gear that reduce the likelihood of sharks being caught by mistake. Thanks to growing public disgust with the practice of finning and awareness of catastrophic drops in shark numbers, demand for shark fin soup is declining in Asia (as are shark fin prices). The Chinese government recently banned the serving of shark fin soup at official functions, a number of large hotels have taken shark fin soup off the menu and a growing list of airlines are refusing to transport shark fins.

In places where tourism is critical to the local economy, the realization that sharks are much more valuable alive than dead has also prompted legal protection. More than 30 percent of the Maldives’ economy is based on shark eco-tourism, and in Palau it was estimated that a shark that brings in $108 dead is worth $1.9 million alive over its lifetime. As a recent headline in the New York Times noted in a story about shark tourism on Cape Cod (not far from where most of Jaws was filmed): “They’re Going to Need a Bigger Gift Shop.”

Most importantly, bit-by-bit, scientists have been finding evidence that shark numbers in some areas are slowly rebounding.  A report this year suggested that numbers of great white sharks seem to be increasing along the east coast of the United States, and similar trends have been reported from California, South Africa and Australia.  Notably, these are all places where harvest of these sharks has been prohibited since the 1990s. Such developments inspire cautious optimism: we could be at a shark conservation tipping point.

Of course, there is still plenty of cause for concern and much work to be done. Some scientists dispute the more optimistic numbers, not all laws are well enforced and no one is arguing for a relaxation of global efforts to conserve sharks. Of the 476 species of sharks analyzed by the International Union for the Conservation of Nature for extinction risk, good data are only available for 276, and of these 123 are considered at risk for extinction.

Still, it is important to celebrate the successes we do have. Around the world, shark-friendly measures are spreading rapidly (see the map above), and there is enormous power in the realization that one’s concerns and efforts are part of a larger and growing effort.

Or as Peter Benchley once put it: “I see the sea today from a new perspective, not as an antagonist but as an ally, rife less with menace than with mystery and wonder. And I know I am not alone. Scientists, swimmers, scuba divers, snorkelers, and sailors all are learning that the sea is worthy more of respect and protection than of fear and exploitation.”

Look, we get it. Sharks are pretty effing cool; the Discovery Channel has been reminding us every year since 1988, just in case we ever forgot. Shark Week has achieved cultural holiness and has led to a public mania about the deep's fearsome predators. Sharks have so permeated our collective consciousness that it seems everybody wants to be a shark. Plus, if we said we never thought about what it would be like if Rob Lowe actually rode sharks, we would be lying. But if you turn on Shark Week this summer, be careful. There's a lot of pseudoscience and straight-up nonsense floating around in the airwaves.

Its existence is highly controversial.

Events have been dramatized, but many believe Submarine exists to this day.

Except here's the problem: it's not highly controversial, Submarine just doesn't exist. As zoologist Michelle Wcisel points out, Submarine is a fabrication from the 1970s created to mess with newspaper readers, and now it has become a device to fool 3.8 million television viewers.

So is Discovery making things up about any other sharks? The answer is an unfortunate and resounding yes. Last year, Discovery aired "Megalodon: The Monster That Lives," which investigated the possibility of the prehistoric 60-foot predator patrolling the oceans today, except that the megalodon has been extinct for millions of years with no evidence to the contrary.

Discovery spokesman Michael Sorenson responded to criticism of "Megalodon" last year in a statement to Fox News. “It’s one of the most debated shark discussions of all time, can Megalodon exist today?" he said. "It’s Ultimate Shark Week fantasy. The stories have been out there for years and with 95 percent of the ocean unexplored, who really knows?”

He's right, in a way. It's complete fantasy. But that didn't stop Discovery from not only rebroadcasting the original "documentary," but going further. If you're looking for more "facts" from "researchers," you can watch "Megalodon: The New Evidence" on Friday night.

Entertainment is entertainment though, right? And as long as Shark Week contributes to a dialogue about how sharks are perceived and protected, Discovery's programming is for a greater good.

But that isn't the case. "Shark of Darkness," the megalodon "documentaries" and articles about where you're most likely to be attacked by a shark all contribute to further misunderstanding of sharks.

Not only this, but people are apparently so fascinated by sharks that they want to eat them. NPR reports that Shark Week's wide viewership has led to a "feeding frenzy," as the vulnerable shortfin mako sharks are finding their way onto plates across the country.

Now conservation programming may not be as sexy as "Sharkageddon," but it's important not to lose sight of the issue. Shark Week has the power to bring the plight of sharks -- not just their power -- to the public's attention.

Until then, don't forget that as terrified of sharks as we are, they face far more danger from us. Check out the infographic below and read more about the toll shark fishing is taking on the world's shark population.