The reality is that schools reflect and reinforce society; they do not transform it. In the United States dating back to the 1920s high schools were organized on factory models to prepare working class immigrant youth for the tedium of factory work and harsh discipline. 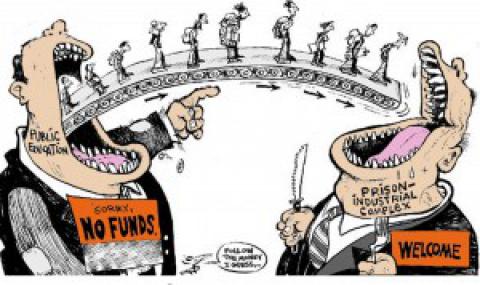 In June 2014 I was interviewed by Susan Modaress of Inside Out for a feature video on the school-to-prison pipeline in the United States. Since then I visited and spoke with graduates of the pipeline at the Green Haven Correctional Facility in Stormville, New York.

Meanwhile, more than half of state prisoners are in jail for nonviolent crimes. Mass incarceration has destructive impact on families, communities, and state and local budgets. It cost $80 billion a year to keep all these people in prison and more than $250 billion to pay for all the additional police and court expenses. According to the human rights group Human Rights Watch, while prison should be a last resort, in the United States "it has been treated as the medicine that cures all ills."

In 2000, over two million American children had a parent in prison. I saw the impact of this on young people at a conference at the City University of New York. Eight students who attend a school for teenagers already involved in the criminal justice system discussed how they grew up in families where parents were incarcerated and its impact on them as children.

Conditions in New York City's Rikers Island prison and scandals in the city's criminal injustice system have repeatedly made headlines in the last year. Correction officers were arrested for corruption and brutality. Mentality ill inmates were routinely mistreated. One mentally ill inmate died in an over-heated cell.

People were detained without trial of conviction for years. Kenneth Creighton was jailed on Rikers Island from 2006 until 2011 while awaiting trial until charges against him were finally dropped. Seventeen-year-old Kalief Browder was arrested in the Bronx and confined on Rikers Island for three years before being released without ever being convicted of a crime. While in Rikers, he spent weeks at a time in solitary confinement. The New York City Correction Department now promises to end solitary confinement for prisoners ages 16 and 17 by the end of 2014.

I have written about the school-to-prison pipeline and Michelle Alexander's book The New Jim Crow: Mass Incarceration in the Age of Colorblindness in previous Huffington Posts. The more I thought about it before the interview, the more I realized that Common Core and its high-stakes assessments are just another piece in the school-to-prison pipeline. This post is based on my notes for the video interview, which can be viewed online.

What role do the school's play in the school-to-prison pipeline?

I work at Hofstra University as a teacher educator now, but I was a high school teacher in New York City for fourteen years working in some very difficult schools. I have also been a guest instructor at Rikers Island, the last stop on the New York City school-to-prison pipeline.

There is a lot of talk about how schools can transform society. The Bush administration's education policy declared "No Child Left Behind," but of course many children are still left behind. Barack Obama demanded that schools lead his "Race to the Top," but it is not clear what direction he wants the schools and students to run. The reality is that schools reflect and reinforce society; they do not transform it. In the United States dating back to the 1920s high schools were organized on factory models to prepare working class immigrant youth for the tedium of factory work and harsh discipline.

Since the 1970s factory jobs in the United States have been shipped overseas. Companies do not need students prepared for factory work, so schools have evolved to perform a new social role. In inner city minority neighborhoods especially Black and Latino young people attend schools organized on the prison model where they are treated as if they were criminals.

Students enter buildings through metal detectors. If the device goes off they are bodily searched. Armed police stand guard. Uniformed security crews that report to the police sweep the halls. Students are forced to sit in overcrowded uncomfortable classrooms doing rote assignments geared to high-stakes Common Core assessments. Stressed out teachers, fearful that they will be judged by poor student performance on these tests, use boredom and humiliation to maintain control of the classroom.

When young people react to these conditions they are disciplined. The ultimate goal of school policy is to sort them out with a few destined for success, some to menial jobs, and others for imprisonment. When these pipeline schools do their jobs well, the young people who fail are convinced they failed because it was their own fault and that they deserve their punishment.

When did this "school-to-prison pipeline" process start?

Multiple forces were at work producing a perfect storm. Starting in the 1960s working class blue-collar jobs disappeared and vocational training in schools largely ended. During the 1970s economic downturn inner city minority schools became chaotic as a result of cuts in funding that have really never been restored. In the 1980s the crack epidemic undermined families in inner city communities and began to fill up the jails. In a world without work, crime became the main employer. Instead of addressing social problems, our society stiffened laws and stuffed people into cells. Private companies went into the prison business and became hungry for profits and raw materials. In the 1990s a conservative coalition that blamed the victims cut into government social welfare programs that were keeping families afloat and the situation worsened. A new zero-tolerance ideology justified tougher laws, mandatory sentences, and stricter treatment in schools. Following 2001, new police tactics like stop and frisk and new technologies that were supposed to protect the country from terrorist attack were used to systematize the punitive nature of inner city minority schools and school-to-prison connection. Add to the mix curriculum organized around boring Common Core test prep drills. The overall affect was to accelerate the exodus of students of color from schools.

What role do gangs play in this cycle?

Gangs are a symptom of the problem. Poverty, unemployment, racism, and government indifference are the problem. Young people turn to gangs when they are driven out of school by oppressive policies, neighborhoods are in decay, they need protection from other gangs, and crime is the major growth industry in their community.

Why is it so hard for these kids to escape from the juvenile justice system?

One, because wealthy people are making money off of their incarceration. Another is deep-seated racism in the United States. Conservative groups use fear of Black and Latino youth to mobilize White voters and win elections. Blacks were outraged by the Trevor Martin murder, they feared for their children. But most Whites accepted the not guilty verdict because they believe Black youth wearing hoodies are potential threats. But the underlying problem is the unwillingness of anyone in government to recognize that the economic system is not working. These young people are surplus - there are no jobs for most of them.

I am not excusing individual behavior and individual choices. Every inner-city Black and Latino youth does not end up engaging in criminal behavior and spending time in prison. Some escape by joining the military. But I am saying that socio-economic circumstances and political decisions by those in power stack the deck against them.

Why are the majority of youths funneled into this system Black and Hispanic?

In impoverished rural communities prisons are the employer of last resort. White men are hired to guard incarcerated Blacks and Latinos. If the prison population more evenly reflected demographics, it would be harder to mobilize White voters to support the system and it would be easier to challenge economic inequality.

Are there specific areas in which we see a higher concentration of this "school-to-prison pipeline" epidemic?

We are looking at inner city minority communities across the nation, but I think the problem is greater in the old Confederate states of the south where public school is at its worst and school performance is at its lowest. Young Black and Latino men are arrested on petty charges and told if they plead guilty they will be released back into the same communities and conditions. If they get picked up for the same petty offenses they are sent to prison for violating the condition of their release. Even if they stay clear of the criminal injustice system, they often lose many of their citizenship rights, including the right to vote.

Can you attribute a lot of neighborhood youth violence and crime to those who have dealt with the juvenile justice system?

The main job training in prison is how to be a better criminal. You get to network with other criminals, you become dependent on gang connections, and they become your family and employer when you are released.

How can we better rehabilitate the youth who have had this experience?

Our society will have to address the lack of opportunity for inner city minority youth if it wants to improve education and close the tap on the school to prison pipeline. I need to use a four-letter word here. J-O-B-S. Without jobs there can be no real education and no rehabilitation. Without jobs young people are going to turn to crime and return to jail. So-called training programs that do not lead to guaranteed employment are just another fraud so private companies can steal government funds.

How can police change their behavior?

When I was a young teacher I too frequently got into battles of will with resistant students. I had to learn I was the adult in the classroom and that the best way to deal with a tense situation was to ratchet down the tension, to calm the student so we could resolve the conflict. This is hard to do in the school and it is even harder in the street, but if police can be trained to ratchet down the tension, I think fewer young Black and Latino young men would be drawn into the pipeline.

What could states do to reduce the financial incentive for keeping youths incarcerated?

The first step is to immediately end the privatization of prisons. But we also need to deal with underlying social and economic problems facing the United States. I am not sure how, but the country must deal with residual racism. The federal Justice department needs to investigate unequal school funding and disproportionate arrest and incarceration rates as examples of racial prejudice and a violation of the 14th amendment. But more fundamentally, the nation must address income inequality. That means tax the wealthy and corporations to improve schools and communities and it means at the completion of school or training everyone is guaranteed a job. That was the dream of Martin Luther King. We need to turn that dream into reality.