On Thursday and Friday, photos on Twitter tagged with #walmartstrikers showed sizable protests in D.C., Pittsburgh, Northern New Jersey, Los Angeles, Long Beach, Calif., and St. Paul, Minn., among other areas. The protests were led by OUR Walmart, a union-backed worker group, alongside community and labor groups in different cities. 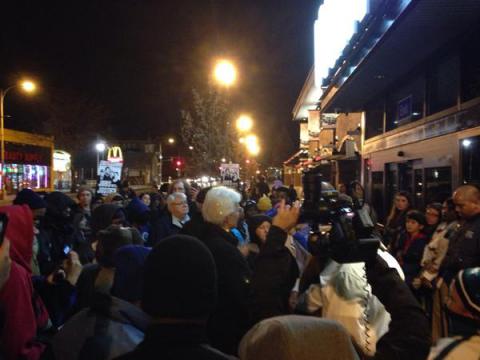 100+ stand in solidarity with #WalmartStrikers on Thanksgiving in DC , DC Jobs With Justice

Dan Schlademan, campaign director of Making Change at Walmart, a project of the United Food and Commercial Workers International Union, said on a call with reporters Friday that he expects the number of strikers to be in the hundreds by the end of the day, though the group could not provide a specific number of workers who'd submitted strike notices to their bosses.

"All the signs that we're seeing is that this is going to be the biggest day ever," Schlademan said.

Brooke Buchanan, a spokeswoman for Walmart, told HuffPost that the retailer was more concerned with serving its customers than with protests it views as union stunts. According to Buchanan, more than 22 million shoppers came to Walmart stores on Thanksgiving alone this year.

"We're really focused on our customers," Buchanan said. "We've got millions of customers coming in [on Thanksgiving] and Friday, and we're making sure they have a safe and exciting shopping experience."

In D.C., a crowd estimated at 200 to 400 people assembled outside the Walmart store on H Street Northwest, calling on the retailer to commit to "$15 and full time" -- a wage of $15 per hour, the same rate demanded by fast-food strikers, and a full-time schedule for those who want it. One of OUR Walmart's top criticisms of the retailer is that part-time workers don't get enough hours.

The protest was large enough to draw the D.C. police, who stood at the store's doors and dispersed the crowd after about an hour.

Melinda Gaino, an employee at the store, said she would be missing three shifts this week while on strike. Gaino took part in a sit-down strike on Wednesday inside the H Street store, where she and other protesters sat on the floor with tape over their mouths, calling on Walmart to end what they called the silencing of workers.

Gaino, a 45-year-old mother of four, said she joined OUR Walmart in August out of concern with some of the challenges faced by her colleagues. Many workers, she said, don't get enough hours to support their families.