“It’s one of the biggest economic stories in the world because the amounts of money are so huge” says Sirota. “It is happening in every state and every city in the country.” 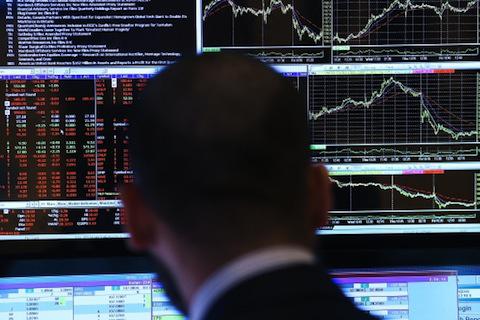 Coverage of the midterm elections has, understandably, focused on the shift in political power from Democrats toward Republicans. But behind the scenes, another major story has been playing out. Wall Street spent upwards of $300M to influence the election results. And a key part of its agenda has been a plan to move more and more of the $3 trillion dollars in unguarded government pension funds into privately managed, high-fee investments — a shift that may well constitute the biggest financial story of our generation that you’ve never heard of.

Illinois, Massachusetts, and Rhode Island all recently elected governors who were previously executives and directors at firms which managed investments on behalf of state pension funds. These firms are now, consequently, in position to obtain even more of these public funds. This alone represents a huge payoff on that $300M investment made by the financial industry, and is likely to result in more pension money going into investments which offer great benefits for Wall Street but do little for the broader economy.

But Wall Street’s agenda goes beyond any one election cycle. It has been fighting to turn public pensions into private profits for quite some time, steering retirement nest eggs into investments that are complex, charge hefty fees, and that generate big profits for management firms. And it has been succeeding. Of the $3 trillion in public assets currently in pension funds throughout the country, almost a quarter of that has already found its way into so-called “alternative investments” like hedge funds, private equity and real estate. That translates to roughly $660 billion of public money now under private management, invested in assets that are often arcane and opaque but that offer high management and placement fees to Wall Street financiers.

Our recent financial crisis demonstrated just how risky and potentially destructive these types of assets can be — so the question becomes, why is so much money going into them?

David Sirota has been one of the few journalists to cover this story in depth, and to expose the widespread political corruption that’s gone along with it. “It’s one of the biggest economic stories in the world because the amounts of money are so huge” says Sirota. “It is happening in every state and every city in the country.”

In 2011 the Wall Street Journal reported that the Blackstone Group — one of the largest private equity firms in the world, with an investment pool of $111 billion dollars — saw “about $37 of every $100” of its funds come from investments from state and local pension plans. That’s a huge sum, and it’s therefore unsurprising that Blackstone lobbies state governments to help steer more pension money its way.

In many cases, the decision to invest state pension money in alternative investments of questionable value seems to have been driven less by concern for the welfare of future pensioners (gasp!) than by political considerations and the concerted efforts of financial industry lobbyists. The simple fact is that these investments are not very good. While they offer lucrative fees for Wall Street middlemen, they have been shown to often significantly underperform against the market.

You’d think that, given the importance of keeping American citizens pensions safe and prosperous, the political representatives overseeing them would hew to safe and stable investments. Unfortunately, however, that presumption would be wrong.

A document obtained by Sirota and published at his previous employer, Pando Daily, reveals that the contract language for a Blackstone hedge fund invested in by the Kentucky pension system contains language such as: “the possibility of partial or total loss of capital will exist” , “there can be no assurance that any (investor) will receive any distribution”; and “the [fund] should only be considered by persons who can afford a loss of their entire investment.” That certainly sounds safe and conservative.

Despite the above warnings, over $80 million of Kentucky pension money went into this and another opaque Blackstone fund. And again, all this was been with almost no public knowledge or debate.

If all this wasn’t egregious enough, a huge preponderance of evidence suggests that this massive transfer of wealth from public to private management is having a corrupting effect on the political process. Sirota’s reporting seems to have particularly touched a nerve with New Jersey Governor Chris Christie, who has described Sirota as “a hack” and “not a journalist”. It’s not difficult to see why Christie isn’t a fan. Earlier this year, Sirota wrote that…

Many of those donations have gone directly to Gov. Christie’s election campaign … Additionally, many of the contributions came either just before or just after the Christie administration awarded the firms multi-million-dollar pension management contracts.

Those 43 firms ended up managing around $14 billion dollars of state pension money, a take that serves as a timeless reminder of the great rewards that can derive from catering to the needs of receptive politicians.

Christie’s tenure as New Jersey governor has been particularly emblematic of the extent of Wall Street’s reach into the public sphere. Among other things, he installed a private equity investor as the state’s pension overseer and publicly lied about the manner in which pension fund investment decisions are made. Ironically enough, he’s defended these practices in his own state while criticizing Democrats for utilizing them through his position as chair of the Republican Governor’s Association.

The flow of public money into Wall Street coffers has greater ramifications than simply putting pension funds at risk and corrupting our political system. It also fundamentally alters the future shape of American society by changing how public funds will get spent. Consider what might happen if pension money were steered into the communities where pension beneficiaries live. Michael McCarthy, an assistant professor of sociology at Marquette University, has highlighted how the Quebec government’s pension investment fund boosts the regional economy:

The fund invests in small and medium enterprises that operate within the province. According to their calculations, by 2012, the Solidarity Fund’s investments created 86,624 new jobs and kept 81,993 more from moving overseas.

Simply put, outsourcing investment decisions to Wall Street instead of giving them to accountable public servants adversely affects where pension investment money goes. When the money is not managed publicly there is no incentive to invest in local infrastructure, and there is nothing to dissuade investors from putting public money into investments that harm the local community, for example by outsourcing local jobs abroad.

“There is a massive transfer of power and wealth happening from the public to Wall Street, through pensions,” says a former Congressional staffer, who asked to remain anonymous because he has ties to the industry.“The more that money goes into private hands as opposed to public hands, the less that it gets invested into projects which are socially constructive.”

“It’s a policy justified entirely on people’s ignorance of what’s going on.”