I can say that in the dozens of times I have visited Cuba, since my first try to swim from country to country back in 1978, I have never once seen a homeless person. I have found a population of educated, polite, intelligent, fit, musical, athletic, compassionate, philosophical, seemingly happy people. So there was a time that I defended Fidel's original vision, that I joined many who touted his success in taking the majority from third world to second world. 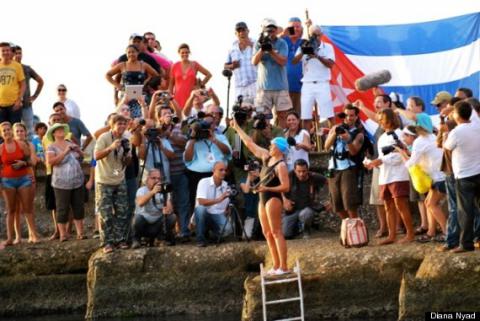 The Cuban Revolution happened when I was a nine-year-old living in Ft. Lauderdale, Florida. Literally overnight, thousands of exiles flooded into my town. We were suddenly eating Cuban food, dancing salsa in my new friends' living rooms. The mystique ran deep. Already a little swimmer, I was standing on the beach at that time and I asked my mother, who had danced salsa many times with my father at the fabled Hotel Nacional in Havana:

And my mother took my arm and pointed it across the sea.

"There. Out there. It's right over that horizon. It's so close, you could almost swim there."

The story I first knew of Cuba was from the exile side. Good people forced out of their homes, given 24 hours to gather of few possessions and cash out at the bank. Their houses, their clothing, their cars, their boats, many of their friends and family never to be seen again.

Then there was the Fidel side. It reads a noble story. Fidel and his comrades in justice Che and Camilo, ride stealth one night on horseback from the mountains into Havana, to save the people from the dictator regime of Batista, where the rich were vastly rich and the poor were desperately poor, with no middle ground. The famous, defiant face of Che has been plastered to millions of young persons' bedroom walls through the years. Che Guevara, Fidel Castro, Camilo Cienfuegos -- soldiers of and for the people.

I have learned the hard way not to take either side, not to speak of the politics of Cuba. Socialism, in its bare bones definition, every individual entitled to the same material necessities, can be interpreted as a just way to manage a nation. On an anecdotal level, I can say that in the dozens of times I have visited Cuba, since my first try to swim from country to country back in 1978, I have never once seen a homeless person. I have found a population of educated, polite, intelligent, fit, musical, athletic, compassionate, philosophical, seemingly happy people. So there was a time that I defended Fidel's original vision, that I joined many who touted his success in taking the majority from third world to second world.

The one thing I could never explain, understand, or defend about the Fidel regime was that Cubans weren't allowed to leave the island. If you love your country, love the life you live there, why is there such fear that a trip anywhere abroad would convince you never to return home?

Clearly, in recent years after the Soviet Union's collapse and withdrawal, Cuba has devolved toward a deeper and nearly tragic state of poverty. Goods have always been hard to come by, but it's been a long time since asthma medicine, cooking oil, and a decent loaf of bread have been on the market shelves.

A couple I have stayed with in Old Havana, both highly educated, with a daughter who has asthma, stand outside the hospital ER in the middle of the night, begging any worker leaving to go back inside and find them an inhaler. Every two weeks they stand in a line to receive one chicken, six eggs, and a few staples. They invite visitors to their "Casa Privada" for dinner, stretching those staples into creative meals so that travelers can tell the tale of eating in a private home, and then they pare back their own family meals to the bare minimum.

Again, just a layman's anecdotal evidence, but it used to be that to discuss a rapprochement with an average Cuban citizen was to encounter tears standing in his eyes, the loyalty to Fidel was so fierce. The giant painted faces of Fidel and Che and Camilo around the city, slogans such as "Viva El Socialismo!" in vivid red below, spoke volumes to the national esprit of having been freed from colonial oppression.

But we are almost six decades past Batista now. The days of the Bay of Pigs are also long-ago history. There is nothing to fear from each other. No reason to further punish each other.

My swim from Cuba to Florida, aside from the personal challenge to make endurance history across a wild, epic ocean, was always meant to also make a statement of hopeful reconnection between our two beautiful nations. Too many, on both sides, have wanted for too long to know each other, to enjoy the colorful Cuban culture, to help the Cubans restore economic stability.

Our Team was invited to Havana this past Labor Day, on the anniversary of our successful crossing from Havana to Key West, September 2, 2013. It was the first time in thirty years that the American and Cuban flags were flown together in an official government building in Havana. The first time the American National Anthem had been played at an official event in thirty years. We wept with pride. And so did the Cubans. We all wept because this Swim was a universal message of will, to Never Ever Give Up. But we wept in part because our two countries understood the magic of the endeavor and the Cubans helped us through every step. We wept because we all want a better life for these good people, our friends and neighbors.

I can tell you our Team was very emotional a few weeks ago, when both President Obama and Raul Castro announced the new era of rapprochement between us.

A personal note: This series for Huff Post carries with it a tag line: 90 miles.

To be perfectly accurate, it is 103 miles, the closest distance between Cuba and Florida. A long time ago, the nautical measurement of 90 was assigned, a measurement used by only large ships at sea. We measure distances across the sea between countries in statute miles. For instance, it is 28 miles around Manhattan Island. That's statute miles. Trust me, it's 103 miles to Cuba. I should know.

One more personal note, to my mother, no longer with us. Mom, it's so close, Cuba, that somebody has actually swum there.

[In the 1970's, Diana Nyad earned her reputation as the greatest long-distance swimmer in the world. Her world records, such as circling Manhattan Island and crossing the 102.5 miles between the Bahamas and Florida, were cause for Diana's induction to many Halls of Fame, including the International Women's Sports Hall of Fame.
Through the next three decades, Diana became a prominent sports journalist and broadcaster, filing compelling reports for National Public Radio, ABC's Wide World of Sports, Fox Sports, USA Network, The New York Times, among other national media outlets.
In 2011, after more than 30 years out of the water, Diana once again captured the world's attention with her gutsy attempts to become the first person to ever swim from Cuba to Florida without aid of a shark cage. Some 1.3 million fans watched as Diana bravely swam some 40 hours (two separate times), once in August, once in September, both times foiled by Mother Nature. Her drive toward Xtreme Dreams has inspired many to live their own lives with similar passion.]

This post is part of a Huffington Post blog series called "90 Miles: Rethinking the Future of U.S.-Cuba Relations." The series puts the spotlight on the emerging relations between two long-standing Western Hemisphere foes and will feature pre-eminent thought leaders from the public and private sectors, academia, the NGO community, and prominent observers from both countries. Read all the other posts in the series here.

If you'd like to contribute your own blog on this topic, send a 500-850-word post to impactblogs@huffingtonpost.com (subject line: "90 Miles").