Black Future Month, Envisioning Where We Go From Here

Everyone knows that February in the U.S. is observed as Black History Month. Though modern observances have become routine and even commercialized, this year we find ourselves in the context of incredible and undeniable Black resistance and resilience – and so there can be no Black History Month as usual. We must seize the opportunity to change the course of history by shaping our future. 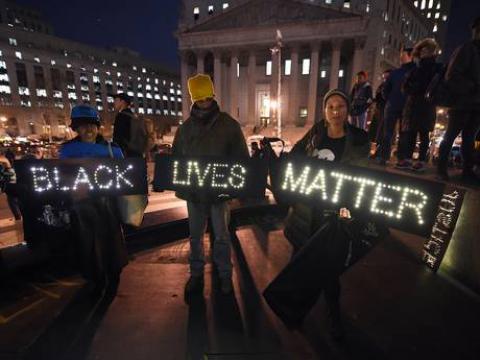 Protesters stand in Foley Square in New York City during demonstration against the chokehold death of Eric Garner. , The Independent

Everyone knows that February in the U.S. is observed as Black History Month. This tradition began nearly 90 years ago when noted scholar and author Carter G.Woodson, himself the son of formerly enslaved Africans declared Negro History Week to highlight and celebrate the contributions of Black people to human history and combat racial prejudice. Though modern observances have become routine and even commercialized, this year we find ourselves in the context of incredible and undeniable Black resistance and resilience – and so there can be no Black History Month as usual.

As a community organizer who holds a degree in History, I understand the fascination with history. However, there is a tendency for many of us to get engrossed in the recounting of our history, which often amounts to purely intellectual activity without material action. In a day and age where every 28 hours a Black person is being killed with impunity, unemployment in Black communities is 12% and Blacks make up 40% of the imprisoned population, we can’t afford to solely commemorate the past. We must seize the opportunity to change the course of history by shaping our future.

Many thought that the abolition of slavery, the end of Jim Crow and the legislative progress of the Civil Rights Era, among other watershed moments, would have fundamentally done away with the racist structures that have long oppressed Black people. However, we know that has been far from the case. There’s been persistent and concerted effort to erode the gains of the Black liberation struggles throughout the years, hindering Black progress. These attacks seem subtle and rational to non-Black communities, as matters of simple policy or social norms. However, they are significant and together constitute structural attacks. Examples included the divestment from the public sector, to attack on labor unions, and laws that criminalize non-violent activity, which leads to obscene rates mass of incarceration.

Anti-Black racism operates at a society wide level and colludes in a seamless web of policies, practices and beliefs to oppress and disempower Black communities. Far from ending, systemic racism reinvents itself to conform to what is publically acceptable. Leaving the quality of Black life diminished and more permanently fixed with each passing decade. And any outcry or attempt to expose this cycle of oppression is often ignored or dismissed by broader US society, because it seems rational or insignificant.

At the same time there are full frontal attacks, and even if when caught on camera, there’s evidence of impunity, as in the murders of Mike Brown or Eric Garner. Sadly, as ColorOfChange has aptly pointed out, the state allows law enforcement to kill Black people at nearly the same rate as Jim Crow lynchings. In light of these egregious cases, and many others, the #Blacklivesmatter movement has been catalyzed across the nation and it is clear that this movement is not solely about extrajudicial killings. Our communities are concerned with their entire quality of life. We are concerned with the systemic attacks on our humanity at a societal level. The violence that says this society is colorblind and so we should remain silent.

The #Blacklivesmatter movement which really began in 2013, in the wake of Trayvon Martin’s murder, and George Zimmerman’s acquittal revealed that anti-black racism is a society wide persistent condition and series of laws and practices that negatively impact every sphere of Black life – and often leads to premature death. This movement has put an end to the myth of a post racial society.

Many are asking activists, where this is all headed. And time and time again media has pronounced this a leaderless movement, that is unclear about its agenda and demands. This is not true and is mainstream society’s way of erasing the courage of the scores of innovative young women and men that have taken up the charge to lay hold of liberation. As we can see, the challenge is widespread and requires a fundamental transformation of our society. And so this is why when we say #blacklivesmatter – we mean all Black lives matter – regardless of gender or sexual orientation, immigration status, physical disability, income level, criminal record, etc. In order to have a democracy that works for all of us we need the entire nation to challenge anti-Black racism and get involved in this movement for all Black lives.

The past is a great teacher, but true students and beneficiaries should always ask, ‘where do we go from here?’ It’s our duty to live up to the legacy of those that came before us and not let the sacrifice of our foremothers and forefathers have been in vain. We must envision our future and actively bend the arc towards justice.

Be sure to read all 28 articles as these visionary leaders tell us how we’ll know when all Black lives matter.

This post is part of the "Black Future Month" series produced by The Huffington Post and Black Lives Matter for Black History Month. Each day in February, this series will look at one of 28 different cultural and political issues affecting Black lives, from education to criminal-justice reform. To follow the conversation on Twitter, view #BlackFutureMonth -- and to see all the posts as part of our Black History Month coverage, read here.