food Why Are You a Picky Eater?

The complicated science behind picky eating is giving experts plenty of food for thought. 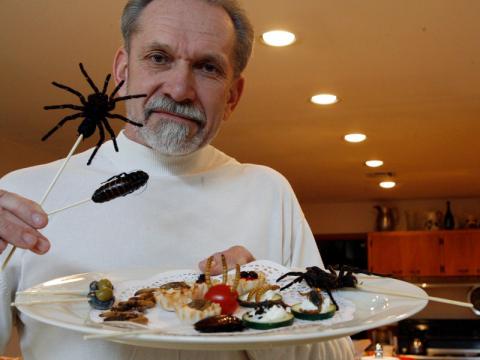 It's not a family gathering without some good-natured squabbles, and chances are picky eating will be the root of a few this holiday season. While children are more likely to turn up their noses at certain foods, they usually grow out of such fussiness. But some adults are picky eaters too, displaying convoluted food preferences beyond allergies or other dietary restrictions.

It's long been known that environment and experience play major roles in shaping an individual's tastes. But science also tells us that many people are genetically predisposed to be picky long before they confront their first plate of Brussels sprouts. There are also neurological and psychological factors at play. Today the complicated science behind picky eating is giving experts plenty of food for thought.

Is Picky Eating in Our Genes?

In many cases, mom and dad have only themselves to blame for unwittingly passing on the genes that can govern finicky tastes. Studies show that genes play a major role in determining who becomes a picky eater, including recent research on a group of 4- to 7-year-old twins. Part of the pickiness can be attributed to specific genes that govern taste. Variants of the TAS2R38 gene, for example, have been found to encode for taste receptors that determine how strongly someone tastes bitter flavors.

Researchers at Philadelphia's Monell Chemical Senses Center, a scientific institute dedicated to the study of smell and taste, have found that this same gene also predicts the strength of sweet-tooth cravings among children. Kids who were more sensitive to bitterness preferred sugary foods and drinks. However, adults with the bitter receptor genes remained picky about bitter foods but did not prefer more sweets, the Monell study found. This suggests that sometimes age and experience can override genetics.

Scientists have also discovered genes that affect sweet and savory receptors and are working to better understand how they operate. This type of targeted genetic work raises the possibility that someday pills or even condiments could be invented that can temporarily "turn off" taste restrictions like bitter sensitivity, helping some picky eaters enjoy foods that they currently despise.

Why Did Picky Eating Evolve in People?

Food is among a human's most basic needs—so why on Earth would people evolve to reject it so regularly? One possibility is that being picky is a defense mechanism to help keep people alive.

Omnivores exploit a wide variety of foods, which means they are less likely to starve than species dependent on only a few resources. However, this culinary style also comes with a disadvantage—those who try many different types of new foods run a higher risk of being poisoned. "If you're a caveman and you're two or three years old, it's not a great thing to be running around and eating berries off all the different trees," says Marcia Pelchat of the Monell Center. "It might be a good idea to be a little bit worried about trying new foods." That would explain why children often warm up to certain foods with repeated exposure—or why a bout with food poisoning might turn someone off the offending meal.

Modern food neophobia, though, presents some challenges to this theory. "During research back in the 1980s, we discovered that people are more reluctant to try new foods of animal origin than those of plant origin," Pelchat says. "That's ironic in two ways. As far as taste is concerned, the range of flavors in animal meat isn't that large compared to plants, so there isn't as much of a difference. And, of course, people are much more likely to be poisoned by eating plants than by animals, as long as the meat is properly cooked."

Can We Train Our Taste Buds?

Human tastes are also strongly influenced by environment and experience. Some research has shown that this process may even begin in the womb with exposure to different flavors via amniotic fluid and continues after birth via breast milk. Repeated exposure to foods like broccoli, for example, at these stages makes children more likely to accept them later. Even at later ages, repeated positive experiences can make certain foods more palatable, especially when combined with peer or social influences.

"The idea is, hey, I tried something new and it was actually good. Maybe new things aren't as scary as I thought," Pelchat says. Still, part of the reason our tastes change as we age may be physiological, like variations in the amount of proteins produced by genes related to how we taste or smell. Take the steroid androstenone, found in both human sweat and the extremely pricy delicacy known as the truffle. While nearly all young children can smell androstenone, about 25 percent of adults cannot. And some adults, including Pelchat herself, were able to smell it again after repeated exposures. "It suggests that there is a gene there, some functional receptor, that’s being turned on and off," she says.

It's also possible that reward mechanisms in our brain can drive changes in taste. Pelchat's team once had test subjects sample tiny bits of unfamiliar food with no substantial nutritional value, and accompanied them with pills that contained either nothing or a potent cocktail of caloric sugar and fat. Subjects had no idea what was in the pills they swallowed. They learned to like the unfamiliar flavors more quickly when they were paired with a big caloric impact—suggesting that body and brain combined can alter tastes more easily when unappetizing foods deliver big benefits.

Is Picky Eating a Disorder?

While picky eating has been around as long as children and vegetables, it has only recently been recognized as a clinical disorder. The American Psychiatric Association's DSM-V, the handbook most commonly used for psychiatric diagnoses, lists Avoidant/Restrictive Food Intake Disorder as a new diagnostic category. But like other psychiatric disorders, picky eating isn't generally recognized medically until it becomes a big problem. "If somebody only eats ten different foods but they are perfectly happy and healthy, they wouldn't fit the diagnosis I don't think," Pelchat says.

In more extreme cases the impacts of this disorder can be serious. People with ARFID may lack the nutrition and calories needed to grow properly as children or maintain a healthy weight as adults. ARFID can also negatively impact social skills, work or school performance, relationships, and self-esteem. Picky eating may also be associated with other psychiatric disorders or conditions, though scientists are just beginning to explore such links in depth. Pelchat noted that numerous studies, including one she authored, have identified a relationship between picky eating and Obsessive Compulsive Disorder (OCD).

"People with OCD might be especially contamination-sensitive," she theorizes. "You can see how that might morph into suspicion about unfamiliar foods or make them unwilling to go to restaurants, for example, because they are worried about cleanliness." Studies also show that children on the autism spectrum are more likely to be picky or restrictive eaters. This can have practical impacts, because if they don't eat a variety of foods and practice swallowing and chewing different types during critical periods of development, it can be much more difficult for an autistic person to learn these food manipulation skills later in life.

It also appears that picky eaters are more likely to be depressed, though the reason behind the link isn't entirely clear. "Depression is generally associated with loss of appetite," Pelchat says. "It's also possible that being picky may in some way make you more likely to be depressed because of the social impacts and isolation, such as the inability to go to restaurants or share meals with friends and family."

Are You a Supertaster?

Not all tongues and taste buds are created equal—you may be a supertaster and not even know it. Yale University's Linda Bartoshuk coined this term for people, perhaps one in every four, whose tongues send a far stronger than normal taste signal to their brains. The long held-theory is that supertasters have genes that bestowed them with an extraordinary numbers of taste buds, although a recent crowdsourcing study challenged this notion.

Super-sensitive taste may sound like a culinary dream—the more flavor the better! But those extra taste buds often cause supertasters to avoid strong or flavorful foods and drinks like rich desserts, greasy ribs, coffee and spicy peppers because they are simply overpowering. Supertasters tend to crave neither fats nor sugars, and they especially avoid the bitter molecules found in some vegetables, like broccoli and turnips. Those with supercharged taste buds tend to be thinner and have better cholesterol profiles than the rest of us precisely because they don't feel the urge to eat many delicious but not-so-healthy foods as often or in large quantities. On the other hand, these people may be at higher risk for cancers because they skimp on veggies.

Taste is about much more than the tongue. Smell is intimately involved in the experience, the better to help the human animal find and eat the victuals necessary for survival. Visual appearance and texture play major roles in what we perceive as "tasting" food.

But for a select group of people with the neurological condition synesthesia, taste and other senses are actually blended together. For some synesthetes, smells also appear as colors and three-dimensional textures or shapes. Others experience colors, shapes, sounds and even words as flavors that they "taste." Such people graze a smorgasbord of "eating" experiences even when there is no food in sight. Magnetic-resonance imaging shows that taste regions of their brains light up when experiencing words or other stimuli, and after a day of experiencing this kind of taste they may be less interested in actual food.

Studies are just beginning to unravel how the brain tastes words or sound in synesthetes. And while only a few people are impacted directly by this type of synesthesia, studying it could reveal the complex workings of brain pathways and functions that also exist in other people but normally function at a much lower level.

Humans Aren't the Only Picky Species

It won't be news to families with cats or other finicky pets that other animals have evolved to be picky eaters. The rat is one surprising example. This ubiquitous animal exists around the world and is commonly thought to eat whatever trash may present itself. The truth is that rats tend to be more discriminating as a matter of survival, because they are unable to vomit.

During the 1950s John Garcia ran rat experiments that showed the animals would avoid sugar—something nearly all animals love—when consumption was paired with a radiation stimulus that made the rats feel sick. The study helped to show how rats pick tentatively at new foods to defend against poisoning, waiting to ensure that they don't become sick before adapting to eating something regularly.

Scientists have also seen picky eating among predators, including birds like zebra finches or European blackbirds, and among fish like the three-spined stickleback. In a Cardiff University study, these fish showed that color impacts their appetite, with some individuals rejecting their favorite plankton-like prey when scientists used dye to turn a familiar meal a different hue. But other individual fish readily gobbled up their prey despite the new color, showing that fish, like people, can range from picky to prodigious eaters.