How Racist Is Solitary Confinement?

It hardly bears repeating that people of color are incarcerated in staggering numbers. But a new study authored by health officials with the New York City Department of Health and Mental Hygiene (DOHMH) shows that racial disparities in jail run far deeper: black and Hispanic inmates are vastly more likely to be punished with solitary confinement than their white counterparts, and less likely to receive diagnoses of mental illness. 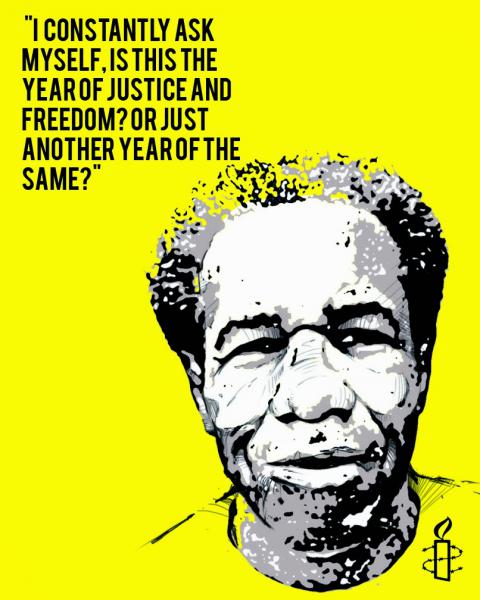 Anthony Cruz leaned in over the low plastic table between us, his bony knees knocking its edges, his eyes wide and full of a happy urgency that felt out of place against the dull cement block walls of the jail visiting room. We were sitting in the Vernon C. Bain Center, a facility that’s part of the New York City correctional system and is built on a barge floating in the waters south of the Bronx. His face, narrow with prominent cheekbones, suggested a life fully lived, even though he’s spent nearly all of his adult years behind bars, both on Rikers Island and in Attica Correctional Facility, a maximum security prison upstate. I asked him why he was so cheery. He said it was his medication, that he was on Abilify and Seroquel to treat his mental illness.

Cruz, who is 31, said his mental break occurred 12 years ago, while he was in solitary confinement. He was incarcerated at Rikers in 2002, when he was 18 years old, on a first degree manslaughter charge. He was a Blood at the time, and he said the killing was done in self-defense. A few months later, Cruz was put in solitary.

When he got out of the box, Cruz said, he was diagnosed with bipolar disorder, though his current mental health records note only that he has adjustment disorder and anti-social personality disorder. Over the course of the two years and eight months he spent at Rikers, he was put in isolation several more times — for drugs, for fighting, because someone planted a razor in his mattress.

Cruz said he went to trial straight from the box. At his court date, he was dressed all in red, his hands covered with mittens. “I looked crazy!” he said, his long arms swimming in his overlarge gray jumpsuit. He was sentenced to ten years at Attica.

It hardly bears repeating that people of color like Cruz, who is Black Hispanic, are incarcerated in staggering numbers. But a new study authored by health officials with the New York City Department of Health and Mental Hygiene (DOHMH) shows that racial disparities in jail run far deeper: black and Hispanic inmates are vastly more likely to be punished with solitary confinement than their white counterparts, and less likely to receive diagnoses of mental illness. The study, which is based on the records of 45,000 first-time inmates in the New York City jail system between 2011 and 2013, found that black people were 2.52 times more likely than whites to be put in solitary, where inmates spend 22 to 24 hours a day alone in a cell. Hispanics were 1.65 times more likely to enter solitary. And while blacks and Hispanics represented 40 and 46 percent of the study population, respectively, they comprised a much smaller portion of those admitted to the jail system’s mental health service: 16 and 13 percent. Twenty-two percent of mental health patients were white, though they made up just 9 percent of the study.

The federal government does not keep track of the racial composition of the roughly 80,000 people in solitary in America, though the study findings fall in line with data from a handful of states suggesting that people of color in other jurisdictions are locked in extreme isolation at similarly disproportionate rates.

“Jail is a microcosm of society,” said Dr. Daniel Selling, who ran mental health services at Rikers until mid-2014. “A lot of society thinks that black and brown people are criminals.” Diagnosing mental disorders is a very subjective process, he added. “You’re using objective criteria, but three different people could come up with three different diagnoses.” Racial bias creeps in. White inmates, the study found, are more likely to be diagnosed with mental problems that are generally thought to be more “legitimate,” disorders like anxiety or depression — afflictions that respond well to medication. White patients are also more likely to be diagnosed with “serious mental illnesses” like schizophrenia or bipolar disorder, both of which exempt prisoners from solitary in New York state, can help them secure benefits when they’re released, and tend to elicit more sympathy. Whites are also more often diagnosed within seven days of being incarcerated.

Although jail medical staff are less likely to give black and Hispanic patients a mental health diagnosis, when they do they will more often assign these inmates mood, adjustment or antisocial personality disorders. The latter can be “pejorative,” Selling said, meaning the diagnosis is more of a reflection of a negative interaction between the patient and the clinician, “where maybe somebody was a dick because they were angry or they were frustrated.”

According to the study, a black or Hispanic inmate is more likely than a white inmate to be diagnosed with a mental illness in conjunction with solitary, and later in his jail stay — meaning he’s more likely to receive a diagnosis either because he has already been psychologically damaged by solitary, or because he’s acting out to avoid the box, lighting a fire in his cell, say, or banging his head on the wall, or cutting himself. Among those with a late mental health diagnosis included in the study, close to 40 percent of blacks and 26 percent of Hispanics experienced solitary during their incarceration, while only about nine percent of whites did.

One inmate, Damian Jackson, who was cited in last year’s Justice Department report on brutality in Rikers’ adolescent jail, told me that a white officer called him a “black fuck” and a “black motherfucker” before beating him and three other inmates with radios, batons and broomsticks in August 2013. After the assault, Jackson was thrown in solitary — known as the bing — for 200 days, where he said he passed out from the heat and from concussions caused by the beating. When he was released, Jackson said, “they put me on psych meds.”

Johnny Perez, who spent three years in solitary in New York state prison and is now an advocate at the Urban Justice Center, remembers an officer who had a tattoo of a black baby with a noose around its neck. “He’d roll his sleeve up and walk around the jail,” Perez said. Rikers inmates routinely report guards’ use of racial slurs to the Urban Justice Center, according to a December report by the New York Advisory Committee to the U.S. Commission on Civil Rights.

“Racism is a blunt thing” in jail, said Five Mualimm-ak, the director of Incarcerated Nation, a group pushing to end the use of solitary confinement, who himself spent five years in isolated confinement in the New York state prison system. “You start talking to people and they’ll say, well, I was put in here because a guard said, ‘I don’t like black people.’ Like, literally. They’re like, “Hey, n*****, you’re going to the box.”

Inmates can be disciplined for something as petty as refusing an order, or not returning a food tray, or talking back to an officer. Or for attempting suicide. And jail staff have broad discretion in sending someone to the box. Inmates have no right to counsel at disciplinary hearings, and lately at Rikers there have been “a lot of due process violations,” said Barbara Hamilton, a staff attorney at the Legal Aid Society who represents New York City inmates appealing disciplinary tickets. She said that inmates prevail in about 10 percent of appeals.

“When you have very little oversight and little controls on systems of extreme punishment, what you see is discrimination and animus works its way in,” said Amy Fettig, the senior staff counsel for the ACLU’s National Prison Project. “It’s an epidemic in nearly every place of correction in this country.”

The U.N. Special Rapporteur on Torture, Juan Méndez, has declared that isolating humans for more than 15 days constitutes torture and should be subject to an absolute ban. On Tuesday, President Barack Obama denounced America’s overuse of solitary confinement. The combination of sensory deprivation, extreme idleness and lack of human interaction has long been shown to cause severe suffering and psychological damage. Yet throughout the United States, prisoners languish in solitary for weeks, years, even decades.

New York City, which holds about 500 people in solitary, recently limited isolation to 30 days at a time, with seven days between stints, and no more than 60 days per year. But the Department of Corrections is allowed to override these limits in certain cases and is pushing hard to have the rules partly reversed. The settlement the city reached with the Justice Department in June places restrictions on the use of solitary for 18-year-olds, and requires an independent review of the jail’s infraction process — though, again, DOC can reject proposed changes if they are “unduly burdensome.” (New York City recently eliminated solitary for 16 and 17-year-olds and will end the practice for anyone age 21 and under by January 2016.)

After spending three years of his 13-year New York state prison sentence for first degree robbery in solitary, Johnny Perez was released in 2013. He said he coped with solitary by focusing on not dying. “You hear about all the things other people are going through: the suicides, people being extracted from their cells to be beaten. All you hear is screams. I had suicidal thoughts,” he said. “You have this thought, like, I’m fucking losing it in here.”

Mualimm-ak, who spent 43,000 hours in solitary, said he didn’t have his medication for schizophrenia and bipolar disorder in prison, and that his behavior got him thrown in the box. “You’re in your cell and have two voices screaming at you who are opposite sexes. The wind under your door is talking to you, telling you to kill yourself. The guard’s radio is transmitting my thoughts to the jail.”

Clinicians at Rikers are asked to evaluate whether mentally ill inmates will be able to withstand solitary, even though doing so conflicts with their duty to put patients’ wellbeing first. “It’s like the doctor that checks you after water boarding and says, ‘He’s alive,'” Mualimm-ak said.

“If they’re not mentally ill when they go in,” Legal Aid’s Hamilton said, “then they are when they get out.” About half of the people in solitary at Rikers are mentally ill, according to testimony at a recent Board of Corrections meeting by Dr. Homer Venters, the assistant commissioner for the city’s Bureau of Correctional Health.

Around the country, at least 30 percent of those in isolated confinement suffer from mental illness, according to the latest comprehensive report on the issue, done in 2003 by Human Rights Watch. A 2009 state audit of three prisons in Wisconsin found that up to 76 percent of the prisoners in segregation were mentally ill.

When Anthony Cruz was released from prison in 2012, he turned straight to drugs, including ecstasy. The outside world was too much for him after those 10 excised years, half of which were spent in solitary. His only company had been the poetry and books he wrote for himself — and the feces, urine and semen that prisoners across the way would throw at him. In 2013, a year after he got out, he was incarcerated briefly for possession. This June, he was arrested again. Drugs again. Now he’s back in jail, waiting to get out.