The Iran deal's political survival means many things at once. It signals the decline of AIPAC and the Likud lobby. But it also marks a crescendo of a politically mature constituency for peace and diplomacy. It's a milestone in the ascendancy of a grassroots movement stirred to action by the Iraq war that has been building steadily since, a force that will shape the politics of war and peace in 2016 and the years beyond. 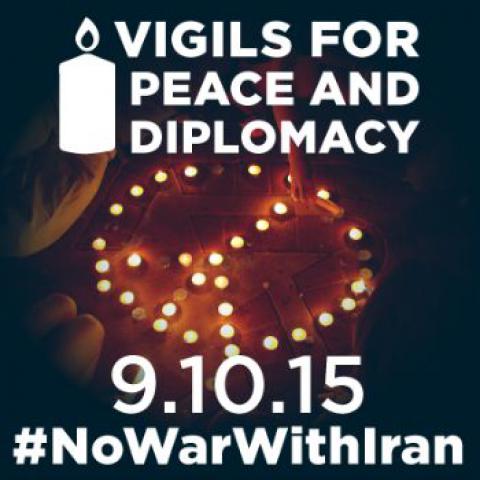 At midnight tonight, the clock stops. The congressional review period for the Iran nuclear deal expires, and the opponents of the deal officially lose their chance to torpedo the landmark foreign policy achievement of the Obama era. Thanks to 42 Democratic and Independent Senators, the GOP-driven sabotage bill never even reached the president's desk, and the United States has moved off of the path to war with Iran.

It's a moment worth marking: the visible sign of a tectonic shift in the politics of American foreign policy.

The Iran deal's political survival means many things at once. It signals the decline of AIPAC and the Likud lobby, a masterfully executed vote-whipping operation driven by the White House, Dick Durbin and Harry Reid in the Senate, and Leader Nancy Pelosi, Rep. Jan Schakowsky, Rep. David Price, and Rep. Lloyd Doggett in the House.

But it also means something more, something largely missed in the many write-ups of how the victory was forged. The success of the Iran nuclear deal marks a crescendo of a politically mature constituency for peace and diplomacy. It's a milestone in the ascendancy of a grassroots movement stirred to action by the Iraq war that has been building steadily since, a force that will shape the politics of war and peace in 2016 and the years beyond.

In mid-July, when the seven-country negotiations finally ended and the Iran Joint Comprehensive Plan of Action was unveiled, today's moment of victory was anything but assured. A front-page New York Times story detailed a $20 million campaign plan, backed by the American Israel Public Affairs Committee (AIPAC), to sink the deal. Former Republican Sen. Norm Coleman helmed another $10 million attack, while neoconservative hawks ranging from Joe Lieberman to Dick Cheney geared up to join the fray. The deal's opponents promised -- and pundits expected -- a 2009 Tea Party-style uprising during the August congressional recess that would send members of Congress running for cover.

As the Washington Director of MoveOn.org, I experienced the D.C. effort to support the deal from the inside. On paper, the pro-diplomacy coalition looked hopelessly outgunned. The coalition of nuclear policy experts and peace advocates who were lobbying Congress couldn't come close to matching the resources of the hawks. The widespread assumption was that the GOP would pass a resolution of disapproval through both houses of Congress. Our modest and urgent goal, then, was to retain enough Democrats to sustain a presidential veto. I remember a fierce private debate about whether we should give up on the Senate entirely and focus all of our energy on the House.

And as for the grassroots, out beyond the D.C. bubble? The prevailing wisdom was captured well by Peter Beinart in a piece this April: "It's notoriously hard to mobilize Americans against wars until those wars begin."

What few realized, however, is that the war had already begun -- in 2003. Millions marched against the war in Iraq. In the wake of that disastrous conflict, a network of new and newly revitalized organizations arose, groups capable of channeling public outrage about a war-first foreign policy into concrete political power. The energy of this movement coursed through the Howard Dean campaign, sparked the primary challenge to Joe Lieberman, and helped electrify the fight to send Barack Obama -- a candidate vocally opposed to needless war and ready to take heat for his commitment to diplomacy with Iran -- to the Oval Office. As it turned out, those anti-war marchers from the Bush era had never given up. In fact, they fundamentally shifted the center of gravity of the Democratic Party.

Yet conventional wisdom held that AIPAC and its allies were unbeatable. In fact, the anti-war grassroots had helped defeat them only last year, in a largely unnoticed skirmish that presaged this year's Iran fight. From late 2013 to early 2014, insiders were caught off guard as an AIPAC-backed bill intended to derail the Iran nuclear negotiations was itself derailed by, as the National Journal put it, "the re­sur­gent pro­gress­ive move­ment." Alerted to the moment by groups like MoveOn.org, J Street, DailyKos, and CREDO Action, grassroots activists poured hundreds of thousands of petition signatures and more than 10,000 phone calls supporting diplomacy into congressional offices, backed up by constituent meetings in Washington, D.C. and across the country. Soon, even co-sponsors of the bill backtracked on their support, and it died on the vine.

This summer's showdown was even bigger. Per the final tally tracked by Win Without War, a 37-group coalition of which MoveOn.org is a member, grassroots supporters made 141,631 phone calls to Congress after the deal was finalized on July 14. We sent 288,990 emails to congressional offices and collected 1,181,307 petition signatures supporting the deal.

And we took to the streets. On a single day of action in August, local supporters organized 207 public events attended by thousands of people. To counter the threatened Tea Party outbursts at local events, pro-deal activists traded notes on 258 upcoming August recess public appearances by members of Congress, turning out supporters to town halls, debates, and farmer's markets from coast to coast. And vocal constituents visited hundreds of congressional offices in their home districts and in Washington, D.C. to press their case.

The deal's opponents haven't released their numbers. But from all available indications, despite their vast war chest, they were out-organized. At 87 percent of the events we tracked (and we tracked all we could), Iran deal supporters outnumbered opponents. Meanwhile, congressional offices have indicated that the volume of phone calls from each side roughly balanced out -- but not all calls are created equal. One Senate staff assistant told me that during anti-deal calls, she could often hear phone bank operators telling confused callers what to say before patching them through.

As they say, there are some things money can't buy. Authentic grassroots intensity is one of them.

To win, our effort had to be broad as the public's support for an alternative to war. The coalition spanned peace and security groups, veterans, faith groups, civil rights organizations, the netroots, and beyond. MoveOn staffed up an election-style field program, with nine full-time No War With Iran organizers supporting local activists in key states. J Street, the pro-Israel pro-peace group, pulled out all the stops, organizing speaking tours with pro-deal Israeli generals and commissioning polls showing wide support for the deal among American Jews -- puncturing specious claims by opponents. After hundreds of thousands of members of 24 national groups signed a joint petition coordinated by CREDO Action, leaders of the Congressional Progressive Caucus stood outside the Capitol to receive it in person and pledge their support for the deal. The Ploughshares Fund, the National Iranian American Council, Democracy for America, Friends Committee on National Legislation, Peace Action, Council for a Livable World, VoteVets, and dozens of other groups all poured time, resources, and effort into the fight. And an extraordinary array of nuclear scientists, retired generals and ambassadors, and other experts and authorities took the time to answer every question and debunk every myth as soon as it arose.

Thanks to the ferocious grassroots response, even the opposition's greatest coup backfired. On August 7, New York Sen. Chuck Schumer announced his opposition to the deal. As the Senate's presumptive Democratic Leader-In-Waiting, Schumer could have triggered a wave of defections. But the lightning response to Schumer's move was so scorching, and so visible, that almost no other Democrats followed in his footsteps. MoveOn members launched a "donor strike," vowing to withhold $42 million in political contributions if Democratic votes undercut the Iran deal -- and then deployed the "SchumerMobile," a billboard mounted on the back of a truck depicting Schumer, in the style of a high school yearbook, as the Senator voted "Most Likely to Start a War." As more and more activists and groups voiced their anger at his decision, joined with aggressive pushback coming from the White House, journalists began wondering aloud if Schumer's bid for Democratic Leader might be imperiled by his alienation of the party's grassroots base.

It wasn't just a message to Sen. Schumer. It was a message to all Democrats that opposition to the Iran deal would invite accountability from the grassroots. Primary voters and progressive activists across the country had worked to elect Senators and Representatives who would prevent the next Iraq war, and they wouldn't take betrayal sitting down.

It worked. Word on the Hill was that every Senator noticed what happened to Schumer--and that some offices who had been poised to oppose the deal pulled back to avoid the same fate. Ultimately, the vast majority of Democrats in both houses of Congress supported the deal--with more than enough votes to protect it in either chamber.

This was the rare political fight where, on the progressive side, everything seemed to click. Just a few months before, grassroots progressives and the White House were utterly at odds over the Trans-Pacific Partnership. That conflict will flare up again -- but on Iran, there was no daylight between the grassroots and the Oval Office. Similarly, any supposed gulf between the administration and its congressional allies was nowhere to be seen. And in sharp contrast to Hill negotiations where policy experts watch in horror as one after another key detail disappears amidst political horse-trading, this--the most comprehensive anti-nuclear proliferation accord ever negotiated -- remains fully intact.

This win had many authors. Tremendous credit has been rightly accorded to President Obama's team and to the leaders of the pro-deal effort in both houses of Congress. We all owe a debt of gratitude to the technical experts who helped shape the deal and communicate its contents. And it's true that the deal's opponents made a series of strategic missteps, particularly by making the opposition to the deal so bleakly partisan. You don't win Democratic votes with rallies outside the Capitol helmed by Glenn Beck, Ted Cruz, and Donald Trump, or with transparently partisan speeches to Congress by foreign heads of state invited without consulting the President.

But if the analysis ends there, without mentioning the crucial role played by grassroots activists, then we lose sight of one of the most significant consequences of the Iran vote.

In the coming year, candidates for House, Senate, and the Presidency will be crafting their agendas. Lists of potential nominees to foreign policy posts will be compiled. As the Iran fight demonstrated, anyone seeking to build a winning coalition around a vision for America's role in the world would be remiss to forget the power of the progressive grassroots.

Today, foreign policy is not the sole domain of insiders. It is not controlled by a small group of lawmakers, think tanks, and check-writing, lobbyist-hiring interests that don't share the American public's belief that war should never be a first resort.

The day before the vote, I visited undecided Democrats in Congress with a group of people who knew the price we paid for getting this wrong before. Retired generals, combat veterans -- and a Gold Star mom, whose son had died in Iraq on Memorial Day. Each had a personal story, and personal plea, of extraordinary power.

Their voices were heard. Their voices won't go away. On profound matters of war and peace, the public will not stop paying attention -- which means that future decisions, like the Iran deal, will be subject to that most fundamental of political powers: democracy.