Win For Bernie: AFL-CIO Holds Off On Endorsement

In a major win for backers of Bernie Sanders, the AFL-CIO has decided to remain neutral in the Democratic primary. 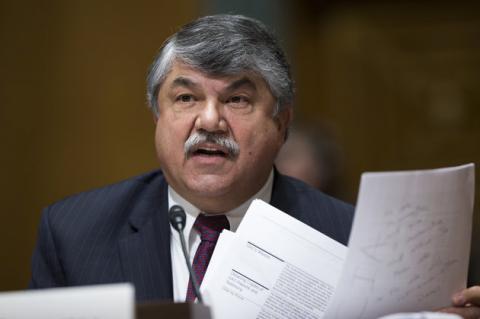 AFL-CIO President Richard Trumka testifies in Washington on April 21, 2015. Trumka told the body's executive council that they wouldn't be holding a vote right away on who to endorse for president. , EVAN VUCCI/ASSOCIATED PRESS

The biggest prize in labor endorsements won't be doled out next week as many people expected, according to an email from the president of the AFL-CIO labor federation obtained by The Huffington Post.

In his email, Richard Trumka told members of the AFL-CIO executive council that the body won't be holding a vote on whether to endorse Democratic presidential candidates Hillary Clinton or Bernie Sanders at its annual winter meeting in San Diego.

"Following recent discussion at the AFL-CIO’s Executive Committee meeting and subsequent conversations with many of you, I have concluded that there is broad consensus for the AFL-CIO to remain neutral in the presidential primaries for the time being and refrain from endorsing any candidate at this moment," Trumka said.

The decision is a coup for Sanders' backers within organized labor. Clinton has managed to lock down endorsements from unions representing a majority of unionized workers in this country. But the AFL-CIO endorsement is the most potent of all, and it won't be going to Clinton -- at least, not yet.

"We're extremely happy" about the decision, said RoseAnn DeMoro, executive director of National Nurses United, a union that has broken away from many other labor groups and endorsed Sanders.

In his email to members, Trumka said the council would "continue its ongoing discussion" about the 2016 campaign.

"[W]e encourage affiliated unions to pursue their own deliberations with their members and come to their own endorsement decisions, if any, through open and rigorous debate," he said.

Dave Jamieson is the Huffington Post’s labor reporter. Before joining the D.C. bureau, Jamieson reported on transportation issues for local Washington news site TBD.com and covered criminal justice for Washington City Paper. He’s the author of a non-fiction book, Mint Condition: How Baseball Cards Became an American Obsession, and his stories have appeared in Slate, The New Republic, The Washington Post, and Outside. He’s won the Livingston Award for Young Journalists and the Hillman Foundation’s Sidney Award.