The drivers want the city's Taxi and Limousine Commission to hold a union vote. 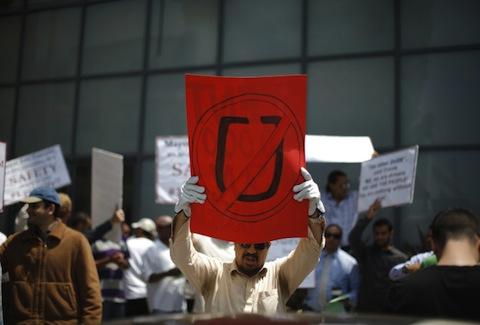 Nearly 14,000 Uber and Lyft drivers in New York have signed up to join the local branch of the Amalgamated Transit Union, according to a union spokesperson. The group plans to rally at the NYC Taxi and Limousine Commission (TLC) headquarters next week to demand a formal vote on unionizing.

The 14,000 sign-ups exceed the 30 percent threshold that federal regulators say must trigger an official vote, the union says. The cards signed by drivers indicate that they seek ATU membership and authorize the union to act as their collective bargaining agent.

In May, Uber struck a deal with the International Association of Machinists and the independent Freelancers Union to form a new Independent Drivers Guild that would represent their workers. While not an official union, the Guild is open to the 35,000 drivers Uber says it employs in New York.

Uber maintains its drivers are independent contractors, not employees, and therefore do not have the right to unionize, although recent legislation in Seattle affirmed their right to do so.

The ATU’s Local 1181-1061 branch is the largest chapter of the ATU, representing more than 14,000 transit workers including drivers and mechanics throughout New York City, Westchester, and Long Island. The 190,000-member Amalgamated Transit Union represents city and school bus drivers, subway and ferry operators, mechanics and maintenance workers, among others in the U.S. and Canada.

Drivers will rally at the TLC headquarters in Long Island City on Tuesday, September 27, at 11AM.

As a condition of the agreement to form the Independent Drivers Guild, the Machinists union promised not to try to formally unionize Uber drivers for five years. However, if the drivers are found to be employees at any time (including within the period of the five year agreement), the drivers can unionize with the machinists. This could happen as a result of a court, regulatory or legislative decision. The Machinists Union also has a history of successfully organizing and unionizing black car drivers in New York City in the last twenty years.

The agreement with Uber and the Freelancers Union is separate from the one they have with the Machinists, even though they were announced at the same time.