“This is not just any opposition party: It is one with Nazi sympathies,” a former state department official said. 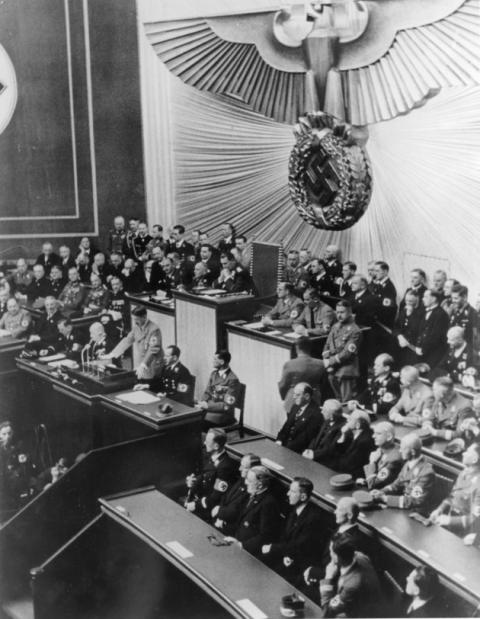 Hitler addresses the Reichstag in Berlin in 1938. Anton Reinthaller is in the first row, fifth from left, according to a caption provided by Getty., ULLSTEIN BILD VIA GETTY IMAGES

[See this article for an analysis of the recent Austrian election in which the Freedom Party placed a close second. -- moderator]

The head of Austria’s anti-immigrant Freedom Party, which was founded after World War II by former Nazis, claimed in a Facebook post this week that he met with Retired Lt. Gen. Mike Flynn, Donald Trump’s pick to serve as his national security adviser.

The alleged meeting between Flynn and Heinz-Christian Strache, which was first reported by The New York Times, took place several weeks ago, according to Strache. In his posting about it, Strache also announced signing a “cooperation pact” with Russian President Vladimir Putin.

A Trump spokeswoman didn’t respond to a request for comment, but an anonymous transition team official told CNN the meeting didn’t happen. The Austrian embassy declined to comment.

Although the Times story focused on the Russia pact, the alleged Flynn-Strache meeting would be at least as significant. Austrians’ support for far-right parties has increased significantly over the past 15 years. Strache’s Freedom Party received 35 percent of the vote in the first round of the race for Austria’s ceremonial presidency, before narrowly losing a runoff earlier this month.

“This is not just any opposition party: It is one with Nazi sympathies,” said Daniel Serwer, a former state department official who’s now a professor at the School of Advanced International Studies at Johns Hopkins University. “Nor is Flynn any national security adviser. He is a documented conspiracy propagator. His long-term strategy colleague, Steve Bannon, is an ethnic nationalist and anti-Semite. The president-elect is an anti-Muslim and anti-immigration bigot.”

There’s no doubt that Strache, who worries about “inverse racism, “Austrian youths” being “beaten up in discos” and the “risk of Islamization,” has a lot in common with Flynn, who has also warned of the dangers of Islam and called the religion a “cancer,” and Trump, who called for banning all Muslims from visiting the U.S.

Although they’re proud of their positions on immigration and Islam, Strache and Flynn have denied that they’re anti-Semitic.

The Freedom Party’s first leader was Anton Reinthaller, who supported the Nazi party as early as 1928 and later served as a Nazi government official. Reinthaller was a member of the SS, the Nazi paramilitary organization-turned-secret police that executed much of the Holocaust. Although there’s no clear evidence that Reinthaller was directly involved in the shooting, gassing and torture of millions of Jews, Roma, communists, gay people and others, he served in the government that carried it out and did nothing to stop it.

“Readers have a hard time distinguishing between ex-Nazis and neo-Nazis,” warned Swanee Hunt, a former U.S. ambassador to Austria who’s now a lecturer at Harvard’s John F. Kennedy School of Government. In Austria, “there was always this struggle with how do you deal with people who were Nazis,” she said. “Austria had lots and lots of people who were Nazis and sympathizers. It’s not like they just disappear into thin air.”

When Hunt served in Austria in the 1990s, the Freedom Party “had that strain that’s echoed here more in the alt-right,” she said, referring to white nationalist Richard Spencer’s term for American white nationalism and its associated movements. “It’s building on this anti-foreigner and anti-Muslim sentiment that you see, frankly, all over.”

But sometimes, the past shines through.

In 2012, Austria’s then-president canceled plans to give Strache an award after the Freedom Party leader was overheard claiming that he and his allies were the “new Jews” and that the fearsome heckling they received on their way into a gala at Vienna’s Hofburg Palace was “like Kristallnacht,” the night in 1938 when Austrian and German civilians, with the aid of Nazi paramilitaries, murdered Jews, destroyed Jewish-owned stores, burned hundreds of synagogues and sent tens of thousands of Jews to concentration camps to die.

“Strache mocked the victims of the Holocaust by comparing himself and his fellow extremists to Jews and invoking Kristallnacht to complain about the anti-fascist protests,” Abraham H. Foxman, the national director of the Anti-Defamation League and a Holocaust survivor, said at the time. “This trivialization is outrageous, but not surprising from Strache and his ilk.”

Trump used anti-Semitic tropes and received support from anti-Semites during his campaign for president. In July, Flynn retweeted and endorsed an anti-Semitic tweet, but later claimed it was a mistake.

“At risk of appearing to be a conspiracy theorist myself, I think we are seeing an effort to build an international coalition of like-minded anti-Muslim, anti-immigration ethnic nationalists who can be depended upon to undermine the liberal democratic order of the West, in particular its international norms regarding peace and security, its trade and investment rules, and its human rights standards,” Serwer said. “Candidates for inclusion in this coalition include President Putin, Prime Minister Netanyahu, President Sisi, Marine Le Pen and Germany’s Alternative fur Deutschland. I’m sure more will appear on the horizon.”