Faced with the Mexican government’s refusal to pay for the building of a wall between the U.S. and Mexico, the Trump Administration announced it would impose a 20% tax on Mexican imports. But the very idea of a wall is imbued with aggression from the highest office of the U.S. government to the Mexican state. It is “a hostile act.” On Friday Mexican President Enrique Peña Nieto called an emergency government meeting to coordinate a response to Trump’s attack on Mexico. 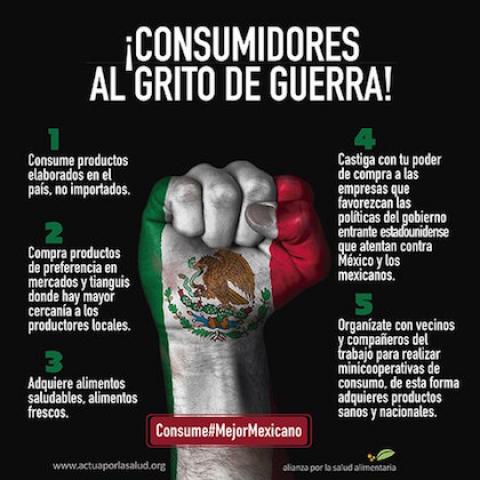 The Mexican Healthy Food Alliance, borrowing a phrase from the Mexican national anthem, urges Mexicans respond “to the Cry of War” and “use your buying power to punish the companies that favor the politics of the new U.S. government.”, Alianza Por La Salud Alimentaria (Alliance for Healthy Food)

LESS THAN ONE week into his presidency, Donald Trump has taken the first steps in making his vision of a massive barrier between the U.S. and Mexico a reality, signing an executive order Wednesday afternoon calling for the “immediate” construction of a sprawling border wall to separate the two nations.

Though the move is likely to appeal to his core supporters north of the border, one place where Trump’s efforts are not playing well is Mexico, despite the president’s dubious assertion Wednesday afternoon that “our relationship with Mexico is going to get better.”

By Thursday morning, less than 24 hours after his order was signed, Trump’s dubious optimism suffered a public blow when Mexican President Enrique Peña Nieto announced that he would not be attending a meeting in Washington, D.C., scheduled for next Tuesday.

Peña Nieto’s decision followed escalating tensions between his government and the newly empowered Trump administration that appear to have reached a critical point following Wednesday’s signing.

Throughout his campaign, Trump insisted the Mexican government could be forced into paying for the wall, which would likely cost billions of dollars. He has walked that back in recent weeks, asserting instead that Mexico would reimburse the U.S. for the project.

“We’ll be reimbursed at a later date from whatever transaction we make from Mexico,” Tump said in an interview with ABC News Wednesday. “I’m just telling you there will be a payment. It will be in a form, perhaps a complicated form.”

Peña Nieto has repeatedly denied Trump’s assertion. In a televised statement Wednesday night, the Mexican leader fired back at his counterpart in the White House. “I have said it over and over again: Mexico will not pay for any wall,” he said.

Responding to the Mexican president through his preferred medium of public communication, Trump tweeted Wednesday night that the meeting might be cancelled if Mexico refuses to pay for the wall. Peña Nieto beat Trump to the punch, however, saying in a tweet of his own the following morning that the Mexican government had informed the White House that he would not be attending the meeting.

“It is becoming a huge political issue,” Alejandro Hope, a national security expert and former intelligence analyst in Mexico City, told The Intercept.

Hope argued that even if a wall could be completed, it would do little to achieve its stated objectives, including stemming the flow of drugs north to the U.S. “Let me put it this way, all the heroin consumed in the U.S. in a year would fit into 2,000 pieces of luggage,” he said. “The notion that you stop that with a wall is truly nonsensical.”

The wall also sends a harsh diplomatic message that could have far-reaching impacts: It could push Mexico closer to governments the U.S. considers hostile or prompt Mexican agencies to withdraw from joint drug-war operations. Regardless of its intents, Hope argued, the very idea of the wall is imbued with aggression from the highest office of the U.S. government to the Mexican state.

A core feature of Trump’s ascendance to the White House, the wall was first among a collection of hardline, anti-immigrant policies the new administration had long promised and has now begun rolling out. The executive order calling for its construction also empowers state and local law enforcement “across the country to perform the functions of an immigration officer in the interior of the United States to the maximum extent permitted by law” and calls for a build-up of detention facilities along the southern border.

“We’re in the middle of a crisis on our southern border,” Trump told an audience this week at the Department of Homeland Security’s headquarters.

The Federation for American Immigration Reform, an organization that the Southern Poverty Law Center considers a hate group, cheered the president’s order as a step in the right direction, saying in a statement that the wall “will go a long way in making effective border control a reality.” (The federation’s longtime executive director, Julie Kirchner, was this week named chief of staff at U.S. Customs and Border Protection.)

“This wall would say that those from outside the United States, especially from Latin America, are to be feared and shunned — and that is just wrong,” Margaret Huang, executive director of Amnesty International USA, said in a statement. “We will fight this dangerous move with everything we’ve got.” Omar Jadwat, director of the American Civil Liberties Union’s Immigrants’ Rights Project, added, “President Trump’s fantasy of sealing the border with a wall is driven by racial and ethnic bias that disgraces America’s proud tradition of protecting vulnerable migrants.”

Border security experts have long pointed out that a wall alone would not solve the problems of immigration and crime that Trump so often describes. Indeed, Trump’s own director of DHS, the retired Gen. John Kelly, said as much in his Senate confirmation hearing.

“Wasting billions of taxpayer dollars on a border wall Mexico will never pay for, and punishing cities that do not want their local police forces forced to serve as President Trump’s deportation dragnet, does nothing to fix our immigration system or keep Americans safe,” said California Rep. Nancy Pelosi. The criticism was not limited to Democrats. Texas Republican Rep. Will Hurd, a former clandestine CIA officer whose district includes some 800 miles of border territory, said the wall would accomplish little. “The facts have not changed,” Hurd said in statement. “Building a wall is the most expensive and least effective way to secure the border.”

“The impact is more symbolic than anything,” Adam Isacson, a senior associate for defense oversight at the Washington Office on Latin America told The Intercept.

Isacson pointed out that Bush administration efforts at erecting some 700 miles of border fencing only managed to meet roughly half of their objective — the areas lacking fencing include remote terrain where such construction is difficult.

“He’s more interested in the display, the spectacle, the impact that it will make, rather than what will practically work,” Isacson said. “And yeah, it will play well in Kansas.”