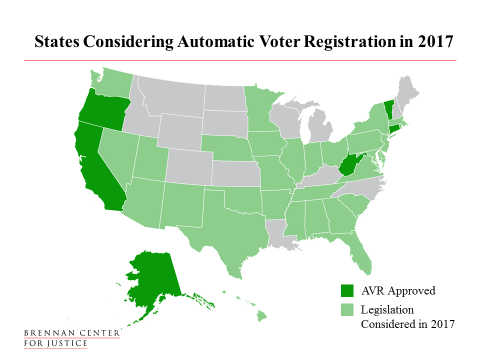 In early 2016, Oregon was the first state to implement a system in which eligible residents are automatically registered to vote when they have any significant interaction with the motor vehicles department. People have to opt out if they don’t want to register.

The Alliance for Youth Action is an advocacy group that supports automatic voter registration generally and Oregon’s law specifically.

The specific increases in turnout among youth and registration among people of color in Oregon were the biggest among the 40 states that make their data publicly available, the report says. The increases in youth registration outpaced Oregon’s population growth in that demographic.

Sarah Audelo, executive director of the Alliance for Youth Action, noted that the campaign to pass Oregon’s law in 2015 was led by young organizers and said even her group was surprised by the size of the increases in turnout and registration.

“Access to the ballot matters. As a country we should be taking a hard look at ourselves to see what are we doing to make sure that our people are able to vote, that they’re able to participate in our democracy,” Audelo told HuffPost. “We absolutely are fighting back hard against efforts to restrict access to the ballot, but oh my gosh, look what happens when we make it easier for people to participate.”

“Oregon shows us that AVR [automatic voter registration] can be the great equalizer ― and help build a robust electorate that mirrors this country’s make-up,” said Allegra Chapman, director of voting and elections at Common Cause. “The state already had one of the highest turnout rates in the country, and now it’s building an ever stronger voter base. This is definitely the direction in which the country needs to go: amplifying all eligible voices to create a democracy that accounts for all.”

Lawmakers in California, Vermont, West Virginia and the District of Columbia have also all enacted automatic voter registration. Colorado and Connecticut did it administratively. And Alaska voters approved a slightly different version through a ballot measure this past November.

Despite signs of success in Oregon soon after the election, Republican governors in a number of states have blocked attempts to pass automatic voter registration. They often cite concerns about voter fraud, although several studies and investigations have shown it is not a widespread problem in the United States. Over the last two years, automatic voter registration bills have been introduced in nearly 30 states.