The Case for President Pence

For progressives who think impeachment would ultimately be a win for Republicans: Think again. 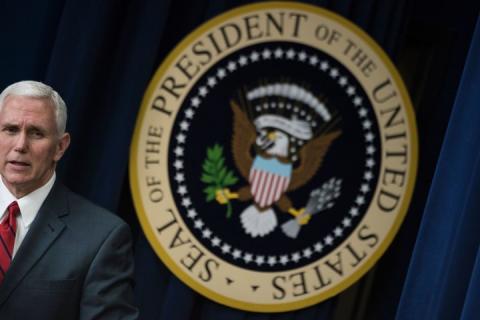 In raising the issue of President Trump’s removal from office, either through impeachment or finding of impairment via the 25th Amendment, I keep hearing otherwise sensible people say, “But then we’ll just get President Pence, and the Republicans will have time to regroup and recover.”

For starters, Donald Trump is a unique menace to American democracy and to planet Earth. Getting him out of office should be the top priority — the sooner, the better.

Secondly, in purely partisan terms, replacing Trump with Pence would be far from a romp for Republicans. Pence is no Trump. He lacks Trump’s feral charisma, his weird genius as an entertainer, and the image of being a champion of aggrieved heartland forgotten voters.

Pence was a fairly ordinary religious conservative Republican. He was an extremely clumsy governor of Indiana, facing a defeat for re-election. Indeed, he was one of the few Republican politicians even willing to consider being Trump’s running mate, mainly because he had few other options if he wanted to stay in politics.

Most importantly, if Trump is forced out of office, it will split the Republican base. The white nationalist, don’t-bother-me-with-facts hard core, for whom Trump can do no wrong, will be livid. The Republicans will have a very tough time rallying their troops for 2018, while Democrats will be on the march.

So, yes, on all counts, Pence is preferable to Trump. Nixon’s successor, Gerry Ford, a very nice and well-liked politician, could not manage to win re-election in 1976 against an unknown peanut farmer, one Jimmy Carter.

Ford’s decision to pardon Nixon was part of the story, but not the only part. (And Pence would be under substantial pressure to pardon Trump.) There was a landslide swing to Democrats in the 1976 congressional elections because the Republicans were disgraced and dispirited after Nixon.

Now, from the point of view of Senate Leader Mitch McConnell and House Speaker Paul Ryan, Pence may still be preferable to Trump — because Trump is becoming more of an embarrassment by the day. The Republican outlook for 2018 might be even worse if Trump stays in the White House. But, given the larger stakes, that’s no reason for Democrats to want to keep Trump.

Oh, and there is one complication. What did Pence know, and when did he know it?

Unlike, Gerald Ford, who was a Republican insider but a complete outsider to the Nixon White House, Pence may not have entirely clean hands.

As head of Trump’s transition team, Pence evidently knew plenty about Michael Flynn, and he may well have known a lot more. Though Pence does not have to answer to Trump’s other grave misdeeds, such as firing the FBI director after he refused to go easy on Flynn or personally profiting from office, Pence could well get swept up in special counsel Robert Mueller’s investigation.

It would be truly bizarre, unprecedented, and constitutionally tricky to remove the president and vice-president simultaneously. Something like this nearly happened in the Watergate affair, when an entirely separate investigation revealed that Nixon’s V.P. Spiro T. Agnew, had extorted bribes and not reported them on his taxes while serving as Baltimore County Executive years earlier. (Nixon sure had a gift for picking talent.)

Agnew was allowed to plead guilty to one criminal count, on condition that he resign the vice-presidency. That was in October 1973, only ten months before Nixon was forced out. Imagine if Agnew had succeeded Nixon.

So, weirdly, we should be hoping that Pence is tarnished enough to be an embarrassment, but not so tarnished that he, too, has to leave office.

Robert Kuttner is co-editor of The American Prospect and professor at Brandeis University’s Heller School. His latest book is Debtors’ Prison: The Politics of Austerity Versus Possibility.