Socialist Forced Off Democratic Campaign for Criticism of Israel

Chicago Alderman Carlos Ramirez-Rosa, a young populist politician who is a member of the Democratic Socialists of America, has been forced off a gubernatorial ticket that he only recently joined, after coming under fire for his ties to DSA and the group’s support of the Boycott, Sanctions, and Divestment movement. 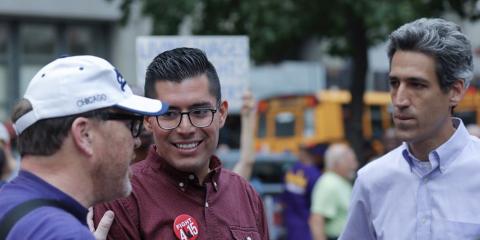 Illinois state senator and candidate for governor Daniel Biss, right, and former running mate Carlos Ramirez-Rosa speak with a participant of the Fight for 15 Labor Day march., Biss for Governor

Chicago Alderman Carlos Ramirez-Rosa, a young populist politician who is a member of the Democratic Socialists of America, has been forced off a gubernatorial ticket that he only recently joined, after coming under fire for his ties to DSA and the group’s support of the Boycott, Sanctions, and Divestment movement.

Ramirez-Rosa joined Democratic state senator Daniel Biss’s gubernatorial ticket in late August — setting up Biss’s campaign as the unapologetic left edge of a Democratic primary in a field that includes a billionaire and a member of the Kennedy family.

Ramirez-Rosa came under fire this week from a prominent member of his state party, but not for his support of democratic socialism.

Illinois Democratic Rep. Brad Schneider penned a Facebook post on September 3 citing the alderman’s views on Israel and particularly his “affiliation with a group that is an outspoken supporter of the Boycott, Divestment, and Sanctions movement against Israel” — namely, DSA — as a cause for concern. He wrote that he had spoken to both Biss and Ramirez-Rosa and decided to withdraw his endorsement of the campaign.

Ramirez-Rosa’s statements on the Israeli-Palestinian conflict have been critical of the status quo but hardly extreme. “You know, for too long the U.S. government has subsidized the oppression of the Palestinian people, and it’s time that that’s stopped,” he told the Real News Network during an interview in June 2016.  “And we have seen a shift internationally in favor of justice for the Palestinian people. You know, people stand with Israel, but they also want to make sure that Palestinian people have [justice].”

On Wednesday evening, Ramirez-Rosa posted news of his departure from the ticket on Facebook:

While I was honored to be chosen as Senator Daniel Biss’ gubernatorial running mate, it became clear over the past few days that while we share a total commitment to peace, security, and statehood for the Israeli and Palestinian people, and both oppose pursuing BDS at the state level, the difference of opinion we have on the role the BDS movement plays at the federal level would make it impossible to continue moving forward as a ticket.

I was asked to join the ticket to even more strongly advocate for the critical issues facing this state, such as Medicare for all, a $15 living wage today, affordable childcare, and free college tuition. While I am no longer part of the ticket, I have every confidence that Senator Biss and I, in our different roles, will continue to be strong advocates for these progressive issues.

I especially want to thank the members and organizational leaders of Reclaim Chicago, Our Revolution IL, and Democratic Socialists of America, and the thousands of activists who have shown their commitment to addressing these critical concerns for their confidence in me, and their continued work on these progressive issues. There is so much work to be done, and I am proud to stand by your side while we continue to build our progressive movement.

Biss also put out a lengthy statement explaining his decision, suggesting that Ramirez-Rosa had not been upfront about his support of BDS when Biss interviewed him for the job of running mate. According to Biss:

Carlos Ramirez-Rosa and I have reached a difficult decision about our ticket. As of today, I’ll be moving forward with a new running mate.

Growing up with an Israeli mother, grandparents who survived the Holocaust, and great-grandparents who did not survive, issues related to the safety and security of the Jewish people are deeply personal to me.

That’s why I oppose the Boycott, Divestment, and Sanctions movement, or BDS, as I believe it moves us further away from a peaceful solution.

When I asked him in the interview process prior to his selection, Carlos said he too supported a two-state solution and opposed BDS.

Since we’ve announced his selection, we have been asked about his position on BDS. After much discussion, it’s become clear that Carlos’ position has changed. While I respect his right to come to his own conclusions on the issue, it simply wasn’t the understanding we shared when I asked him to join the ticket.

In light of this, we have agreed that I will be moving forward with a new running mate. It was not an easy decision, but it was the right decision.

Schneider, meanwhile, has long been affiliated with the right-wing, pro-Israel lobby, which tolerates little dissent on the issue.

“If you look at [Schneider’s] record, he was just an Israel guy, that was his thing,” MoveOn strategist Daniel Mintz told The Huffington Post in 2012, after the then-businessman won the Democratic primary.

Steve Sheffey, the former president of CityPAC, a Chicago-based, pro-Israel political action committee, used a 2016 op-ed  in The Hill to sing Schneider’s praises. “Schneider is a lifetime member of AIPAC (the American Israel Public Affairs Committee), He has long been active in the Jewish and pro-Israel communities,” he wrote. “Schneider visited Israel over a dozen times before running for Congress and worked for several months on a kibbutz.”

When asked about Israel issues in a 2012 Chicago Magazine interview, Schneider replied, “I’ve been to Israel more times than I could actually count.” Although he eventually came to terms with it, he was one of the most outspoken Democrats initially opposing the nuclear deal with Iran. In an op-ed published on the Times of Israel website, he denounced the agreement. “My personal stake in this debate is further influenced by the terrifying youthful memory of Yom Kippur in 1973, when Israel faced a surprise attack from Egypt, and the Jewish state’s very existence was threatened,” he wrote.

During the 2014 war between Gaza and Israel, Schneider attended a rally offering little nuance on the issue. “We are here as one people to say in a strong clear voice, the United States has no better ally in the region, in fact no better ally in the world than the democratic, Jewish state of Israel,” he told a crowd in Chicago. “In a strong, clear voice Israel has the right, Israel has a responsibility to defend herself against the terrorist rockets, the terrorist tunnels, and the evil that is Hamas.” He then repeated the same line he gave to Chicago Magazine, telling the cheering crowd that he has been to Israel more times than he can count.

He is also a co-sponsor of a House bill that would criminalize support for BDS.

Schneider’s office did not respond to a request for comment.

This story was updated to include a statement from Biss.

Zaid Jilani is a journalist who hails from Atlanta, Georgia. He has previously worked as a reporter-blogger for ThinkProgress, United Republic, the Progressive Change Campaign Committee, and Alternet.  He graduated from the University of Georgia in 2009 with a Bachelor of Arts in international affairs and received his master’s in public administration from Syracuse University in 2014.

The Intercept depends on the support of readers like you to help keep our nonprofit newsroom strong and independent. Join The Intercept