This is a back-door attempt to establish personhood from the moment of conception. 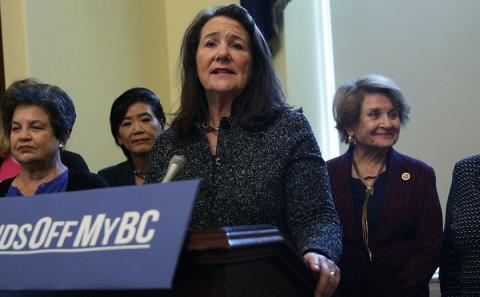 “The tax code is no place to define what constitutes an ‘unborn child.’ What’s next, giving a Social Security number to a zygote?” , Alex Wong via Getty Images

Republicans slipped anti-abortion language into the draft of the tax reform bill they released on Thursday. The move is part of an effort by the Trump administration and House Republicans to define life as beginning at conception, with an eye to rolling back Roe v. Wade.

Buried on page 93 of the 429-page tax proposal is a provision that would allow fetuses to be named as beneficiaries of college savings accounts known as 529 plans ― investment vehicles that come with a range of tax breaks.

Abortion rights advocates were quick to call out the language. “This is a back-door attempt to establish personhood from the moment of conception,” Rep. Diana DeGette (D-Colo.), co-chair of the Congressional Pro-Choice Caucus, said in a statement. “The tax code is no place to define what constitutes an ‘unborn child.’ What’s next, giving a Social Security number to a zygote?”

Ostensibly, the idea is that parents can get a leg up on saving for their kid’s education before he or she is even born. However, it takes care to define the terms “unborn child” and “child in utero,” in what appears to be a naked attempt to establish so-called personhood for fetuses, a popular anti-abortion tactic.

Abortion foes believe that if fetuses were legally considered people, then abortion would have to be outlawed. State and federal legislation attempting to classify fertilized eggs, human embryos and fetuses as people has failed repeatedly over the years. The tax reform provision appears to be a sideways attempt at something similar.

“A child in the womb is just as human as you or I yet, until now, the U.S. tax code has failed to acknowledge the unborn child,” Jeanne Mancini, president of the anti-abortion group March for Life, told Politico.

There’s nothing in current law stopping parents from opening a 529 savings account before a child is born, explained Greg McBride, chief financial analyst at Bankrate.com, a personal finance site. A parent opens the account in his or her own name, and once the baby is born, changes the account beneficiary, he explained. McBride said he did this for one of his sons.

“I don’t know how this makes it different,” he said. McBride said at most, the tax reform provision would allow parents to skip the step of naming a new beneficiary. “Taking a nonstop flight instead of changing planes,” he said.

It’s unclear how the anti-abortion language got into the tax bill. Another anti-abortion group, however, thanked Rep. Mark Meadows (R-N.C.) “for his leadership on this important effort.”

The GOP tax reform plan is still in its early stages, and it’s unclear if the anti-abortion provision will survive. Two tax policy groups ― one conservative, one progressive ― declined to speak on the topic with HuffPost.

Parents use the widely popular 529 accounts to sock away money for their kids’ education expenses. The accounts come with a few tax breaks: You pay no tax on interest earned. And, if you use the money for education expenses, you don’t pay taxes when you withdraw the money, either. In some states, you also get a tax deduction for contributing money to a 529 account.

So-called personhood language also made an appearance in a draft strategic plan for the Department of Health and Human Services released last month. In a note about the department’s organizational structure, HHS said its mission was to protect “Americans at every stage of life, beginning at conception.”

And earlier this week, the House held a hearing on a bill that would ban abortions after six weeks of pregnancy. The ban doesn’t have a chance of passing, HuffPost’s Laura Bassett reported on Tuesday.

The draft tax bill also offers a tax break to another of the  GOP’s favorite kind of people: corporations. The proposal would reduce the corporate tax rate to 20 percent from 35 percent.

Actual human children and adults fare less well. The proposal gets rid of an adoption tax credit and ends popular tax deductions on medical spending and student loan interest. Although, perhaps if fetuses can save for college, kids of the future will rack up less in school debt.

Emily Peck is a Senior Reporter with HuffPost