The White House has been trying to shut women up this whole time. 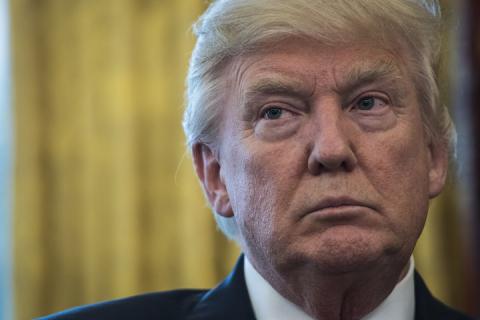 To the droves of women speaking up about sexual harassment and discrimination, the Trump administration’s message is clear: Shut up.

Behind the scenes, and mostly through executive orders, the White House is making it harder for women to report sexual harassment and fight sex discrimination.

The clearest example came in March. It received little coverage at the time. President Donald Trump reversed an Obama-era order that forbid federal contractors from keeping secret sexual harassment and discrimination cases. The 2014 rule prohibited these companies, which employ about 26 million people, from forcing workers to resolve complaints through arbitration, an increasingly common method businesses use to settle disputes out of the public eye.

And it’s only a small piece of the picture. “The Trump administration has a clear anti-women agenda,” Stender said. “I say that with complete certainty. This is an all-out, full frontal attack on women.”

The attack so far has seen the most success via executive order, but a vast swath of the public policies proposed or endorsed by administration officials attempt to scale back women’s rights. From Trump’s repeal of executive orders meant to reduce pay discrimination to the budget floated in May, the failed repeal of Obamacare, and now the Republican tax bills, actions taken or backed by this administration harm women.

“The Trump administration has a clear anti-women agenda. I say that with complete certainty. This is an all-out, full frontal attack on women.” Jessica Stender, senior staff attorney and Equal Rights Advocates, a women’s rights nonprofit.

This war on women comes at a time when feminist ideals have never seemed more powerful. Finally, sexual assault victims are being heard and believed. Sexual predators like Hollywood mogul Harvey Weinstein are facing real consequences, losing their jobs, their movie deals, their companies. And, though it’s hard to believe now, the U.S. just last year came extremely close to electing its first female president.

In this atmosphere, the Trump administration’s actions look remarkably like a real-time backlash to the growing assertion of female power. The assault on women began almost instantly after the primal female scream that was the women’s march in January. 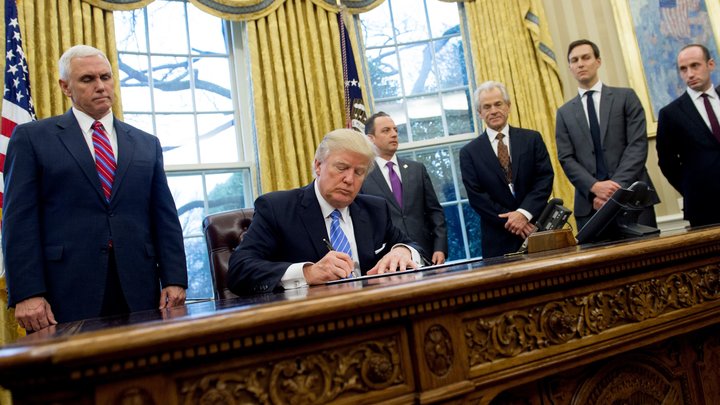 That month, Trump signed his first executive order (surrounded by men). Literally a “gag rule,” meant to prevent health clinics around the world from even talking about abortion.

He was just warming up his pen. After the order on arbitration came in March, the administration in August ditched an innovative equal pay initiative launched by the Equal Employment Opportunity Commission. Currently, women on average make just 80 percent of what men earn. And women of color face even wider pay gaps.

The scrapped provision would’ve required companies to report data on how much they pay workers ― broken down by race and ethnicity ― in order to make it easier to figure out the scope of the pay gap and ideally help close it.

The EEOC spent six years devising this rule. The agency worked with the National Academy of Sciences to set-up a study on the pay gap, and revised and tweaked its proposal after consulting with employers and opening it up to public comment.

The Office of Management and Budget scrapped the rule with little explanation, beyond saying it would create too much paperwork and impose too much of a burden on corporations. It would’ve cost each company $416.58 to comply, according to an EEOC estimate.

“We think it’s outrageous,” said Robin Thurston, the lead litigator in a lawsuit filed by the National Women’s Law Center and the Labor Council for Latin American Advancement that seeks to overturn the decision. The data collection would have had benefits that far outstripped these costs, she said, enabling the EEOC to better enforce civil rights law and find companies with noticeable pay gaps.

The agency hasn’t yet responded to the suit.

Keeping information on pay discrimination out of the public’s eye is, of course,  another way to silence women ― and it’s quite effective. Without pay transparency, women and people of color have no way of knowing if they’re paid unfairly and the practice can linger.

If women do figure out they’re underpaid, their complaint could wind up in private arbitration. Colleagues facing similar situations won’t know anything. Nothing changes. 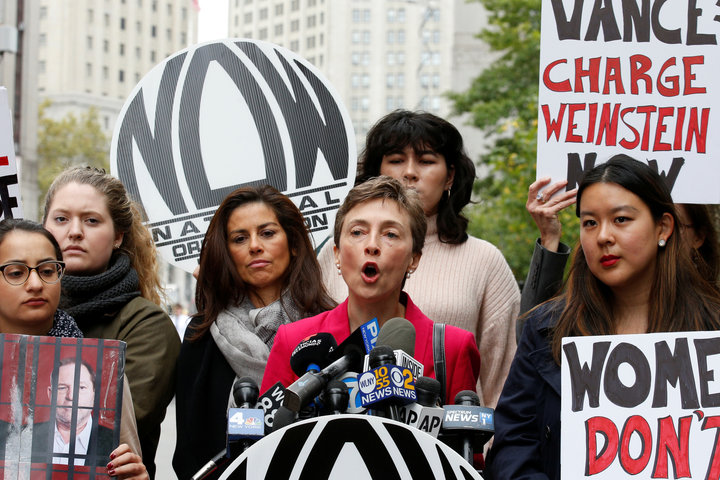 Members of the National Organization for Women hold a rally to call upon Manhattan District Attorney Cyrus Vance Jr. to reopen a criminal investigation against Harvey Weinstein.

But the administration wasn’t done trying to silence women. In September, Secretary of Education Betsy DeVos rescinded a key Obama-era effort meant to help victims of sexual harassment and assault on college campuses: A 2011 letter sent by the administration to colleges defining sexual assault and setting a new standard for how schools should respond to such accusations.

Trump, himself accused of sexual misconduct or sexually assaulting at least 13 women, has been largely silent on the recent outpouring of stories of such abuse by well-known and powerful men. One exception: Trump used Twitter to mock Sen. Al Franken after misconduct allegations surfaced against the Minnesota Democrat.

On Tuesday, Trump publicly defended Republican Roy Moore, the 70-year-old  Senate candidate in Alabama who has been accused of preying on underage girls as a younger man. “He says it didn’t happen. You have to listen to him also,” the president told reporters.

Of course, part of his reticence to acknowledge the veracity of these women’s claims may be that it would undercut Trump’s repeated insistence that all the women who accuse him of sexual predation are simply liars.

Also on Tuesday, Trump was asked for his message to women during this “pivotal moment.”

His answer is totally empty of meaning. “These words mean nothing. They are a yearbook signature,” writes Alexandra Petri in the Washington Post. And his statement is completely belied by his actions.

Women aren’t standing for it. This moment, where more and more women are coming forward to expose sexual abuse, feels like just a beginning.

“It almost seems like this outpouring is a backlash against Trump,” Stender said. “It’s heartening.”