Bernie Sanders’ ‘Medicare For All’ 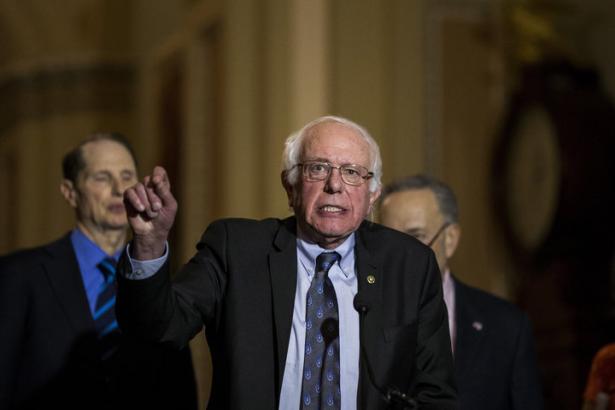 Sen. Bernie Sanders (I-Vt.) relished making his case that the United States should follow other countries that treat health care as a right. ,Bloomberg/Getty Images

Sen. Bernie Sanders’ televised town hall on Tuesday night to promote single-payer health care, or “Medicare for all,” drew a live audience of about 1.1 million people ― all but a few hundred of whom viewed the event online.

For Sanders, whose single-payer health care legislation elicited the support of over one-third of the Senate Democratic Caucus, the 90-minute broadcast at the U.S. Capitol visitors center was an opportunity to promote a top policy priority while thumbing his nose at the “corporate media.”

The Vermont senator is a frequent critic of mainstream news outlets for their alleged focus on superficial political matters and failure to entertain narratives that threaten their corporate owners. Although Sanders has participated in more than one live health care debate on CNN, he told The Washington Post earlier this month that a large media network failed to respond to his inquiries about a broadcast solely on the topic of government-provided health care coverage.

But Sanders’ town hall, which was co-hosted by the left-leaning online video news outlets The Young Turks, NowThis and ATTN, demonstrated that a lengthy seminar on the complicated topic of single-payer health care can draw a crowd as large as many primetime cable news shows.

The auditorium itself was packed to capacity with some 450 attendees. And together, the live audiences on the senator’s Facebook and YouTube pages, the the three news sites and some other outlets that picked up the stream added up to about 1.1 million people.

The event consisted of three expert panel discussions moderated by Sanders: the first discussing problems with the current American health care system; the second on the potential economic impact of a “Medicare for all” program; and the third comparing the American health care system with those in other countries. Each of the three segments also featured questions from the live audience and video queries submitted online.

Since revealing his new single-payer bill in September, Sanders has doggedly promoted it. In October, he even toured top-flight health care facilities in Toronto to showcase the achievements of the single-payer system in Canada.

Some of Sanders’ guests on Tuesday, including Richard Masters, the pro-single payer CEO of MCS, a Pennsylvania-based picture frame maker, and Dr. Claudia Fegan, chief medical officer for the Cook County Health and Hospital System in Chicago, were veterans of his legislative rollout and his Canada trip, respectively.

Other guests were new ― like Dr. Donald Berwick, a Harvard medical school professor who led the Centers for Medicare and Medicaid Services in the Obama administration ― reflecting the steady progress of Sanders’ cause into the mainstream. As one of the Democratic Party’s premier health policy experts and technocrats, Berwick’s imprimatur is a major asset.

You can stand up for people. Why wouldn’t we do that for all Americans, not just people over 65? Dr. Don Berwick, Harvard

When Sanders asked whether there was any good reason not to expand Medicare, Berwick replied, “No, there’s no reason. It’s just will.”

Berwick described how Medicare’s public mission and centralized bargaining power, as the insurer for some 55 million Americans, allowed him to easily troubleshoot problems like the over-sedation of nursing home patients.

“You can stand up for people,” Berwick recalled of his position at Medicare’s helm. “Why wouldn’t we do that for all Americans, not just people over 65?”

Sanders relished the opportunity to tee panelists up with knowing questions that knocked down conservative straw man arguments against single-payer health care.

The exercise was likely most useful for hardened single-payer advocates looking for a pep rally and for center-left Americans concerned about health care affordability who haven’t settled on a policy framework to explain the system’s problems. It is less predictable how Sanders’ pitch would fare with more skeptical health care consumers.

As Sanders is fond of noting, polling shows that a majority of Americans support single-payer health care.

But nearly half of Americans get health coverage from an employer, and they’d be forced to give up what they have and pay higher taxes for an expanded version of Medicare that might not produce promised cost savings overnight. The passage of the Affordable Care Act provoked hysteria through its cancellation of some 400,000 individuals’ health care plans; there is no telling how people would react to a forced transition of much greater proportions.

But Sanders, who has been campaigning for single-payer health care since he first entered Congress in 1991, is betting that the movement is finally accelerating. What makes the current moment different, he argued, is that the same digital revolution that made his campaign possible also allows progressives to communicate directly with the public.

“What astounds me is we already have a pretty good majority of the American people who already believe in universal health care, believe that it is the government’s responsibility to make sure that health care is a right,” Sanders added. “And we have reached that stage with media not talking about the issue at all.”