It’s not really about the money. It’s about keeping teachers in their home state. 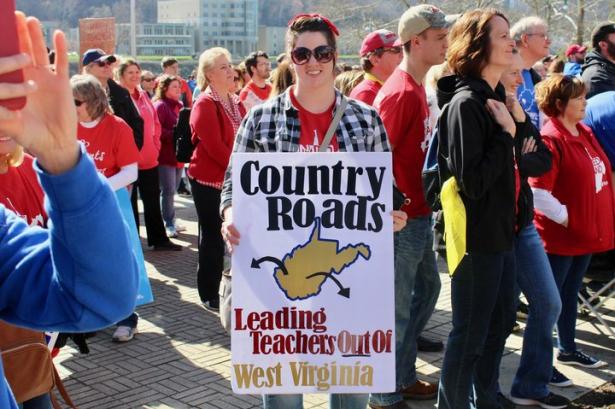 Teachers say the pay is too low in West Virginia to keep them in the state. , Dave Jamieson/HuffPost

CHARLESTON, W.V. ― When Katie Cole recently missed three days of work due to a medical emergency, her West Virginia school was stretched too thin to provide her classroom with a qualified substitute teacher. Instead, her room full of preschool special-needs children was helmed by a teacher’s aide with the help of a parent.

“We just don’t have enough substitutes,” said Cole, who’s 24 and in her second year of teaching.

Striking teachers with stories like Cole’s have flooded the halls of the West Virginia capitol since last week. Schools across the state have been shut down for three days in an unprecedented show of force by teachers and public employees in all counties. The workers and their unions are demanding more funding for the public employee health plan and raises significant enough to offset several lean years without them.

But in interviews, school employees who traveled from across the state to Charleston said the fight was about much more than their paychecks. West Virginia is one of the few U.S. states with a falling population. As the state grapples with a severe teacher shortage, many educators worry their younger peers will continue to flee for greener pastures, with long-term consequences for successive generations of students.

A series of business tax cuts have left the state with little money to give public servants who’ve been waiting for meaningful raises. West Virginia now ranks 48th out of 50 states and the District of Columbia in teacher pay, and it was one of just five states to see average teacher pay go down in 2016, according to the National Education Association. Of West Virginia’s 55 counties, more than half border a state with better teacher pay. And the state was trying to fill 700 vacant positions as of last spring.

“There’s just no reason to stay here, especially the ones who aren’t married,” said Patty Hamilton, a second-grade teacher with 30 years at the same elementary school. “It’s very sad that this is happening.”

As one protester’s sign outside the capitol succinctly put it, “Country Roads: Leading teachers out of West Virginia.”

Cole herself is a prime example of what’s at stake. A recent graduate of West Virginia’s Marshall University, she carries around $50,000 in student debt and makes a salary of around $33,000, she said. She wants to earn her master’s degree but fears taking on more loans when legislators balk at 1 and 2 percent raises. She guesses she sinks around $1,000 per year into supplies for her classroom to make up for inadequate funding. Her fiancé believes they have better prospects out of state. What’s kept her in Kanawha County so far is her fidelity to home.

“It’s something you can’t explain to people who aren’t from here,” Cole said.

The feeling among strikers is that the state has milked their love for teaching and for West Virginia as much as it can. While many teachers receive annual increases based on length of service, the state legislature has not granted teachers an across-the-board pay increase since 2014. In the meantime, health care costs have increased, leading take-home pay to decline for some. Long accustomed to modest salaries, many teachers said pay raises are less important to them than stabilizing the Public Employee Insurance Agency, or PEIA.

Without a guarantee to curb health premiums, teachers could still lose out even with statewide pay raises, according to Greg Cruey, a K-8 social studies teacher in McDowell County, along the Virginia border. “They could give me $80 with the left hand and take $130 with the right,” he said.

Cruey said he could earn an additional $10,000 working across the state line in Virginia. He works at a school with 32 teaching positions, nearly a third of which he said are not staffed by a regular teacher. Some classrooms, he added, see four different teachers over the course of a year due to staff shortages and turnover. “The kids are instructional casualties,” he said.

The last time West Virginia schools closed due to a strike was 1990, in a work stoppage that lasted 11 days. While the current walkout was initially scheduled for just last Thursday and Friday, local unions agreed to continue it into this week. Christine Campbell, president of the American Federation of Teachers-West Virginia, told a crowd of thousands in front of the state capitol on Monday that schools would be closed on Tuesday.

Public sector workers in West Virginia do not have collective bargaining rights, and strikes by public employees are illegal. School districts could potentially pursue court injunctions ordering teachers and other employees back to work if the strike continues.

But judging from the honks of support from drivers passing protests and picket lines ― not to mention the considerable number of students who came out to protest at the capitol ― the teachers have a lot of public support behind them. They are gambling that legislators and Republican Gov. Jim Justice will make a satisfactory offer before they begin to lose leverage.

Justice was expected to travel to a handful of counties across the state on Monday, in what unions described as an effort to urge certain districts back to work to weaken the strike. But at publication time, all 55 counties were still onboard according to Kym Randolph, spokeswoman for the West Virginia Education Association.

Among many teachers, there’s a sense that they have little to lose. Paige Muendel, a seventh-grade special education teacher from Morgantown, said her take-home pay has decreased due to rising health care costs. She lives close to the border of Pennsylvania, a state where the average teacher salary is $20,000 higher. So far, she’s resisted looking for a job there, but she doesn’t know how long she could hold out under the status quo.