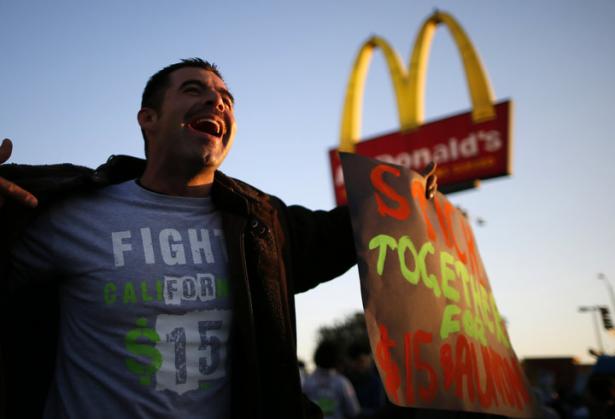 The labor union that has orchestrated and funded the Fight for $15 campaign in fast food and other low-wage industries appears to have significantly cut its funding for the groundbreaking campaign.

The Service Employees International Union poured around $10.8 million into Fight for $15 in 2017, down from around $19 million the previous year, according to an analysis of Labor Department filings by The Center for Union Facts, a conservative group critical of unions and the fast-food campaign.

The biggest cuts appear to have hit local organizing committees, which have done the on-the-ground outreach to workers and coordinated the fast-food strikes that began in 2012.

The funding pullback does not come as a surprise. The SEIU implemented steep budget cuts in the wake of President Donald Trump’s 2016 election win, which signaled an inhospitable regulatory atmosphere for unions. Close watchers of the Fight for $15 suspected the high-profile campaign would be subjected to belt-tightening as labor law became less friendly to organized labor than it was under former President Barack Obama.

For all its successes, the movement has not translated into more dues-paying union members for the SEIU.

By organizing walkouts and protests by fast-food workers, the Fight for $15 raised worker pay by spurring minimum-wage hikes in cities and states around the country, and made a $15 wage floor a plank of the Democratic Party. In some regards, it has been the most successful labor organizing campaign in years, bringing unprecedented public attention to the plight of low-wage workers.

But for all its successes, the movement has not translated into more dues-paying union members for the SEIU, raising the question of how long the union could continue to robustly fund it.

“The fearlessness and courage of working people nationwide ― including thousands of fast food, home care, child care and airport workers ― has made the Fight for $15 and a union a powerful movement for change,” a union spokesperson said in an email. “SEIU is putting the same amount of energy and resources behind the movement to continue supporting the 64 million Americans working-wage jobs and build the most inclusive middle class this country has ever seen.”

The Center for Union Facts calculated the funding drop by looking at the money SEIU directed to local workers centers that have done much of the organizing, as well as a public relations firm that promoted the campaign.

“While the SEIU’s Fight for $15 has scored some legislative victories, it has failed to secure new dues-paying members in quick-service restaurants,” Luka Ladan, a spokesman for the group, said in an email. “The Fight for $15 funding cut suggests union officials have realized it’s a fight they cannot win.”

Rather than file for small union elections at individual restaurants, most of which are run by franchisees, the SEIU had hoped regulatory changes would compel big companies like McDonald’s to come to the bargaining table with workers. But Trump’s influence on labor policy has made that increasingly unlikely, with his nominees to the National Labor Relations Board (NLRB) making it more difficult for workers to unionize.

The organizing of fast-food workers created a public relations nightmare for McDonald’s and other big chains, which were pilloried for their low pay. Many workers claimed they were illegally fired or punished for taking part in strikes aimed at improving their working conditions.

But McDonald’s has much less to worry about under the Trump administration. New leadership at the NLRB has already reversed the Obama-era definition of joint employer, bringing applause from business groups. As Bloomberg reported, the board is apparently moving quickly to settle the McDonald’s case to avoid a union-friendly precedent.