This Black Muslim Attorney Isn’t Just Running For Congress. She’s Fighting For The Soul Of The Resistance.

Primary races around the country have witnessed record voter registration, as well as an influx of political neophytes who represent numerous demographics vying for visibility. Tahirah Amatul-Wadud is among this cohort, running in a progressive but mostly white Congressional District. 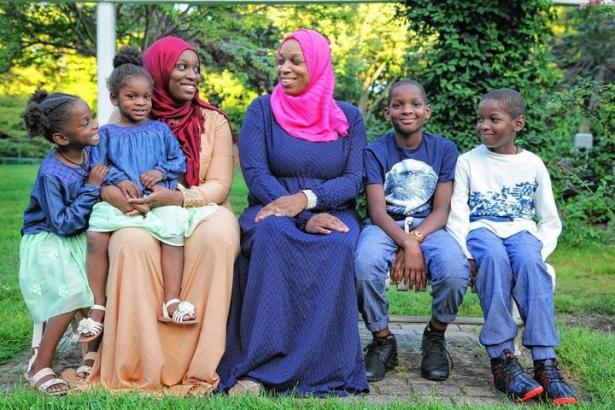 hirah Amatul-Wadud, center, with five of her seven children. She says the safety of her husband and especially her sons makes her more attuned to the risks black men face. , Tahirah Amatul-Wadud

“I’ve always navigated in spaces where I’m the only person like me.”

In her first go at politics, Tahirah Amatul-Wadud is observing some of the frustrations of a budding campaign in Massachusetts’ 1st Congressional District. The Springfield attorney and mother of seven is running against the incumbent, Rep. Richard Neal, in the Sept. 4 Democratic primary ahead of a general election that’s expected to heavily favor House Democrats.

Amatul-Wadud says excitement about the prospect of a Democratic victory this fall is greasing the skids for her opponent to win and assume a senior role in House leadership. And responding to a recent piece in The Boston Globe celebrating Neal’s seniority, she argued against favoring perennial politicians over reliably progressive candidates.

These tensions are emblematic of the partisan Trump era, in which Democrats deeply entrenched in the party’s power structure are brought into conflict with a voter base hankering for unabashed progressives. Primary races around the country have witnessed record voter registration, as well as an influx of political neophytes who represent numerous demographics vying for visibility.

Tahirah Amatul-Wadud is among this cohort. And as a black Muslim woman with seven children, she aims to inject what she perceives as unspoken truths about living conditions in Massachusetts, and the country more broadly, into the political debate. She’s running on a platform that includes advocating for criminal justice reform, Medicare for all and universal internet access.

“I look at Kamala Harris as a black woman,” she said of the senator from California, in describing how she develops her campaign message.

“I look at Stacey Abrams as a black woman, Keith Ellison and Andre Carson as Muslims, President Obama as a black man, Elizabeth Warren as a white woman, Maura Healey as a white woman ― particularly, both of them representing Massachusetts,” she said, listing the Georgia gubernatorial candidate, the Minnesota and Indiana congressmen, the former president, the Massachusetts senator and the Massachusetts attorney general, respectively. “I pay really close attention to what they do, how they communicate, what they say, and I’m just creating my own kind of formula.”

Amatul-Wadud sat with HuffPost to discuss the soul of the Democratic Party, her trials running as a candidate of color and the expansion of possibility in progressive politics.

Candidates of color ― particularly those who are breaking into the political environment for the first time ― have expressed frustration in garnering respect for the legitimacy of their platform. Is that a problem you’ve experienced?

Not in my district. In my district, my platform is pretty solid and resonates with the people who are giving my campaign life. Just some statistics: My district is 88 percent white.

It actually might be 1.9 percent black and 6 percent Hispanic, depending on which years you’re looking at. Yeah. [Laughs.] There’s not a lot of [people of color] here.

To that point, I read a quote from you saying you were prepared and given resources to help you understand effective ways to run as an African-American candidate, but it took some time to learn how to navigate your religion in a political sense. How would you describe that learning curve?

It’s so complex, and so many answers to that question rush to my mind. One of the things that I do, by standard, is describe my history: I was born into a Christian family and then my parents became Muslim, and that seems to let people know that I’m closer to most of them in the room than they suspected. And that’s something that I often feel is important for me to do. But still, I’ll get policy questions that I know are trying to scratch the surface of whether I lead with my religious beliefs, and I try to address those in a secular way. I’m aware of where the question is coming from and why these things are being asked. I’m... just very cognizant. But the reality for me is that the question that startles me the most is when people say to me, “How will you work with white people?”

And these are white people asking you this?

Oh, wow. How do you respond to a question like that?

I explain that by virtue of my education and my work experience, I’ve always navigated in spaces where I’m the only person like me and that a lot of the spaces I’m in are predominantly white. And I explain that there’s a universality to my story, and my message and my platform that allows people to appreciate me beyond my race. And that’s true. I just got an endorsement from a group called Franklin County Continuing the Political Revolution. Franklin County is a district that is nearly 100 percent white. And that endorsement didn’t come randomly. I worked for that.

I think someone responding to questions like this one could draw a lot of conclusions about where we are socially and the sort of internal reckoning many white voters may be experiencing now.  What do you think would prompt people to ask this?

Putting the best construction on it, I worry that when people ask questions like these, they’re not giving their colleagues, their neighbors, their friends, their families the benefit of the doubt that they’re open-minded. I also think the person asking it may be giving themselves too much credit for being the only one who’s open-minded enough to listen to a candidate like me. I think they themselves need to be educated to understand that the community is ready for a change and they really don’t care what color or packaging it comes in.

[A] year ago, my friends were still telling me that they were waking up feeling like they had an elephant sitting on their chest. Tahirah Amatul-Wadud

This is your first run for office, and I wonder what it was that spurred your interest in politics? What was the catalyst? Why now?

I’m a lawyer, I run my own practice as a family law attorney, I manage a few civil rights cases and I do some volunteer work for the Massachusetts Commission on the Status of Women. All of that work combined has allowed me to give exposure to people’s needs in our district and throughout Massachusetts. And after the election of Donald Trump, when people were really mobilizing to figure out how they wanted to shape our future, our congressional representative [Neal] seemed not to know how to respond, how to stay on top of that and how to give people a sense that he was paying attention. I’ve lived here since I was a little girl, I’ve studied his record, and I realized that in order to have the most significant impact most immediately, I needed to do this. So, yeah. [Laughs.] It’s big, it’s ambitious, it’s bold, but it’s already serving the people because I’m talking about issues in our community in a way that nobody else is.

I think, too, we’re witnessing a moment in which we’re seeing candidates succeed who’d never run before. It seems, at least from the outside looking in, that there’s a legitimate potential for success that may not have been there in years past. Am I correct in thinking that?

Yes! And people want to feel like they’re a part of that. They want to feel like they’re donating to a campaign that’s part of this change — something historic. So you’re right: It excites people. And that’s great, because a year ago, my friends were still telling me that they were waking up feeling like they had an elephant sitting on their chest, because the depression and anxiety around what was happening in our country still felt so real after the inauguration. So the idea that, now, there’s this new feeling in the air — it changes things. I don’t know how to explain it, but it just gives people more hopefulness in their lives.

Yes. Yep. Oh, my goodness, that is something I love to talk about. 2015 and 2016 became transformational years in my own life. We had so much amplification of the murder of black men due to police brutality, and it forced me to start viewing my husband and my children — my sons in particular — in a different way. I’ve always had compassion for them, I’ve always understood that they were more at risk than other kids, but to realize their vulnerability and the fragility of their lives changed me forever. It’s given me a level of compassion that has worked its way into the campaign.

I am not shy about talking about race disparity in a room full of people who do not look like me, and using that as my primary platform. That takes some … courage. [Laughs.] But it’s something we have to talk about, and I owe that to the entire district. I owe it to the minority population, and I owe it to the majority population, because it is a real factor that impacts all of us. Before 2015, I would never talk about race and race disparity in public unless I was very careful. I’m talking about race, black people and white people every day now, but I have agency to do it because I’m a lawyer, I have this experience, I have children, I have an education, I have credibility and I’m using that to amplify a message of equality.

Did you detect any lingering animus when you approached voters with a message of racial justice? Massachusetts is a state with its own fraught racial history. How are you being received?

Very well. Universally well. I have never had a person come up to me and say I was alienating or wrong.

That’s interesting. Knowing that you were able to have those conversations without, in your belief, turning anyone off, what do you say to people in your party who say invoking race and gender in your policy platform stands to drive people away?

It’s all about making sure the message is one people understand and is delivered in a way that doesn’t alienate. It also requires a sense of sincerity or genuineness. I don’t know that I have the secret potion for how to do that, but I don’t see conversations about race and disparity as identity politics — I see it as a problem we all need to talk about.

It’s important for me to convey that my being in the race is already a victory for our entire community. Regardless of who identifies themselves with me or the district, we’re already winning because we’re amplifying the needs of so many people throughout the district and throughout the country. And I consider that a victory.