How Ancient Teeth Reveal the Roots of Humankind

From diet to evolution, prehistoric chompers tell archaeologists a surprising amount about our ancestors. 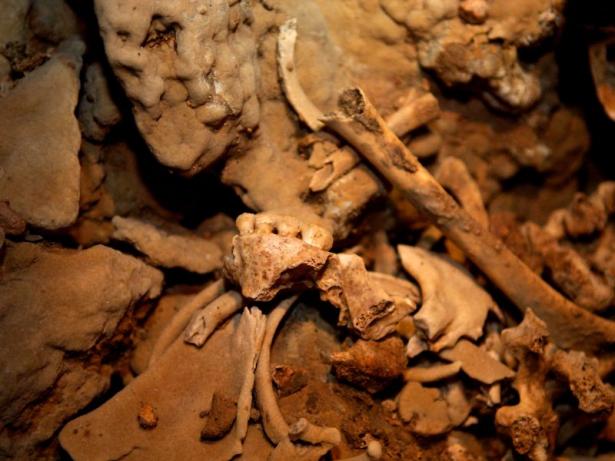 Due to their ubiquity at archaeological sites, teeth are like the pennies of ancient human remains. But unlike pennies, fossil chompers can be a treasure trove. , National Geographic Creative / Alamy

Ten thousand years ago, Mesolithic hunter-gatherers of the Croatian Peninsula caught fish (perhaps using their teeth to remove the scales) and foraged for starchy plants. Scientists know this thanks to a handful of ancient teeth, whose plaque revealed microfossils of fish scales, fish flesh and starch granules. That calcified bacterial gunk is helping researchers understand the diet of these hunter-gatherers—once thought to be a nearly impossible task, since there are so few human remains from the time period, and foodstuff doesn’t generally survive in the fossil record.

This finding, published in a recent Nature study, is just one of myriad discoveries made possible by the archaeological miracles that are teeth. Teeth are disproportionately prevalent in archaeological sites: scientists often find dozens or hundreds for every skeleton or skull. That’s because the enamel covering a tooth is already 97 percent mineral, and teeth are stronger than bones, so they’re more likely to survive, writes anthropologist Peter Ungar in Evolution’s Bite: A Story of Teeth, Diet, and Human Origins.

In other words, teeth are like the pennies of ancient human remains; they turn up everywhere.

But unlike pennies, they’re often a treasure trove. Everything from the tooth’s shape to its enamel thickness tells researchers something about the human whose mouth the tooth once inhabited: what they ate, where they lived, what diseases they had. As paleoanthropologist Kristin Krueger puts it, teeth are “little pieces of a puzzle that could help see the ‘big picture’ of someone’s life.”

Krueger assembles those puzzle pieces with the help of a robotic device called ART, for Artificial Resynthesis Technology. The chewing simulator imitates a human jaw to reveal how noshing on different foods impact the teeth, looking to see whether those foods leave tiny abrasions on the machine’s “teeth.” “This has significant implications in our understanding of hominin diets, especially those hominis who are thought to consume a large amount of meat,” Krueger said by email. She and her colleagues have already discovered that meat doesn’t leave microwear signatures, which could change how scientists analyze the teeth of hominins believed to be particularly carnivorous, like Neanderthals.

Teeth may seem humble compared to more dazzling specimens like skulls, but the bony protuberances offer more than their share of surprises. “I’m constantly amazed by what I find when examining teeth,” Krueger said. “They truly are little windows into the life of an individual.” Explore some of the most exciting discoveries made with the help of ancient chompers, and the technology that’s making these insights possible. 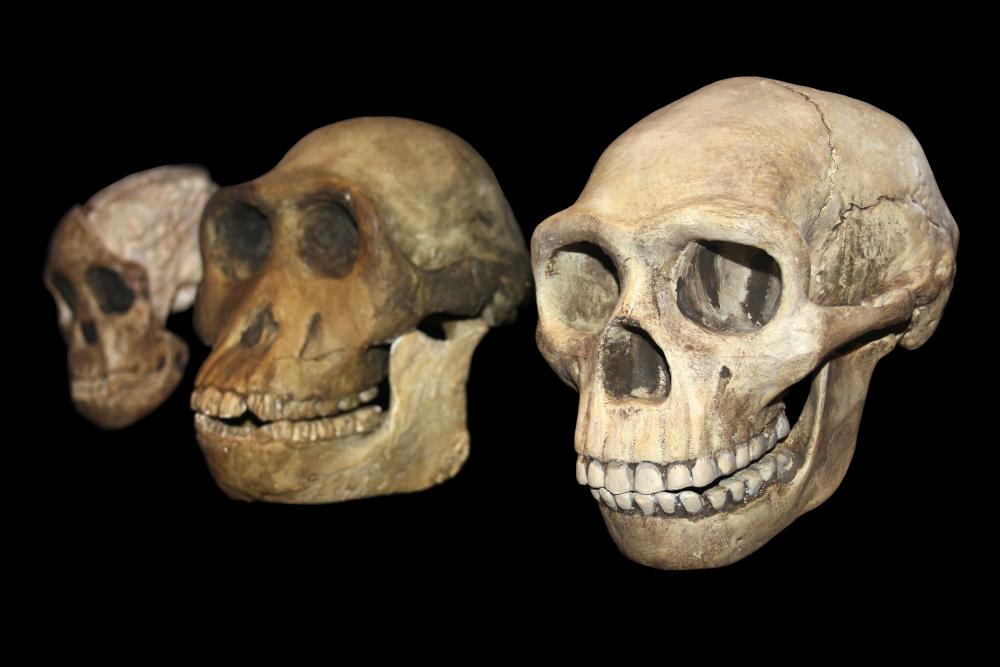 While the marine diet of ancient Croations is exciting news for scientists, other finds have proven just as spectacular. Take, for example, the Australopithecine Lucy. Chemical analysis of her teeth shows that, as far back as 4 million years ago, the diets of hominins suddenly became much more diversified than other primates. Apes living in trees were still ordering off the prix-fixe menu of the jungle, whereas the more human-like hominins had expanded their palate to the buffet offerings of jungle andsavannah.

Carbon signatures of the ancient teeth show that Lucy and her kin had expanded beyond fruits and soft buds of trees and shrubs to actually eating other animals; the development of thicker enamel reflects that they had also developed more protection to eat seeds, nuts and roots. “To what extent this dietary shift reflected active hunting, or the gathering of small prey such as arthropods, or scavenging, or a combination of all these, is still unclear, but something plainly happened,” writes paleoanthropologist Ian Tattersall in The Strange Case of the Rickety Cossack and Other Cautionary Tales from Human Evolution.

The dental record can also reveal important markers of health to anthropologists. In one study, researchers looked at dentine—the tissue that forms beneath enamel—in modern Greek people, compared to prehistoric Middle Eastern communities. Modern Greeks had levels of vitamin D deficiency that were four times higher than their ancient ancestors, perhaps due to spending more time indoors or changes in clothing, though researchers have yet to find a definitive answer. Pre-agriculture peoples also had significantly lower rates of cavities, and researchers have begun extracting bacterial DNA from calcified plaque to see how strains of bacteria changed after the introduction of farming.

Despite claims made by adherents of the “Paleo Diet” (which, to be clear, is not reflective of an actual paleolithic diet), not all health outcomes of prehistoric life were positive. Debbie Guatelli-Steinberg, an anthropologist at the Ohio State University and author of What Teeth Reveal About Human Evolution, has seen firsthand how disease and malnutrition plagued Neanderthals. For this she studies linear markings on the enamel called hypoplasias, which occur when enamel formation stops for a short period due to genetic causes or environmental ones.

“Some disruptions [in Neanderthals] were quite long, almost up to three months,” Guatelli-Steinberg says of her research. “It’s difficult to interpret, but when there’s a long period of time like that, it might be more likely that it has something to do with malnutrition.” 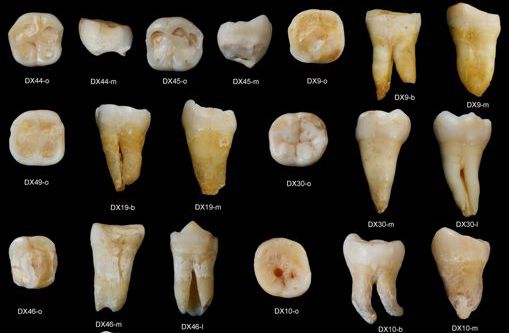 In 2015, researchers uncovered one of the most significant finds in dental archaeology: 47 teeth in a cave in southern China. Identified as belonging to Homo sapiens, these teeth provided evidence that our species arrived in Asia much earlier than previously thought—as far back as 80 to 120 thousand years ago.

Other researchers have studied the bacteria of ancient plaque to understand migration among the Polynesian islands, and performed chemical analysis on teeth looking at strontium isotopes, which come from groundwater and get locked into the enamel. If the strontium changes between an individual’s first molar and second one, that suggests migration from one place to another.

“Another way is to look and see how much variation there is in females versus males,” Guatelli-Steinberg says. If there’s more variation in the females than the males, that might mean the females were migrating from different areas. (How do we know whether the individual in question is female or male? It turns out that question can also be answered chemically by testing one of the enamel-forming proteins.)

Teeth also offer tantalizing insights into behavior. Krueger, for example, has examined the wear on Neanderthal teeth to understand how they used their mouths as an extra tool. “While those individuals living in more cold and open conditions used their front teeth for clamping and grasping (most likely using their front teeth as a third hand during animal hide preparation for clothing or shelter), those in more wooded and warm environments were occasionally using their teeth to soften fibers or wood, or perhaps to retouch tools,” Krueger said by email. 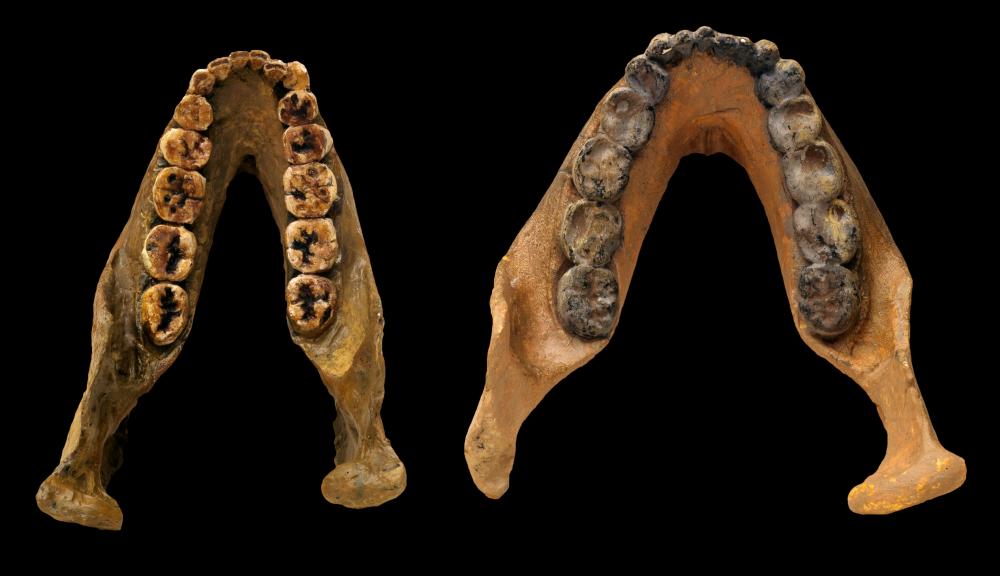 Compared to modern humans, many hominins had toothier mouths. The “Nutcracker,” (aka Paranthropus boisei), a hominin that lived 2.3 million years ago, had the largest molars and thickest enamel of any hominin. Homo erectus, which lived all over the world 1.5 million years ago, had larger canines than modern humans. But both still followed the evolutionary trend of generally decreasing tooth size: The size of our jaw and teeth have slowly been shrinking over millions of years. Modern humans normally end up with 32 teeth by the time they’re fully adult, including four wisdom teeth that often have to be removed because there just isn’t room for them.

“This has largely been attributed to changes in dietary strategies,” Krueger said. “Why did our dietary strategies change? They were adaptations to changing environmental conditions that are well documented during the Plio-Pleistocene.”

Thanks to the huge variations in teeth between modern Homo sapiens and all its ancestors, teeth are a wonderful tool for identifying species. But how do scientists know if a particularly large or small tooth should be classified as a different species, or is just an example of variation within a species? That was certainly the question surrounding a single 750,000-year-old molar discovered in 2015. It was the smallest molar ever found in Africa during the Middle Pleistocene, which increases the amount of variation among all samples for the region. As to which species it belonged to, that has yet to be determined.

According to Krueger, there’s no clear-cut answer for these tricky questions of identification.

“Think about the size difference alone that one can find in living humans. Think a basketball player versus a horse jockey!” Krueger said. “All paleoanthropologists agree that variation existed in the past, but disagree as to the boundary line between variation within one species versus enough variation to represent a different species.”

Besides jaws that don’t leave enough room for our teeth, another hallmark of modern humans is our exceedingly long developmental process, which is reflected in how long it takes us to get a full mouth of adult pearly whites.

“We have these long childhoods in which we learn and master skills for our survival, and we seem to have the longest periods of development of any nonhuman primate,” says Guatelli-Steinberg. Knowing how long it takes modern humans to outgrow their baby teeth and gain a complete set of adult molars is useful in looking at the archaeological record and comparing other species’ development to our own.

Scientists track this change using a neonatal line that forms on the first molar at birth—a faint line that’s visible under the microscope—which Guatelli-Steinberg compares to a birth certificate. That line is the starting point: from there, scientists can count the subsequent perikymata, enamel lines that form on a daily basis like tree rings, to learn how developed a child’s teeth were at the time of their death. For example, a jawbone with teeth found on Gibraltar and attributed to a young Neanderthal child was given the age of three years at its death, and showed slightly more accelerated tooth eruption than in Homo sapiens.

Other researchers have used similar methods to argue that development most similar to that of modern humans began following the emergence of Homo erectus. While Erectus still had faster tooth development than our species, they were slower than the hominins that came before. Guatelli-Steinberg and her colleagues recently submitted a paper on the dental development of Homo naledi which seems to distinguish it from other early hominins, and she hopes their work will be just the beginning of studies into this newly discovered species.

Lorraine Boissoneault is a contributing writer to SmithsonianMag.com covering history and archaeology. She has previously written for The Atlantic, Salon, Nautilus and others. She is also the author of The Last Voyageurs: Retracing La Salle’s Journey Across America. Website: http://www.lboissoneault.com/