Andrew Gillum, Stacey Abrams, and Ben Jealous Could Be the First Black Governors of Their States. Here’s How They Got This Far.

By bringing together a highly engaged black voting base with Sanders’s deeply committed core base of supporters, Gillum, Abrams, and Jealous have accomplished what Democrats will need to do if they are going to have any real success moving forward 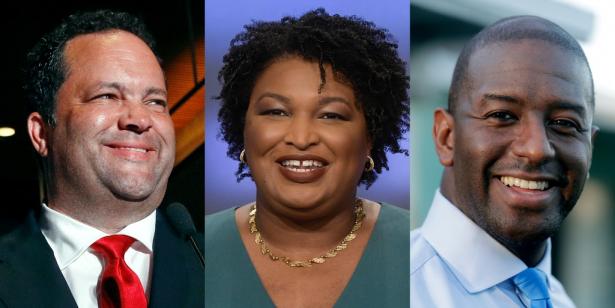 WHAT WE ARE experiencing right now is absolutely historic. The United States does not currently have a single black governor — not one. Florida, Georgia, and Maryland have never had a black governor. No black person has ever been the Democratic Party nominee for governor in Florida or Georgia. But that seems poised to change.

On Tuesday night, Andrew Gillum pulled off a stunning win in Florida’s Democratic primary for governor. He joins Georgia’s Stacey Abrams and Maryland’s Ben Jealous as the third brilliant, successful, and progressive black leader elected to represent the Democratic Party in a gubernatorial race this November. Each of those elections will be a brutal nail-biter, but success is possible.

I’m sorry if you’ve heard me say this before, but it’s hard to understand a moment in history when you are in it. History is better seen, understood, and valued in retrospect. Still, we can already tell that we’re witnessing something potentially monumental. I won’t go as far as calling this moment the new Reconstruction, but we haven’t seen the possibility of this type of political representation at the state level since the years following the Civil War.

How did this happen?

First, let me paint with broad strokes for a moment, then we can get down to the details.

The three candidates are widely known and respected in their home states. They are not fictional creations of a political machine. They’ve been working hard for the people in Florida, Georgia, and Maryland for more than a decade. They have well-established political networks there. Before this spotlight was on them, they had each already fought for change and won on many different occasions. Gillum, now the mayor of Tallahassee, was the youngest person elected to its city council at age 23. Abrams is a former state lawmaker who served as the minority leader of Georgia’s House of Representatives for six years. Jealous is a first-time politician, who became an activist during his college years, eventually working his way up to become the NAACP’s youngest-ever president.

They understand the media landscape. They’ve been on the big stage. They’ve spoken to huge audiences. They understand the nuances of get-out-the-vote campaigns and polling locations. They’ve built and managed teams and organizations. They are each seen as young — Jealous is 45, Abrams is 44, and Gillum is 39, but they are actually seasoned political veterans who’ve been in the public sphere their entire adult lives.

You have to start there. Anything else will put the credit for their victories where it doesn’t quite belong. Gillum, Abrams, and Jealous won because their entire lives and careers built up to this moment. I don’t mean to sound brash, but they are winners. They expected to win. They’ve won before. And that matters.

All three of them are also practical, down-to-earth bridge builders. They have strong views and policies, yes, but all three understand that to get stuff done on the state or local level, you have to build functional coalitions of diverse groups. The base of that coalition may very well be black — each of them has a very strong base of black support that they build and work from — but they learned a long time ago how to build broader coalitions in order to accomplish their goals.

ENTER SEN. BERNIE SANDERS. He endorsed Gillum, Abrams, and Jealous, and he also traveled to Florida and Maryland to campaign alongside the candidates there. (Sanders endorsed Jealous almost a year ahead of his June primary, but he announced his support for Gillum and Abrams just weeks before their elections.) The Vermont senator’s efforts helped solidify the progressive base for those candidates. They’ll each tell you that it made a difference. In fact, Gillum tweeted as much within hours of winning his election. Sanders’s support wasn’t enough for them to win, of course, but it definitely helped. His base is deeply committed and trusts him. They donate. They show up to events. They volunteer and phone-bank. Sanders’s network supercharged the trio’s already progressive campaigns.

Let’s pause right there for a moment. This is a huge deal. By bringing together a highly engaged black voting base with Sanders’s deeply committed core base of supporters, Gillum, Abrams, and Jealous have accomplished what Democrats will need to do if they are going to have any real success moving forward — they have unified the devoted base of the Democratic Party with the Berniecrats. That’s no small feat — and I’m not sure anybody other than these three black candidates for governor could’ve done it this way.

So that’s the macro-narrative. Gillum, Abrams, and Jealous won because they are deeply rooted, highly experienced political organizers with pre-established bases of support who knew that, in order to win, they’d need smart coalitions.

But politics is local. And the fact is that Gillum, Abrams, and Jealous made a slew of essential local decisions that resonated well with voters. Essentially, instead of jumping to the middle, and not really committing to serious policy reforms, they did the exact opposite and took strong stands on expanding access to health care, criminal justice reform, civil rights and voting rights, a living wage, better schools and better pay for teachers, and so much more. Those issues resonated deeply with voters — so much that Gillum was outspent by a factor of five by the establishment favorite in the race, Gwen Graham, but still won. (Gillum was the only non-millionaire in the race, but his financial backing by liberal billionaires George Soros and Tom Steyer, through their groups the Open Society Foundations and NextGen America, was instrumental to his campaign.)

Gillum also took a meaningful stand on an issue that resonates strongly with voters by Florida, which has seen a number of high-profile mass shootings in recent years: gun reform. He was celebrated in early 2017for beating back a lawsuit filed by the gun lobby and supported by the National Rifle Association. No other candidate could say that. In exchange, he got the support of gun reform groups like Moms Demand Action, which endorsed him in April. Young activist survivors of the Parkland school shooting campaigned for him.

All of that mattered.

But in the end, Gillum, Abrams, and Jealous made it this far because they out-organized their opponents. They built complex ground games that got people out to vote. They crisscrossed their states, holding rallies and town halls, shaking hands, looking voters directly in the eye, and answering tough questions. They went to community centers and senior citizen homes. They held large events, but ultimately won people over in living rooms and at kitchen tables.

Many things about how the 2016 presidential campaign went down turned me off to the Democratic Party. And it’s not just the presidency: The party has no control over either the House or the Senate. The same goes for the majority of state legislatures and governorships across the country. But these candidates give me hope. They are different.

Shaun King is a Brooklyn-based columnist who focuses on civil and human rights, racial justice, mass incarceration, and law enforcement misconduct. Before joining The Intercept, he was the senior justice writer at the New York Daily News and the writer-in-residence at Harvard Law School’s Fair Punishment Project. Email Shaun King. Twitter.

Original Reporting. Fearless Journalism. Get The Intercept Delivered to You.