The three centrist Democratic caucus groups could boast as many as 90 members or more in January when new lawmakers elected this month are sworn in. 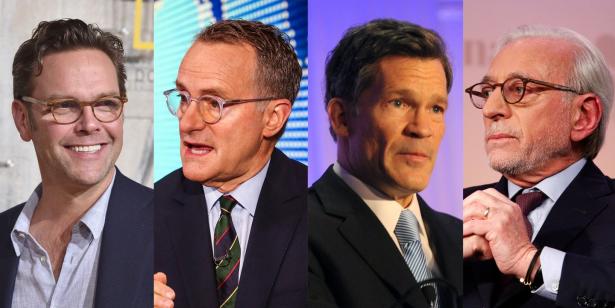 JUST THREE YEARS ago, hedge fund manager Louis Bacon was writing a $19,600 check to a committee called “Boehner for Speaker.”

Now, the billionaire GOP donor has pivoted to influence the future of the Democratic Party. Records show Bacon is one of several deep-pocketed donors that have shifted to financing recent Democratic campaigns. Though national media attention has focused largely on newly elected democratic socialists and progressive members, the House Democratic caucus has also swelled with pro-business moderates, such as the Blue Dogs, the Problem Solvers Caucus, and the New Democrats.

The newly ascendent centrists flexed their muscle this week when a bloc of moderate lawmakers imposed a set of rules on Rep. Nancy Pelosi in her bid for speaker of the House, forcing the California Democrat to accept parliamentary changes that are designed to give the GOP greater access to floor votes and amending legislation.

The rule changes were proposed by the Problem Solvers Caucus — a nearly 2-year-old group affiliated with the organization No Labels that consists of 24 House Democrats and 24 House Republicans. Many of the members of the caucus were elected with financial support from Bacon, the billionaire hedge fund manager, along other wealthy donors with a long history of giving to Republicans.

On Monday, the Blue Dog Coalition also formally announced the addition of eight new members, bringing the total group to 24 members. The new members represent a rebound for the caucus, which has lost a lot of its members since the 2010 tea party wave. The recent electoral success is at least partially thanks to close ties to Democratic leadership — the Blue Dog caucus, notably, helped the Democratic Congressional Campaign Committee identify pro-business candidates for swing districts ahead of the midterm elections.

The Blue Dog caucus is known for embracing a corporate-friendly agenda draped in rhetoric about finding common ground with conservatives. The caucus has a long history of supporting defense spending, fiscal austerity, and corporate-friendly free trade deals and regulations, while opposing civil rights legislation and expanded social services.

The three newly elected Blue Dog co-chairs, Reps. Stephanie Murphy, D-Fla.; Tom O’Halleran, D-Ariz.; and Lou Correa, D-Calif., are simultaneously members of the New Democrats. Murphy and O’Halleran are also members of the Problem Solvers Caucus and were two of the members who signed a letter demanding rule changes in exchange for their support of Pelosi. The three centrist caucus groups could boast as many as 90 members or more in January when new lawmakers elected this month are sworn in.

No Labels, Lots of Cash

The newly empowered centrist Democrats rode a wave of big money into office.

Federal Election Commission records show that much of the centrist bloc has been financed by eight Super PACs associated with group No Labels, a centrist group that created the Problem Solvers Caucus.

Despite the litany of PACs, the donors remain largely the same group of about 13 wealthy businessmen, most of whom have a history of financing Republican campaigns.

Bacon, the founder of the Moore Capital Management hedge fund, gave $1.1 million in campaign contributions exclusively to GOP committees for federal office during the 2016 cycle. This cycle, Bacon gave $1 million to three No Labels-affiliated Super PACs, with much of that money flowing to races that elected centrist Democrats. One of the groups, United for Progress, played a decisive role in helping Rep. Dan Lipinski, a centrist Illinois Democrat who is anti-abortion, beat back a progressive primary challenger.

James Murdoch, chief executive of 21st Century Fox, the parent company of Fox News, gave $500,000 to United for Progress, a No Labels Super PAC. The group transferred $730,000 to another No Labels Super PAC, Progress Tomorrow, which helped Rep. Darren Soto, D-Fla., fend off a primary challenge this year from former Rep. Alan Grayson, who has been highly critical of Fox News.

Lipinski and Soto, who are members of the Problem Solvers Caucus, both signed the letter to Pelosi. They are also members of the New Democrats, and Lipinski is the former policy co-chair of the Blue Dogs.

Investor Nelson Peltz, an adviser to No Labels, has donated $900,000 to No Labels Super PACs and directly to several centrist Democrats that pressed to impose new rules on Pelosi, including Reps. Josh Gottheimer of New Jersey and Tom Suozzi of New York, and Murphy, the representative from Florida. Peltz is also a major donor to Donald Trump, having given to the president’s campaign and joint fundraising committee over the last two cycles.

Peltz, who made much of his fortune using junk bonds, has awarded himself very large pay packages. At one of his former companies, known as Triac, he paid himself $29 million for a company with only $1.2 billion in sales. After the election in 2016, he urged support for Trump and called for policies that give investors a special tax holiday on repatriated oversees profits.

Dan Webb, co-executive chair of the law firm Winston & Strawn, gave $100,000 to Citizens for a Strong America, one of the No Labels Super PACs. Webb’s other direct federal donations this cycle only went to two incumbent House Republicans.

The individual donors named in this article did not respond to requests for comment. Melanie Sloan, a spokesperson for No Labels, noted that she’d seen our request to at least one of the donors. In a statement, she said, “No one in the Problem Solvers Caucus takes their marching orders from a donor.”

The Problem Solvers Caucus, Sloan added, “didn’t demand plum committee assignments, goodies for their districts, a special interest provision or any of the other horse trading usually required to move a congressional vote from no to yes. They asked for reforms that are good for the whole Congress, and they started pushing for them over the summer, when they didn’t even know which party would control Congress or who would be Speaker.”

Most of the No Labels backers have not been strictly partisan in campaign giving. Howard Marks, co-founder of Oaktree Capital Management, has been a major player in Democratic fundraising circles and was a heavyweight donor to Hillary Clinton, though he also donated briefly to former Rep. Eric Cantor, R-Va. Another donor to the No Labels Super PACs, John Arnold, the former Enron energy trader, has given largely to Democrats but also to Sen. Ted Cruz, R-Texas.

Earlier this week, The Intercept reported that former Clinton adviser Mark Penn, who owns an investment company that owns a stake in a number of political consulting firms, has quietly shaped the anti-Pelosi strategy. Penn’s spouse Nancy Jacobson is the founder of No Labels.

The No Labels project touts itself as an effort to build commonsense solutions to vexing political issues. Yet the group did not demand that Republicans John Boehner or Paul Ryan seek Democratic votes or open legislation to Democratic amendments in order to serve as House speaker, a new bipartisan criteria the group succeeded in imposing in part on Pelosi.

Instead, in the era of unlimited campaign giving, the organization has provided a backdoor way for Republican donors to shape control of the Democrats, even when the GOP is defeated at the ballot box.

One of the other Super PACs that worked to elect centrist members is known as the Center Forward Committee, an outgrowth of the Blue Dog Research Forum, a now-shuttered think tank affiliated with the House Democratic caucus.

The group was formed by former Rep. John Tanner, D-Tenn., and other retired centrist Democrats. Tanner now serves at the lobbying firm Prime Policy Group, which represents many corporate clients, including FedEx, Bayer, the American Hospital Association, Google, and the National Restaurant Association.

The Super PAC spent big on electing moderate, pro-business Democrats, including Florida’s Murphy, Arizona’s O’Halleran, and Rep.-elect Mikie Sherrill, D-N.J. But unlike the New Labels PACs, the Center Forward Committee has virtually no identifiable individual or corporate donors. Out of $1.2 million the Super PAC raised, $980,000 came from Center Forward, an affiliated 501(c)(4) nonprofit that is not required to disclose its donors. Another $200,000 came from the New Democrats PAC and the Blue Dog PAC, two groups nearly fully funded by a range of corporate PAC money. Center Forward did not return a request for comment.

Despite the opaque nature of the big-money group, there are some hints.

The National Restaurant Association, an avowed opponent of expanding union rights and raising the minimum wage, is funded through company donations from the likes of McDonald’s, Coca-Cola, and Jack in the Box franchise owners, though the group does not provide a public breakdown of exactly how it is funded. The National Rifle Association, notably, directly contributed $40,000 to the Blue Dog-affiliated Super PAC, according to FEC disclosures.

Other corporate donors have given through a daisy chain of semi-disclosed entities. The Center Forward 501(c)(4), for instance, received $77,000 from NCTA, a trade group that represents Comcast, Cox Communications, and other cable giants, according to the 2017 tax filing made available to The Intercept last week.

The Blue Dogs’s name comes from paintings of dogs that once adornedthe walls of former Louisiana Rep. Billy Tauzin’s congressional office, who once hosted an informal gathering of fellow conservative southern Democrats. Tauzin, notably, switched to the Republican Party in 1995. He later oversaw the creation of Medicare Part D through 2003 legislation that expanded drug benefits to seniors. Tauzin passed the bill with a special provision preventing the government from negotiating with pharmaceutical companies for better prices.

Tauzin later retired from Congress and took the job as the chief lobbyist for the Pharmaceutical Research and Manufacturers of America, known as PhRMA, the very drug industry group whose corporate members he had showered with an unprecedented financial windfall reaped by the Medicare expansion he passed. In 2010, Tauzin helped convince Democrats to leave aggressive cost-cutting measures out of the Affordable Care Act, another win for drugmakers. That year, he was paid $11.6 million by the drug lobby for his services.

PhRMA, again facing political headwinds as Democrats confront high drug prices, appears to have been laying the groundwork for the challenge. The group’s most recently filed tax return shows that PhRMA provided massive donations to a range of pro-Trump and Republican groups, along with conservative nonprofits fighting against greater government oversight of the drug industry.

But the filings also show one seven-figure donation to Democrats: PhRMA gave $1.19 million to Center Forward last year, the dark-money group that helped elect several Blue Dogs to Congress in the Trump era.

Lee Fang is a journalist with a long-standing interest in how public policy is influenced by organized interest groups and money. He was the first to uncover and detail the role of the billionaire Koch brothers in financing the Tea Party movement. His interviews and research on the Koch brothers have been featured on HBO’s “The Newsroom,” the documentaries “Merchants of Doubt” and “Citizen Koch,” as well as in multiple media outlets. He was an investigative blogger for ThinkProgress (2009-2011) and then a fellow at the Investigative Fund of the Nation Institute and contributing writer for The Nation.

In 2012, he co-founded RepublicReport.org, a blog to cover political corruption that syndicates content with TheNation.com, Salon, National Memo, BillMoyers.com, TruthOut, and other media outlets. His work has been published by VICE, The Baffler, the Boston Globe, the San Francisco Chronicle, The Progressive, NPR, In These Times, and the Huffington Post. His first book, “The Machine: A Field Guide to the Resurgent Right,” published by the New Press, explores how the conservative right rebuilt the Republican Party and its political clout in the aftermath of President Obama’s 2008 election victory. He is based in San Francisco.

Become a Member of The Intercept.  We depend on the support of readers like you to help keep our nonprofit newsroom strong and independent.  Protecting freedom of the press has never been more important. Support The Intercept's independent journalism by becoming a member today.  Click here to donate to The Intercept.