Rethinking the Corny History of Maize 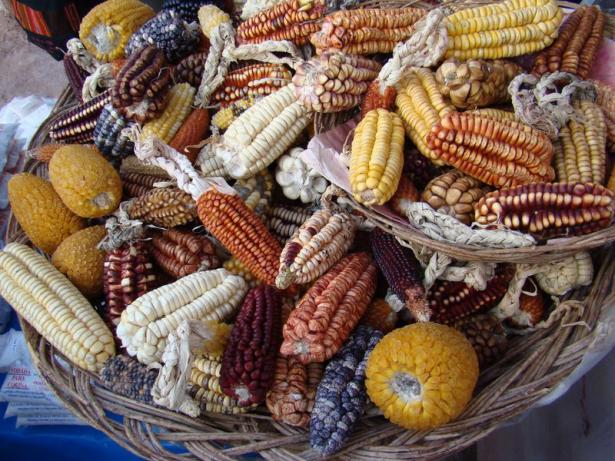 Varieties of maize found near Cuscu and Machu Pichu at Salineras de Maras on the Inca Sacred Valley in Peru, June 2007. Read more: https://www.smithsonianmag.com/smart-news/rethinking-corny-history-maize-180971038/#dkIXmPYI7ELDGCjJ.99 Give the gift of Smi, Logan Kistler

Corn is one of the world’s most important crops. We don’t just pop it and munch it on the cob; corn can be turned into flour and syrup, it is fed to livestock, it is transformed into ethanol and it can even be used to make plastic. Between 2016 and 2017, about a billion tons of corn were produced around the globe, and corn yields more than six percent of all food calories for humans.

The story of this humble yet handy starch begins thousands of years ago in Mexico, with the domestication of an ancient grass called teosinte. But according to a new study published in Science, the trajectory of teosinte’s evolution into the golden grain we know today may be more complex than scientists previously thought.

Maize domestication, the commonly accepted theory goes, happened in the Balsas River Valley of south-central Mexico. Around 9,000 years ago, early farmers in this region began selecting for favorable traits of teosinte, which looks very different to modern corn and is not particularly palatable; its cob is small and its few kernels are surrounded by a tough casing. But with human intervention, teosinte evolved into tasty, tender corn, which was subsequently carried to other parts of the Americas. By the time of European colonization in the 15th century, corn was a major food source throughout many parts of the region.

Logan Kistler, the new study's lead author and curator of archaeobotany and archaeogenomics at the Smithsonian National Museum of Natural History, says that according to this theory, gene flow from wild teosinte was still happening in some domesticated corn, but “in a major, evolutionarily important way, gene flow more or less stopped in the common ancestor of all maize.”

Recent revelations, however, prompted Kistler and his colleagues to rethink this idea. In 2016, two independent research groups analyzed the DNA of 5,000-year-old maize cobs from a cave in Mexico, and found that the ancient corn was still in the midst of the domestication process. The cobs had some genes associated with teosinte, dictating things like seed dispersal and starch production, and other genes characteristic of domesticated corn, like variants responsible for eliminating teosinte’s hard outer casing.

These findings, according to Kistler, were surprising. By the time the cobs ended up on the floor of the ancient cave, maize had already travelled far beyond Mexico, and had been cultivated in the southwest Amazon for around 1,500 years. The grain’s evolutionary story, in other words, appeared to have forked into two different paths.

“You have this paradox, this mismatch, where you already have maize being continuously cultivated in parts of the Amazon for thousands of years, and then it's still not even finished being domesticated in the center of origin,” Kistler explains. “In order to reconcile the archaeology and the genetics ... we had to think about a new domestication model.”

So, Kistler and his fellow researchers decided to take a closer look at corn DNA—and what they found suggests that while the domestication of teosinte did indeed begin in Mexico,

We shouldn’t think of maize domestication as a discrete event. Instead, the grain’s evolution was a long and convoluted process, with the final stages of its domestication occurring more than once, in more than one place.

The new study analyzed the genomes of more than 100 varieties of modern maize, around 40 of which were sequenced by the researchers. The team also looked at the DNA of 11 ancient plants. When they mapped out the genetic connections between the specimens, the researchers discovered several distinct lineages, each with their own unique relationship to teosinte. Most significantly, the results revealed that although maize domestication began with a single large gene pool in Mexico, the grain was carried elsewhere before the domestication process was complete.

“We found in the genomes evidence that South American maize actually originated within one of these semi-domestic lineages,” Kistler says. “You had these parallel evolutions happening in different parts of the Americas, with different groups of people.”

There was, according to the study, a major wave of “proto-corn” movement from Mexico to South America. The partially domesticated maize seems to have landed in the southwest Amazon, which was already a hotspot for the domestication of other plants, including rice, squash and cassava. Kistler theorizes that maize was adopted into farming practices there, giving the domestication process a chance to pick up where it left off. It is possible, though not certain, that maize in this new location evolved more quickly than maize in the center of domestication, which would explain why the 5,000-year-old cobs from the cave in Mexico appear to be in an intermediary phase of domestication at a time when maize was already being cultivated in the Amazon.

“The reason for that is you're not having constant gene flow from the wild population … where the wild maize at the edge of the field is going to be contributing some pollen,” Kistler says. “That's going to slow down the efficiency of selection, and you're not nearly as efficiently going to be able to drive selection for those traits.”

After incubating in the southwest Amazon for several thousand years, maize went on the move again, according to the study authors—this time to the eastern Amazon, where it grew amidst a general flourishing of agriculture that archaeologists have observed in the region.

Another interesting discovery lay in the fact that modern maize from the Andes and southwestern Amazon is closely related to maize grown in eastern Brazil, which points to another movement eastward. This aligns with archaeological evidence—like the spread of ceramic traditions, for instance—suggesting that people in the Americas started expanding to the east around 1,000 years ago, according to Kistler. Today, in fact, people who speak Macro-Jê languages near Brazil’s Atlantic coast use an indigenous Amazonian word for “maize.”

The pieces of this genetic puzzle did not fit together clearly at first. Kistler said that the genomic data he and his fellow researchers collected was “really confusing for a long time.”

“We couldn't make heads or tails out of what we were seeing until we started talking to linguistic experts, paleoecologists and archaeologists,” he elaborates. “Then it clicked.”

Some revelations came about by happy coincidence. While Kistler was presenting an early version of his findings in Brazil last year, Flaviane Malaquias Costa, a PhD student at the University of São Paulo, was in the audience. She pointed out that Kistler’s genetic map bore remarkable similarity to the distribution of an Amazonian word for maize. Later, Jonas Gregorio de Souza and Eduardo Ribeiro, researchers at the University of Exeter and the Museum of Natural History, respectively, helped further link this linguistic trend to the landscape.

The team’s collective work “nicely lays out an explicit model in which maize continued to evolve after it arrived in South America,” says Jeffrey Ross-Ibarra, a plant scientist at University of California, Davis, who studies the evolutionary genetics of maize and teosinte, but was not involved in this study. “While not a second domestication per se, it does highlight that South American maize has undergone a considerable amount of adaptation somewhat independently of maize in Mexico.”

For Michael Blake, an anthropologist at the University of British Columbia whose research focuses on the origins and spread of agriculture, the study’s sequencing of nine archaeological plants is particularly exciting. “We haven’t yet had very many good contexts [in South America] where we can get good samples of archaeological maize that are reliably dated and ... well enough preserved that they can yield genetic evidence,” he says.

But Blake also notes that these ancient samples were only around 1,000 years old, which is “pretty late in the evolution of corn.” There are very few archaeological maize samples from South America dating to five or six thousand years ago, which makes it difficult to get a complete picture of the grain that was carried out of Mexico.

“The genetic characterization itself may not tell us much about the morphology [or the form and structure of the plants] because we don't know precisely what the links are between aspects of morphology and the genes themselves,” Blake explains.

Kistler acknowledges that it would be “really nice” to have such old evidence from South America, but he is also thinking about the future. It’s important to understand how corn adapted to new environments in the past because the grain continues to be a vital food source today, Kistler says. The domestication of corn has to date been so successful because a symbiotic relationship between humans and the plant has flourished for millenia; by cultivating corn, humans got a reliable food source and corn was regularly sown in a nutrient-rich environment.

Our rapidly shifting climate is, however, “slightly upending that relationship,” Kistler explains. “So it's even more important to be thinking in terms of biodiversity and where adaptability is going to come from when our food production system starts to respond badly to changing, high-level climate characteristics.”

Brigit Katz is a freelance writer based in Toronto. Her work has appeared in a number of publications, including NYmag.com, Flavorwire and Tina Brown Media's Women in the World.