On the heels of a successful six-day strike in Los Angeles, teachers in Virginia, Colorado, and elsewhere in California are voicing their demands for better working conditions, and, in some cases, threatening to strike. 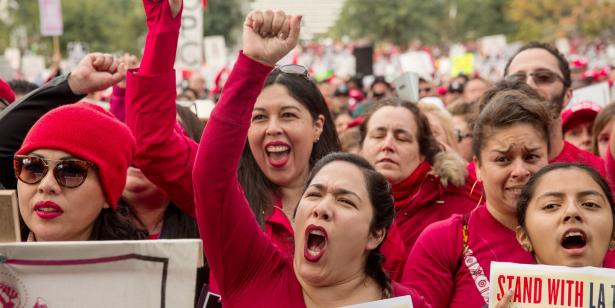 #REDFORED, THE NATIONAL teacher-led movement that started last year, continues to flex its muscles. On the heels of a successful six-day strike in Los Angeles, teachers in Virginia, Colorado, and elsewhere in California are voicing their demands for better working conditions, and, in some cases, threatening to strike.

On Monday, thousands of public school teachers flooded into Richmond, Virginia, for a one-day demonstration to pressure state lawmakers to increase funding for public education. The Richmond day of action was organized by a grassroots educator group, Virginia Educators United. It came after about nine months of planning, according to a Virginia Educators United spokesperson, and was backed by an “independent coalition” of stakeholders who support public schools, including union members, non-union members, educators, parents, administrators, and policymakers. Like the teacher uprisings in other states, supporters wore red in solidarity.

The teachers’ demands for increased funding come amid a steep drop in resources over the last decade. According to the Commonwealth Institute for Fiscal Analysis, a Virginia think tank, per-pupil state funding for the 2018-2019 school year was 9.1 percent lower in real dollars than in 2008-2009.

The march garnered local and national teacher union support. Randi Weingarten, president of the American Federation of Teachers, marched in Richmond on Monday alongside Lily García, president of the National Education Association.

Greetings from Richmond, Virginia, where an enormous crowd of thousands of teachers marched to the state capitol today to demand higher pay and school funding. #Red4Ed #redforedva #VirginiaEducatorsUnited #RedForEd

“Our folks, we’re not big in Virginia, but we’re mighty, and we have three or four very active locals that have been working closely with the Virginia Educators United,” said Weingarten in an interview Monday afternoon. “Virginia is a pretty rich state, but actually spends about a billion dollars less in education than it did before the recession, which means its priorities need to be reordered.”

Weingarten said the last straw for many Virginia educators was seeing how readily lawmakers were able to come up with a “bountiful set of tax breaks” for Amazon to open its HQ2 in the state. If the state can competitively invest in business development, the teachers say, it should be able to invest in its schools and teachers. According to data from the NEA, Virginia ranks 34th nationally when it comes to teacher pay, with the average teacher earning $51,049.

Honored to stand with @VASecofEdu and many others in support of #RedforEd. Teachers change the world one student at a time. #FundOurFuture 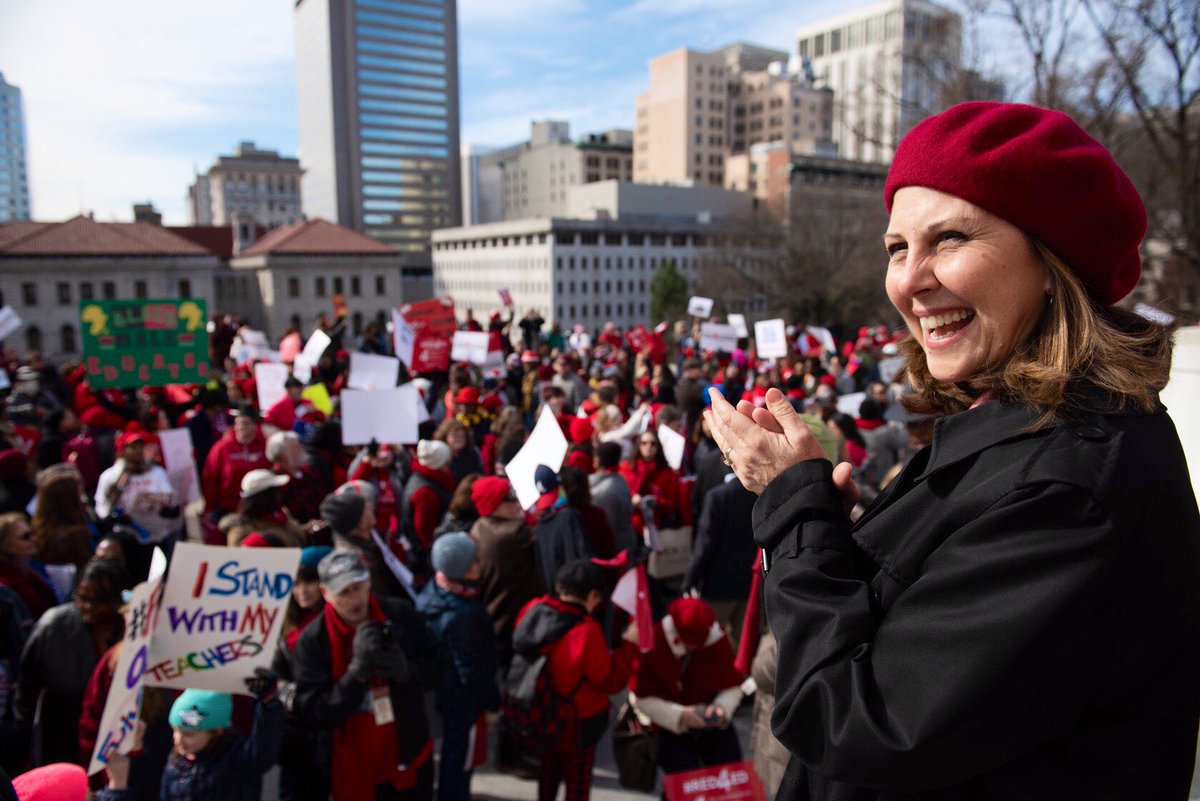 About 1,670 miles west, in Denver, teachers are also preparing to go on what would be their first strike since 1994. While the strike was scheduled to take place on Monday, last week, Denver’s public school district requested state intervention, a move that could delay the strike for up to 180 days. Democratic Gov. Jared Polis has 14 days to decide if he will intervene, and his office has so far said he is undecided. If the state intervenes, Polis could call for a neutral fact-finder to assist in negotiations, or offer resources like arbitration or mediation. A strike in the middle of state intervention would be illegal, and teachers, guidance counselors, and nurses could face financial penalties and even the revocation of their licenses.

Lisa Calderón, a Denver mayoral candidate, urged Polis to stay out of the situation. “This is not a state issue, this is a local workers’ issue,” she said recently.

The Denver school district and union are at odds over teacher pay, as well as the size of bonuses for educators who work in schools where there are high levels of poverty among students. Denver educators are also highlighting the fact that administrative spending remains much higher in their city than in other parts of the state. Throughout 2018, there were signs of growing teacher militancy in Denver, and many parents, community members, and teachers began talking about the likelihood of a strike months ago. This past April, thousands of teachers descended on Denver, the state capital, to call on lawmakers to increase funding for public education. These demonstrations weren’t technically strikes (educators called them “walkouts”), as most school districts closed down beforehand in support of the teachers.

Teacher pay in Colorado ranks 31st in the country, and last year, the average educator earned just under $53,000, according to the state’s education department. Pay can vary widely across Colorado, with some districts averaging salaries above $70,000 and others with pay closer to $30,000. Last year in Denver, the average teacher pay (before bonuses) was $50,757.

In Northern California, the Oakland Education Association has called for a four-day strike authorization vote to begin Tuesday. Oakland educators, like their counterparts in LA, have been calling for smaller class sizes, more school nurses and counselors, and higher pay. They have been working without a contract since July 2017. In 2010, Oakland teachers went on strike for one day, and in 1996, they took the streets for 26 days.

Los Angeles teachers returned to work last Wednesday after a six-day strike, their first labor stoppage since 1989. Following the strike, 81 percent of United Teachers Los Angeles members voted to ratify their new contract, which includes new caps on class sizes and commitments to hire more nurses and librarians. The union also won a commitment from the Los Angeles Unified School District to develop a plan to reduce the number of standardized tests and explore limits on charter school growth, a big point of contention in the strike. Teachers also agreed to salary increases of 6 percent, which is what the district had offered prior to the strike.