“That’s inaccurate at this point. None of that has been proven,” a local election official said. 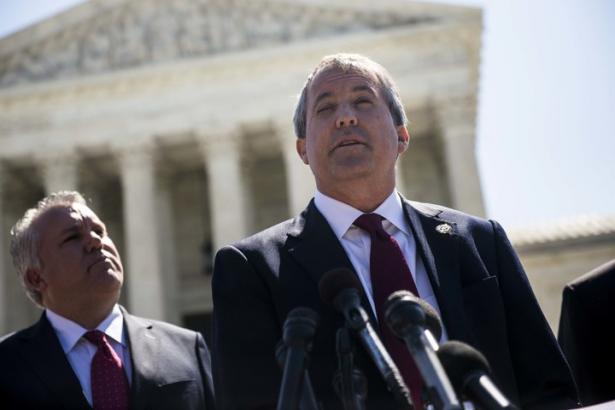 When Lisa Wise, the top election official in El Paso County, Texas, got a list of suspected noncitizens on her voter rolls, one name quickly stood out. It was the name of someone in her office who went to get a state ID a few years ago and recently became a naturalized U.S. citizen.

The data point underscores why many are skeptical about claims from Texas’ Secretary of State David Whitley (R) and Attorney General Ken Paxton (R) that 95,000 noncitizens may be on the voting rolls and that 58,000 of them voted in at least one election since 1996. Election officials, lawyers and experts said that number is likely inflated because of people who applied for driver’s licenses when they were legal permanent residents and later became naturalized.

Whitley’s office told county officials on Friday to investigate further, but Texas Attorney General Ken Paxton (R) quickly seized on the numbers and claimed there was voter fraud in the state. On Sunday, President Donald Trump amplified the claims.

Sophia Lin Lakin, a staff attorney at the ACLU’s voting rights project, said she suspected the quick claims of voter fraud were part of an effort to justify voting restrictions. Critics say requiring documentary proof of voting eligibility is unnecessary and is more likely to affect young people, who move around a lot, as well as the poor and minority voters who don’t have access to the required documentation or the resources to get them to obtain them and take them to election officials. A bill to require people to prove their citizenship was filed in the Texas House of Representatives in November.

Wise said her office received about 4,100 names to investigate from the Secretary of State’s Office on Sunday evening. She said the Department of Public Safety (DPS), which maintains driver’s license records, might have outdated records.

“When you go to the DPS and you mark noncitizen, if you go through the naturalization ceremonies where we’re at and we’re promoting voter registration, which we did about 200 a year, you’re not going back to DPS after that. They’re not being notified.”

58,000 non-citizens voted in Texas, with 95,000 non-citizens registered to vote. These numbers are just the tip of the iceberg. All over the country, especially in California, voter fraud is rampant. Must be stopped. Strong voter ID!

VOTER FRAUD ALERT: The @TXsecofstate discovered approx 95,000 individuals identified by DPS as non-U.S. citizens have a matching voter registration record in TX, approx 58,000 of whom have voted in TX elections. Any illegal vote deprives Americans of their voice.

Wise said her office would take its time reviewing the records — some of which dated back to the early 1970s — to make sure they are accurate but said she anticipated many of the names provided by the Secretary of State’s Office were errors. She added that quick accusations of voter fraud were not helpful.

“That’s inaccurate at this point. None of that has been proven. And I just don’t want that to kind of lead what’s going to happen,” she said. “When we start deciding something is voter fraud without proof, that’s a real problem.”

Sam Taylor, a Whitley spokesperson, did not return several requests for comment. He told The New York Times on Friday he didn’t “see a situation in which this would produce a false positive.”

Bruce Elfant, the tax assessor-collector and voter registrar in Travis County, said he would be very surprised if all of the names the Secretary of State’s Office submitted to him to investigate turned out to be noncitizens. His office received 4,547 records to investigate on Monday.

“We’re coming in with a healthy look of skepticism. We want to take a look at this data, analyze it for ourselves,” he said in a telephone interview. “The secretary of state is responsible for vetting all the voter registration cards that are uploaded and sent by all the registrars in Texas to the Secretary of State’s Office. They have all the data sets they used. I would be surprised, bordering on stunned, if that many slipped through their process.”

Douglas Ray, a special assistant Harris County attorney, said officials were “very skeptical about the accuracy of this list.” He said the county previously received inaccurate data from the state, including in 2011, when the state sent a list of allegedly deceased voters, some of whom turned out to be alive.

He added that in Harris County, which encompasses Houston, thousands of people are naturalized each month and election officials regularly conduct voter registration drives there. Officials were going to carefully review all the names on the list before taking further action, he said.

Twelve civil rights groups jointly wrote to Whitley on Monday urging him to rescind the advisory he sent Friday to counties on the suspected noncitizens on the rolls, saying his methodology was unreliable.

I would be surprised, bordering on stunned, if that many slipped through their process.”Bruce Elfant, Travis County tax assessor-collector and voter registrar

Charles Stewart, the director of the MIT election lab and an expert on election administration, estimated that up to 1 million adults have become naturalized in Texas since 1996. He said he studied similar cases in which suspected noncitizens on the voting rolls turned out to be naturalized citizens.

In 2012, Florida election officials ran a similar program that compared driver’s license records against the state’s voter registration database and flagged more than 180,000 possible noncitizens for removal from the state’s voter rolls. Officials then revised the list to 2,600 people, and 85 people were ultimately removed from the rolls. The U.S. Court of Appeals for the 11th Circuit ruled in 2014 that the state’s process for removing people from the rolls ran afoul of federal law.

In its ruling, the 11th Circuit said there was a “realistic probability” two naturalized citizens who were plaintiffs in the case would be incorrectly identified as ineligible voters through the state’s data-matching process.

Kathy Culliton-González, an attorney who represented the plaintiffs, said it is widely known that driver’s license databases do not produce reliable indicators of voter eligibility and could unfairly target naturalized people.

“They can be very intimidating. My former clients ― they’d come from Nicaragua and Haiti, respectively ― where they had fled circumstances of dictatorship. They felt very targeted and nervous,” she said in an interview. “There’s no reason for naturalized citizens to be treated differently than persons born in the United States.”

“It’s more of what we’ve been seeing over and over again ― the use of scare tactics and the fear of voter fraud to justify restrictive voting policies,” Lakin said.