food The Physics of a Perfect Pizza

Two physiciists and a food anthropologist analyze the secrets of the perfect pie and come up with a formula for home-use. 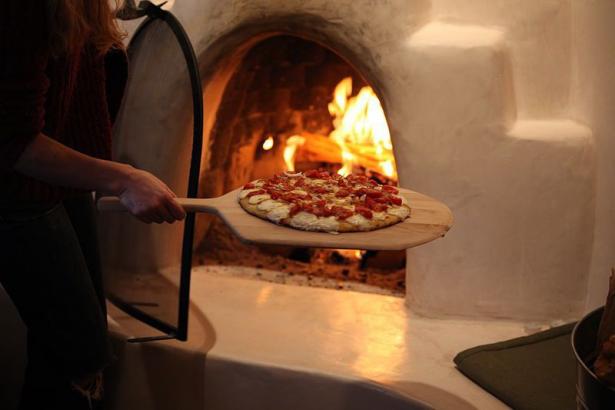 When in Rome..., Wikimedia Commons

While working in Rome, two physicists and a food anthropologist marveled at just how quickly the pizzaiolo, or man who makes pizza, could transform a disc of raw dough into the perfect Margherita pizza, with a crisp, golden brown crust topped with enticing bubbly buffalo mozzarella and savory tomato sauce.

So in true scientist fashion, they decided to analyze the secrets of the perfect pie, and even concocted a thermodynamic equation that you can use at home—if you’ve got some physics know-how, reports Brandon Specktor at LiveScience.

According to the paper in the journal IOP Science, it all comes down to the oven. Seasoned pizza makers told the researchers that only wood-fired brick ovens that produce dry heat and a whiff of woodsmoke can create the perfect crust. Modern electric ovens, they argue, just couldn’t replicate the pies. They also revealed that the oven needs to be heated to 620 to 660 degrees, which should crisp up the average pie in about two minutes. However, the pizza makers caution, during the evening rush many shops turn up the heat to make the pizzas quicker, dulling some of that perfection, causing the crust to be overdone and the tomatoes undercooked. In other words, even in Rome, not all pies are created equal.

In a series of thermodynamic equations, the researchers determined the formula for exactly how the brick oven imparts the perfect amount of heat to the pie. In general, heat is released relatively slowly from the brick, causing the crust to crisp up without burning while the toppings cook more quickly and give off some of their moisture, leading to the perfect balance.

Of course, not everyone or every restaurant can construct an authentic Roman brick oven. So, the researchers tried to convert the perfect pizza formula for an electric oven with a metal surface. Because metal conducts heat so much more quickly than ceramic bricks, cranking up the oven to over 600 degrees would simply produce a charred pie. Instead, they found that to replicate what is happening in the wood oven, the heat needs to be reduced to 450 degrees and the dough should stay in the oven for 170 seconds.

However, they suggest that pie with toppings containing a lot of water, including most vegetables, needs more time. In Rome, the study says, some pizza makers raise topping-heavy pies off the bricks for about 30 seconds using a metal or wooden pizza peel to prevent the crust from burning but allowing the toppings to cook. Pairing those oven techniques with the right dough could get you close to the Roman ‘za, but manage your expectations. The truth is, the researchers admit, it’s close to impossible to replicate brick-oven pie with electricity.

This isn’t the only formula for creating the perfect pie. Several years ago, Sheffield University mathematician Eugenia Cheng came up with an equation describing the perfect amount of toppings to put on pizza. Sammy Medina at Fast Company reports that the company Pizza Express was confused as to why it’s larger 14-inch pies were outselling it’s 11-inch pies, which are its signature product. Cheng’s formula found that the larger pies were probably just better.

A larger pizza reduces the potential for sogginess depending how evenly its toppings are distributed and the thinner and crispier its crust. Smaller pies tended to have the toppings crammed into the middle with fewer towards the edges, meaning fewer bites with your favorite toppings.

Even if thermodynamics can incrementally improve pizza, it’s unlikely many Americans will cash in their beloved pepperoni slices for a mathematically perfect Margherita. Pizza lovers are hard-core supporters of their regional styles, including the floppy New York-style slice, the cake-thick Chicago pizza, New Haven’s coal-fired clam pies, St. Louis cracker crusts and California’s veggie-covered slices. And that’s not counting all the national chains and local joints that have their own rabid followings.

Perhaps, the only math American pizza lovers are interested in is figuring out how much to tip the delivery guy.

Read more: https://www.smithsonianmag.com/smart-news/physicist-work-out-equation-cooking-best-pizza-pie-180970749/#3pttyR6TiURm7vZw.99 Give the gift of Smithsonian magazine for only $12! http://bit.ly/1cGUiGv Follow us: @SmithsonianMag on Twitter