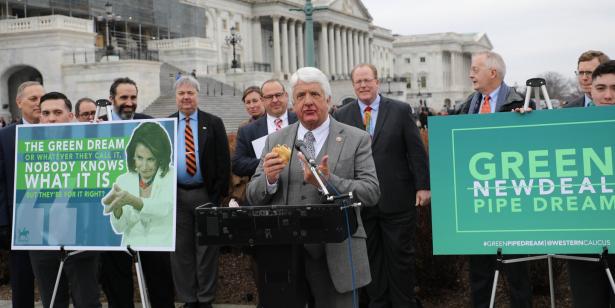 FOR YEARS, THE terms of the debate about climate change in the United States have been clear. One side — flush with fossil fuel cash — cast doubt on whether the problem existed at all, spreading disinformation and calling global warming an elaborate hoax to bring about socialism. For the most part, they were Republicans. On the other side were those who believed the science and usually rallied around some call for climate action, however vague. The conversation around the Green New Deal has brought those sides together, as politicians on both sides of the aisle scramble to cobble together a third way.

That Republicans being paid by the fossil fuel industry have come out against a plan for the United States to reach net-zero greenhouse gas emissions by 2030 is hardly surprising. That they’re being joined by prominent Democrats in casting doubt on the idea is a signal for how old tribalisms around climate change are starting to radically shift.

“The Anti-Green New Deal Coalition,” a new report from the Public Accountability Initiative, or PAI, attempts to map these evolving allegiances.

Unsurprisingly, a common bipartisan thread in Green New Deal opposition is fossil fuel donations. Raking in 81 percent of all oil and gas donations since 1990, today’s GOP “operates as a de facto wing of the fossil fuel industry,” the report’s authors write. The exclusively white, male, and Republican leadership of the Congressional Western Caucus is a prime example. In the last election cycle, it accepted $837,480 from political action committees linked to the energy and natural resources industry, a fraction of the $4.3 million that same group has taken in from fossil fuel PACs over the course of its career. On Wednesday, the caucus hosted a “policy forum” on the Green New Deal — a “Green Pipe Dream,” as they call it — flanked by a who’s who of the country’s most prominent climate deniers, including the Competitive Enterprise Institute’s Myron Ebell to ClimateDepot founder Marc Morano. Ceremoniously, Rep. Rob Bishop, R-Utah, ate a hamburger.

Yet Democrats — and those ambivalent or hostile to the Green New Deal, in particular — have accepted their share of coal, oil, and gas money too. Joe Manchin, D-W.Va., is a longtime supporter of fossil fuel interests, which have donated prolifically to his campaigns over the years. Rep. Frank Pallone, D-N.J. — who was instrumental in killing Rep. Alexandria Ocasio-Cortez’s resolution to create a Select Committee on the Green New Deal — has taken in hundreds of thousands of dollars from polluting industries. (Pallone chairs the House Energy and Commerce Committee, and many credited territorial concerns for his opposition to the creation of a select committee.)

House Speaker Nancy Pelosi — who famously called the Green New Deal the “green dream or whatever” — is also backed by the fossil fuel industry. E&E News found that Pelosi and four of her top allies have collected $790,000 from fossil fuel interests, and that either they or their spouses have “tens of thousands of dollars invested in a fossil-fuel-powered electric utility, a natural gas infrastructure company and several funds with significant fossil fuel assets.”

So far, 89 House and 11 Senate Democrats have signed on to the Green New Deal resolution, introduced by Ocasio-Cortez and Sen. Ed Markey earlier this month, which leaves many still on the sidelines. HuffPost’s Alex Kaufman calculated that senators opposed to the Green New Deal accepted an average of seven times more money in donations from fossil fuel companies than the resolution’s co-sponsors.

“With this report, we’re not trying to dogmatically condemn different people,” report co-author Derek Seidman told me. “You have on the one end, a very powerful part of this coalition that wants to completely crush the Green New Deal, and that’s the fossil fuel industry and the Republican Party,” Seidman says. In the middle, he adds, are individuals and organizations with “real and professed commitments to doing something about the climate crisis. But [the Green New Deal] is in tension with their economic and policy ideology, their donor bases, or the gradualist, incrementalist ways in which they’re used to doing politics, which you see now really contrasted with people like Ocasio-Cortez.”

THE REPORT INCLUDES examples of some surprising people and groups who are committed to fighting climate change — to an extent. Sen. Sheldon Whitehouse, D-R.I., for example, is a vocal climate hawk who’s nonetheless been cool to calls for a Green New Deal. A few Republicans, including GOP Reps. Brian Fitzpatrick and Francis Rooney, have broken ranks to support policies like a carbon tax and acknowledge the reality of global warming, but none have crossed the aisle for a Green New Deal.

Business-friendly environmental groups like the Environmental Defense Fund and Natural Resource Defense Council — which share ties to the oil and gas industry — are also included in the PAI report, though both have issued vaguely worded statements in support of the Green New Deal.

There are also those, Seidman told me, “trying to dilute the Green New Deal and make it into something that’s more aligned with the status quo or moving a little more slowly.” The Washington Post editorial board’s self-styled proposal for a Green New Deal-but-not, which leans heavily on market-based mechanisms like carbon pricing, is an example of that.

The editorial board joins a growing number of establishment economists backing a modest carbon tax as an explicit alternative to the Green New Deal, namely in the form of a proposal brought by former Bush and Reagan-era cabinet officials. That plan — brought by the Climate Leadership Council, or CLC — has received the hearty support of fossil fuel companies, who are among its founding sponsors. The lobbying arm for the CLC plan is a group called Americans for Carbon Dividends, which is led by former Republican senators and current Squire Patton Boggs lobbyists Trent Lott and John Breaux, bolstered by $1 million in support from Exxon Mobil. Joe Crowley, who lost his primary fight to Ocasio-Cortez last June, recently joined Lott and Breaux on Squire Patton Boggs’s public policy arm as a lobbyist.

Matthew Miles Goodrich, New York state director for the Sunrise Movement — one of the key groups pushing for the Green New Deal — said his group’s approach “emphasizes the sweeping nature of the program and forces everyone to play on our turf. It makes climate denial look so untenable that it actually forces some of our staunchest opponents to support a carbon tax. It shifts the Overton window.”

As the report authors make clear, this loose new anti-Green New Deal coalition is hardly working in lockstep, and the derision cast on the proposal from the likes of the Western Caucus looks a good deal different than that coming from Pelosi and company. “Not all centrist Democrats who express objections to a bold Green New Deal are equivalent in their skepticism or opposition, and it’s possible that Green New Deal supporters could bring some closer to their camp,” they note.

To help provoke such shifts, Sunrise is working to get fossil fuel money out of politics by helping to circulate the No Fossil Fuel Money Pledge, which calls on candidates to reject donations from fossil fuel industry-linked PACs and donations from industry employees over $200. After being confronted by young activists over the weekend, in part for violating that pledge, Sen. Dianne Feinstein, D-Calif., agreed to give back donations from the oil companies Tesoro and Phillips 66.

THE REPORT NAMES other people and groups whose opposition to the Green New Deal, like that of congressional Republicans, is par for the course. Michael Bloomberg, billionaire, erstwhile Republican, and perennially rumored presidential candidate, has called the plan “pie in the sky,” despite his attempts in the last several years to cast himself as a climate hero. While he’s given amply to the Sierra Club’s fight against coal, he’s long been a supporter of natural gas and fracking as a so-called bridge fuel to renewable energy, and is himself an investor in oil and gas companies.

Another billionaire and rumored 2020 presidential hopeful, Starbucks founder Howard Schultz, has chided the Green New Deal despite trying to boost his and his company’s green credentials.

Rounding out PAI’s list is the leadership of conservative building trades unions like the Laborers’ International Union of North America, or LIUNA. The union’s top brass have long fought environmentalist efforts to stop the Keystone XL and Dakota Access pipelines, and came out explicitly this month against the Green New Deal with a statement parroting several right-wing myths about the resolution.

Unlike LIUNA, Democrats wary of the Green New Deal tend to frame their opposition as a difference of opinion over means, not ends. But none have put out an alternative plan that would accomplish the goals of the Green New Deal, for decarbonization at the speed and scale necessary to avert widespread catastrophe.

“Among Democrats, the Green New Deal has really pushed the party to grapple seriously with the U.N. report rather than ignore it or pretend it doesn’t exist, or put forward market-based solutions that won’t actually move us quickly enough over the next 10 years,” said Justice Democrats Communications Director Waleed Shahid, referring to last fall’s report from the Intergovernmental Panel on Climate Change about what it would take to keep warming below catastrophic levels.

There may be no issue that lends itself better to a “which side are you on”-style politics than the climate crisis — that is, do we do everything necessary to avoid the worst or not? Scientists rarely stutter about the scale of change needed, which many have likened to the Allies’ economy-wide mobilization for World War II. In the eleventh hour to preserve a habitable planet, simply believing climate change is real isn’t enough.

Become a Member of The Intercept
Protecting freedom of the press has never been more important. Support The Intercept's independent journalism by becoming a member today.