Means TV, With a Boost From the Nyan Cat, Launches a Post-Capitalist Streaming Service 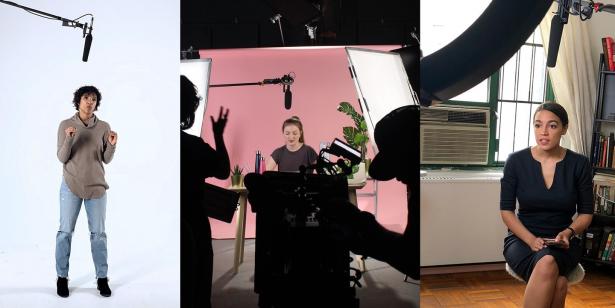 THE WORKING-CLASS filmmakers behind Rep. Alexandria Ocasio-Cortez’s viral campaign video are launching their next challenge to capitalist hegemony, Means TV. The socialist streaming service has an internet sensation behind its launch: Nyan Cat.

Launched Thursday morning, Means TV plans to bring a leftist lens to news and entertainment in the burgeoning subscription video-on-demand industry. “Basically, it’s a cooperatively-run, anti-capitalist Netflix,” said co-founder Naomi Burton, the goal of which is “to help create the cultural foundation and support needed to build socialism in the U.S.”

In a spirit of anarcho-syndicalism, a friend of the founders handed over the reins to the YouTube page that published the original Nyan Cat video in 2011. The meme has since been viewed more than 165 million times, for no reason that would be obvious to most people, let alone executives at corporate news and entertainment conglomerates.  But the virality of the Nyan Cat video means that YouTube’s algorithm recommends it routinely to viewers, drawing thousands of new subscribers to the channel each month.

Because of that, Means TV launched with more than 125,000 subscribers, the kind of number that a new streaming service would easily pay six figures to purchase.

Burton and co-founder Nick Hayes think that the corporate dominance of the entertainment space leaves captivating worker-centric stories untold, and that Means TV can fill the void. The YouTube channel will serve to drive viewers to the subscription service, which will go live next week. In the meantime, the founders, who launched their introduction video on Thursday, are seeking donors to crowdfund the effort, which will include animated comedy, scripted programs, reality TV shows, news from the field, and political explainers.

Means TV’s founders have a second rationale for publishing on YouTube: to battle the “alt-right” on what has become its turf. White nationalists and the “alt-right” have come to dominate the political space on YouTube, exploiting the platform’s nihilistic algorithm with the aim to radicalizeyoung, disaffected boys, curdling their adolescent anxiety into misogyny, then racism, then full-blown white supremacy.

“We wanted to start fighting the YouTube war with this. We’re tired of watching as Midwestern 12-year-olds get sucked into the ‘alt-right,’” said Hayes, noting that the “alt-right” dominance of the algorithm is so strong that it recommends one of the more potently toxic trolls even to Hayes, “I get Jordan Peterson videos recommended to me.” Peterson, an eccentric Canadian author and psychologist, has just under 2 million subscribers.

Means TV will need all the help from the Nyan Cat it can get, as it’s entering an increasingly crowded space. It comes on the heels of the launch of OVID, a collective of eight independent film distributors pooling resources to provide access to thousands of films and documentaries not available on other streaming services. OVID’s featured offering out of the gate is a six-part series called “Capitalism.”

Corporate giants are also surging into the space currently dominated by Netflix, Amazon, HBO, and Hulu, the latter a joint venture with the Walt Disney Company, which owns 60 percent of the company, as well as Comcast and AT&T.  New services by Apple, Disney (which recently purchased Fox Entertainment), AT&T (which purchased Time Warner), and NBCUniversal are expected in 2019 or next year. Smaller, well-financed players like CuriosityStream.com, CriterionChannel.com, and Gravitas Movies keep joining the market. And then there’s Snap Originals, Pluto TV’s recently announced expansion, Quibi, and the Young Turks, which has more than 4 million subscribers on YouTube (and where I’m a contributor).

Means of Production, Burton and Hayes’s production company, first landed in the national spotlight last summer for its work for Ocasio-Cortez’s congressional campaign. Burton first reached out to Ocasio-Cortez early in 2018, impressed by her working-class campaign and willingness to run on democratic socialist themes, and asked if the campaign was working on a video element. Ocasio-Cortez told her that the cash-strapped campaign hadn’t been able to find anybody who could produce what they needed at the price they could afford. Working cheaply, Means of Production quickly turned around the ad that has been credited with helping turn the race around.

The Means TV concept has been in the works for some time, Burton said, and she recalled discussing it at length with Ocasio-Cortez when she was still a long-shot candidate, with both recognizing the importance of programming that centered working-class struggles and highlighting the nature of capitalist exploitation in a fun and relatable way.

“We want to emulate what is most popular,” said Hayes, but do it with a different focus. “‘Rick and Morty’ but about a tech CEO trying to colonize another planet.”

Get The Intercept Newsletter

Means TV has a number of treatments and pitches ready to move to production if the funding can come through, Burton said, drawing on a broad range of talent. Producers at corporate networks have reached out, she said, frustrated by the narrow range of content they can produce, as have international producers and documentarians, who’ve run into their own political walls. Add to that a burgeoning younger generation of filmmakers who haven’t broken in, or are uninterested in corporate work, and Burton said there’s no shortage of talented people ready to produce. The company will be cooperatively owned, with profits distributed to workers, who would also have a vote in how the company is run and what kind of material it produces.

“‘The Simpsons,’” Burton offered as an example, “but they’re living on an anarchist commune after the fall of capitalism. They’re just picking up the pieces and running into shenanigan with other anarchist cells.” They’re also considering a reality TV show following a workplace trying to unionize, she said.

The culture needs to shift before a post-capitalist world can be brought into being, Hayes said, and Means TV plans to be part of that. “We can’t ask working people to go revolt tomorrow,” he said. “To us, this is the first step of getting people to realize some of the ways they’re exploited and getting people to laugh about it because we’re so fucked.”

It’s also a way for leftists to compete with liberals and conservatives in spaces they’re currently being outmatched. “The structures that the right already has, and the libs already have, we deserve,” Burton said.