Though the Obama administration initially dithered while for-profit colleges preyed on students, eventually it did crack down on the sector. Not so under DeVos. 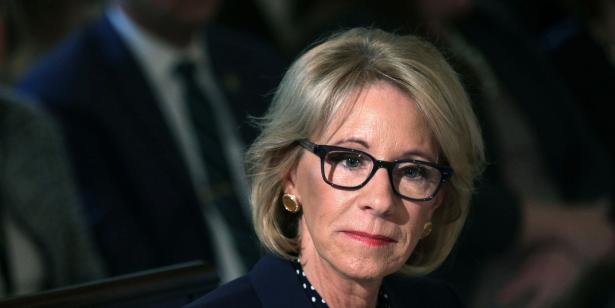 Betsy DeVos’s Education Department quietly dropped requirements for risky for-profit colleges to set aside funds in case the schools closed, according to documents from a lawsuit filed last year. Two of the for-profit networks subsequently shut down without owing the Education Department any money; in one case, the department actually gave $10 million back to a for-profit on the brink of bankruptcy.

Not only did this deprive taxpayers an offset to costs associated with refunding loans, but it also extended the life of the for-profit colleges, allowing them to enroll more students into a doomed enterprise that wasted time, money, and effort, and delivered them nothing of value.

That mirrors a persistent theme of DeVos’s leadership. Though the Obama administration initially dithered while for-profit colleges preyed on students, eventually it did crack down on the sector. Not so under DeVos.

Her top assistant Robert Eitel, previously a vice president at for-profit networks Bridgepoint and Career Education Corp, led the effort to block a rule making it easier for students to file for debt relief on loans when colleges defraud them. Head of student enforcement Julian Schmoke was a former dean at for-profit college DeVry, and during his tenure, a special team at the agency investigating for-profit abuses was disbanded. The agency has delayed tens of thousands of debt relief claims, and last October, it eliminated the “gainful employment” rule that would have forced for-profits to prove that students received decent-paying jobs after graduation. DeVos also reinstated a college accreditor that was terminated under the Obama administration for lax oversight of for-profits, despite her own career staffers determining that the accreditor was deficient.

Now, DeVos’s reluctance to seek insurance against for-profit college failures effectively kept a predatory group of schools on life support. “It’s indicative of the coziness between politicals at the Education Department and the for-profit industry,” said Clare McCann, a former senior policy adviser to the Education Department under President Barack Obama, now with the New America Foundation.

At issue are letters of credit, documents provided by an institution’s lenders that guarantee payment. Under current federal regulations, all schools that participate in student aid programs must undergo a financial audit. Through a complicated calculation of a college’s solvency, each school gets a financial responsibility score. Those with a failing grade must provide the Education Department with a letter of credit.

This acts as an insurance policy for the government. When a school closes, students can apply for a discharge to cancel their loans, depriving the Education Department, which issues the loans, of expected revenue. The letter of credit covers some of those losses.

The Education Department’s rules are fairly weak. Failing schools can either post a letter of credit equal to 50 percent of the total federal financial aid paid out in the last calendar year, or secure provisional certification through a letter of credit worth at least 10 percent of that figure. Not surprisingly, schools opt for the latter. Provisional status takes away some due process rights, making it easier for the Education Department to close failing schools — “It’s like being on probation,” said McCann — but it keeps student aid flowing at a drastically reduced cost.

It’s not entirely clear how much these letters of credit cost colleges, but Aaron Ament, president of the National Student Legal Defense Network, believes that it’s substantial. “Typically, [a bank] requires the institution to post 100 percent collateral,” Ament said.

The vast majority of schools at risk of closure belong to for-profit college networks. Over the past decade, more than 700 individual for-profit college campuses have shut down, compared to around 100 private nonprofit or public colleges. That adds up to nearly 40 percent of all for-profits in America vanishing since 2010, including closures of Corinthian Colleges and ITT Tech, two of the biggest networks. For-profit colleges soared amid the pain of the recession, but imploded amid persistent complaints of deceptive enrollments, gouging of students, and worthless diplomas.

Several remaining for-profits are teetering. The Education Department has discretion to require a letter of credit whenever they determine a risk to the taxpayer, like during a change in ownership and control of the institution, which happens often as for-profits sell their stakes to keep the lights on.

According to the most recent information, in the final year of the Obama administration, the Education Department held $937 million in letters of credit. But there is no up-to-date record of which colleges have supplied one. That’s the subject of a lawsuit involving the Freedom of Information Act, which the National Student Legal Defense Network filed in U.S. district court in Washington last summer.

Initially, the Education Department said it would take two years to track down all the letters of credit, and committed only to an ongoing two-year lag for all updates. The National Student Legal Defense Network subsequently asked for the status of five for-profit college networks known to be in financial risk. In November, the Education Department disclosed that it did not hold a letter of credit on any of the five.

A screenshot from a document filed Nov. 19, 2018, as part of the lawsuit National Student Legal Defense Network v. United States Department of Education.

For-profit networks without a letter of credit include: InfiLaw, a collection of law schools that have been closing, with the last surviving one converting to nonprofit status; Career Education Corporation, which has been forced by state regulators to forgive $500 million in student debt after accusations that it misled students about low job placement rates; and Bridgepoint, which is facing numerous investigations over similar deceptions.

Without a letter of credit, these schools need not guarantee hundreds of millions of dollars to the Education Department, allowing them to limp along, enrolling students in programs more likely to saddle them with massive debt than kickstart a career. “You’re talking about thousands of people’s lives we know are going to be ruined, and for what?” said Seth Frotman, the former student loan ombudsman for the Consumer Financial Protection Bureau who now runs the Student Borrower Protection Center.

The cases of Education Corporation of America and the Dream Center are the most egregious. Both networks are now closed, and the Education Department allowed prior letters of credit to expire, leaving no money to offset large losses from canceled loans.

ECA’s letter of credit expired at the end of March 2017; Ament’s team estimates that it would have been worth at least $27 million. The company managed over 70 campuses with roughly 19,000 students, but to many, their imminent demise was easy to spot. “We saw the writing on the wall for the school [last May] when it tried to change accreditation agencies and got a 50-page letter saying, ‘You are terrible,’” said Ben Miller, another former Obama-era Education Department policy adviser, now at the Center for American Progress. “It was obvious there would be problems, but the Education Department waited.”

ECA closed 26 campuses in a restructuring last September, but the Education Department didn’t ask for a letter of credit until the following month. Furthermore, it gave ECA until March 2019 to post it. The company didn’t make it that long, abruptly closing all campuses last December after its original accreditor dropped them. Students were not given time to transfer their credits to another school, a process known as a teach-out.

“When it collapsed, the Education Department had nothing,” said Ament.

The other case was even more of a head-scratcher. The Dream Center, a Christian charity with no experience in higher education, associated with a Los Angeles mega-church, acquired the failing for-profit Education Management Corporation in 2017. The 102 campuses included Argosy University, South University, and Art Institute locations.

At the time, the Dream Center only had $35 million in the bank, according to its Internal Revenue Service disclosure. “They had less money than EDMC turned in profit in a given year,” said Miller. Outside investors fronted nearly $200 million to finance EDMC’s operations, but any significant loss would put the Dream Center in financial peril.

In a similar situation in 2016, the Obama administration’s Education Department obtained a 25 percent letter of credit from Apollo Education Group when it took over the University of Phoenix. But the three older letters of credit held over from EDMC only totaled 10 percent, and the Education Department let the $104 million in guarantees expire in May 2018. In addition, no requirements for improving student outcomes were placed on the deal, unlike the University of Phoenix case.

The Education Department did convert part of one letter of credit into a cash escrow account, but then released $10 million of it back to the Dream Center to be used for salaries, retention bonuses, and payments to transferring students. “Releasing the money back to the institution seems particularly unorthodox and problematic,“ said McCann.

Dream Center’s first-year loss came to $38 million, more than it had in the bank at the end of 2017. Amid imminent evictions from its properties, Dream Center shut down 30 campuses last December. In January, a federal judge placed the Dream Center’s institutions in receivership, hoping to stave off closure. The following month, the Education Department learned that Dream Center took roughly $13 million intended for student financial aid refunds and used it to pay operating expenses, including payroll and bonuses.

In response, the Education Department cut off student loan payments, and a week later, most Dream Center campuses shut down; some were spun off to a nonprofit foundation backed by a private equity firm. Without a current letter of credit, there was nothing to offset canceled loans.

“With Dream Center, they were scraping the bottom of the barrel so much, they stole money intended for students,” said McCann. “Not requiring a letter of credit extends the life of these toxic assets.” That means more students chewed up and spit out by a system concerned more with profits than education or career placement.

DeVos’s special pleading for for-profit colleges has not forestalled their demise; the business model itself is flawed. But it has helped executives escape the carnage relatively intact. The pending reauthorization of the Higher Education Act gives Congress an opportunity to weigh in on the Education Department’s record with for-profit colleges. But the Trump administration’s blueprint for the reauthorization would further relax rules on for-profits.

Some experts believe that even if DeVos’s agency used letters of credit in a standard fashion, it would be insufficient. “Letters of credit come in as a consequence tool when things go bad,” said Miller. “It should be, once you get a lot of money from the government, we should have insurance just because.”

The Education Department has not yet responded to a request for comment.

We depend on the support of readers like you to help keep our nonprofit newsroom strong and independent. Join Us