Documents in the court docket show that the coal giant gave contributions to leading think tanks that have attacked the link between the burning of fossil fuels and climate change. 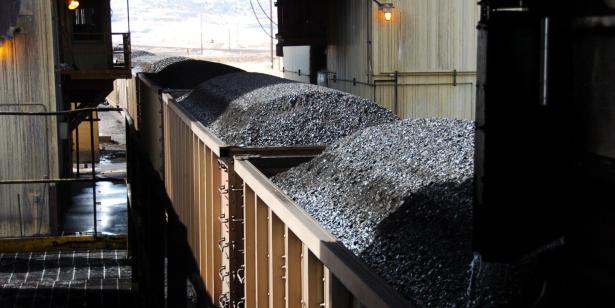 Coal is loaded onto hopper cars at Cloud Peak Energy’s Spring Creek Mine near Decker, Mont., on April 4, 2013., Matthew Brown/AP

THE BANKRUPTCY OF one of the largest domestic coal producers in the country has revealed that the company maintains financial ties to many of the leading groups that have sowed doubt over the human causes of global warming.

The disclosures are from Cloud Peak Energy, a Wyoming-based coal mining corporation that filed for Chapter 11 bankruptcy on May 10. The company had been battered by low coal prices, including in international markets cultivated by the firm.

The documents in the court docket show that the coal giant gave contributions to leading think tanks that have attacked the link between the burning of fossil fuels and climate change, as well as to several conservative advocacy groups that have attempted to undermine policies intended to shift the economy toward renewable energy. The documents do not include information on the size of the contributions, yet, taken as a whole, the list of groups Cloud Peak Energy helped fund are indicative of how the company prioritized pushing climate denialism. The company did not respond to a request for comment.

The contributions are revealed in a filing that lists recipients of grants, creditors, and contractors. The document shows that Cloud Peak Energy helped fund the Institute of Energy Research, a Washington, D.C.-based group that has dismissed the “so-called scientific consensus” on climate change and regularly criticizes investments in renewable energy as a “waste” of resources.

Several of the groups that receive funding from Cloud Peak Energy have used aggressive tactics to attempt to discredit environmentalists. The Center for Consumer Freedom, one of the groups listed in the coal company’s filing, is part of a sprawling network of front groups set up by a lobbyist named Rick Berman geared toward attacking green groups such as the Sierra Club and Food & Water Watch as dangerous radicals.

Other organizations quietly bankrolled by Cloud Peak Energy have directly shaped state policy. The company provided funding to the American Legislative Exchange Council, a group that provides template legislation to state lawmakers. The model bills promote the fossil fuel agenda. One model bill declares that there is a “great deal of scientific uncertainty” around climate change; others are designed to repeal environmental regulations on coal-burning power plants.

The Montana Policy Institute — a local libertarian think tank that promotes a discredited claim that world temperatures are falling, not rising, and questions whether humans cause climate change — also received funding from the firm.

Cloud Peak Energy, the filing shows, funded Americans for Prosperity, the Koch brothers-backed group that mobilizes political opposition to Democratic politicians and climate regulations. The mining firm also financed Crossroads GPS, a “dark-money” group that funneled millions of undisclosed dollars into Senate races in support of GOP politicians during the 2010 and 2012 election cycles. The Western Caucus Foundation, which supports congressional efforts to deregulate the mining sector and sell off public lands for energy development, received funding as well.

Many of the political dollars listed in the filing appear routine among coal industry firms. The Wyoming coal firm provided financing to an array of trade groups, including the American Coalition for Clean Coal Electricity, the National Mining Association, and the American Coal Council, that lobby legislators on mine industry priorities.

Four years ago, falling coal prices led to a series of bankruptcies of the largest coal companies in America. The filings, first reported by The Intercept, similarly revealed that the coal industry had financed a range of activists and organizations dedicated to spreading doubt about the science underpinning climate change. Alpha Natural Resources disclosures showed that the firm had quietly paid Chris Horner, an activist known for hounding climate scientists.

Many political organizations are organized as 501(c) nonprofits, an Internal Revenue Service designation that allows donors to remain anonymous. Bankruptcy filings, which force companies to open their books, provide a rare window into secret political donations.

In 2016, Greg Zimmerman, an environmental activist, stumbled upon a presentation titled “Survival Is Victory: Lessons From the Tobacco Wars.” The slide deck was the creation of Richard Reavey, a vice president for government and public affairs at Cloud Peak Energy, and a former executive at Phillip Morris. Reavey argued that fossil fuel firms, particularly coal, should emulate the tactics of big tobacco, which similarly spent decades battling scientists and regulators over claims that its product harmed public health.

In the New York Times coverage of the episode, Reavey told the paper that his firm “has never fought climate change — never fought it, never denied it or funded anyone who does.” The bankruptcy filing from last week, however, suggests otherwise.

Lee Fang is a journalist with a longstanding interest in how public policy is influenced by organized interest groups and money. He was the first to uncover and detail the role of the billionaire Koch brothers in financing the tea party movement. His interviews and research on the Koch brothers have been featured on HBO’s “The Newsroom,” the documentaries “Merchants of Doubt” and “Citizen Koch,” as well as in multiple media outlets. He was an investigative blogger for ThinkProgress from 2009 to 2011, and then a fellow at the Investigative Fund of the Nation Institute and contributing writer for The Nation.

In 2012, he co-founded RepublicReport.org, a blog to cover political corruption that syndicates content with TheNation.com, Salon, National Memo, BillMoyers.com, TruthOut, and other media outlets. His work has been published by VICE, The Baffler, the Boston Globe, the San Francisco Chronicle, The Progressive, NPR, In These Times, and the Huffington Post. His first book, “The Machine: A Field Guide to the Resurgent Right,” published by the New Press, explores how the conservative right rebuilt the Republican Party and its political clout in the aftermath of Barack Obama’s 2008 election victory. He is based in San Francisco.

The Intercept depends on the support of readers like you to help keep our nonprofit newsroom strong and independent. Join Us