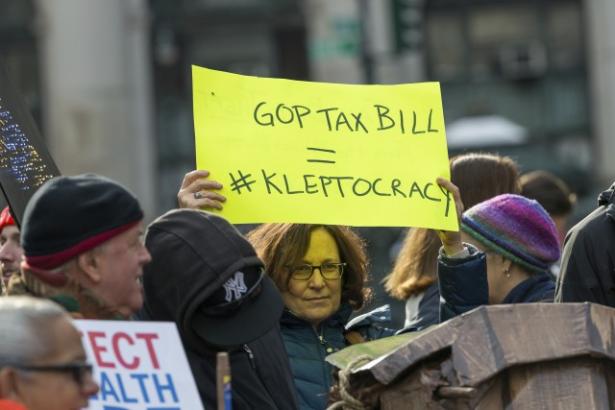 A demonstrator holds a sign at a rally in opposition to the Republican tax bill held in Lower Manhattan, Albin Lohr-Jones/Sipa USA via AP Images

The sweeping tax law Republicans enacted in late 2017 is definitely not paying for itself and has not significantly boosted the economy or increased wages, the non-partisan Congressional Research Service said in a report.

But in line with what critics cautioned, the measure triggered a wave of corporate stock buybacks that benefited investors more than anybody else, according to the new study.

“While evidence does indicate significant repurchases of shares, either from tax cuts or repatriated revenues, relatively little was directed to paying worker bonuses, which had been announced by some firms,” CRS economic policy experts Jane Gravelle and Donald Marples wrote in their report.

The research service is an in-house think tank for members of Congress, offering authoritative, non-partisan policy and economic analyses.

Shortly after President Donald Trump signed into law the Tax Cuts and Jobs Act ― which reduced corporate taxes by 40% to a 21% rate from a 35% rate ― dozens of U.S. companies announced they would give their workers bonuses. Republicans hailed those announcements as proof that workers would benefit from their giant corporate tax cut.

But it turns out that even the most generous assessment of corporate bonuses ― a conservative group counted more than $4 billion worth of the largesse ― amounted to 2% or 3% of the value of the corporate tax cut. And the law might not even deserve credit.

“Worker bonuses could also be a result of a tight labor market and attributed to the tax cut as a public relations move,” Gravelle and Marples wrote.

Another explanation for the surge in bonuses could be that companies wanted to issue extra compensation at the end of 2017, because doing so before the law took effect would allow them to deduct the pay at a rate of 35% instead of 21%.

Meanwhile, companies announced more than $1 trillion worth of stock buybacks, which inflate the value of shares by reducing their supply. Most stock is owned by the richest 10% of Americans, including corporate executives themselves whose pay is tied to stock performance.

The landmark report comes after Trump and Republicans in Congress have continued to claim that their tax cut is what spurred a roaring economy. In addition to the corporate tax cut, the law reduced federal income taxes for the vast majority of households. Though some may not have noticed the modestly lower federal income tax withholding from their paychecks, Republicans boasted that the extra take-home pay would jolt the economy. But the CRS report makes different findings.

For the first full year after the tax cut was enacted, the Gross Domestic Product — a traditional measure for economic growth — was at 2.9%, a rate only slightly better than most years of the Obama administration (and identical to the 2015 rate).

Reviewing the literature, Gravelle and Marples conclude that the tax cut only marginally contributed to economic growth.

“On the whole, the growth effects tend to show a relatively small (if any) first-year effect on the economy,” the report said.

While Gravelle and Marples are careful to note the difficulty in determining how much GDP growth eventually will result from the tax cut, the report estimates that 0.3% of GDP growth in 2018 was a result of the law.

With that level of restrained growth, the analysts say the tax law will fall well short of paying for itself ―contrary to what many Republicans have claimed.

In fact, the report estimates that GDP growth will offset 5% or less of the revenue lost as a result of the tax cuts — meaning the GOP promises that the law would pay for itself may come up 95% short.

The report also says real wage growth has not significantly increased since the tax cuts went into effect.

“Real wages grew more slowly than GDP: at 2.0% (adjusted by the GDP deflator) compared with 2.9% for overall real GDP,” the report stated.

It also said that the real wage rate for production and nonsupervisory workers grew by just 1.2% ― essentially meaning lower- and middle-wage earners saw hardly any boost to their paychecks.

“In the absence of the tax cuts, wages should grow with the economy and wage rates should grow as the capital stock grows. In addition, tight labor markets resulting from the approach to full employment should have put upward pressure on wage rates in any case,” the report said.

The report also pokes a hole in another GOP defense of the tax cuts — that they’ve led to businesses reinvesting their tax savings back into their firms.

Gravelle and Marples look at rates of capital investment before and after the tax cuts, and they conclude that it would be “premature” to say businesses are reinvesting capital any more than they already would have been.

“To date this pattern has not been observed,” they said.