From 2012 to 2018, the city in California’s Bay Area cut its annual homicides and nonfatal shootings by nearly half, according to reports. But how? 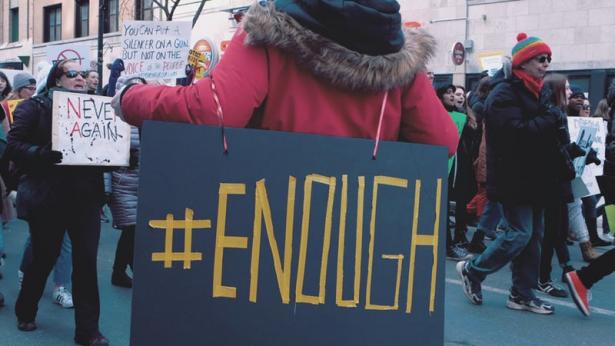 As major cities throughout the United States have struggled to deal with rising gun violence over the years, one community in California is seeing a reversal of the trend in its own backyard.

Oakland has cut its annual homicides and nonfatal shootings by nearly half since 2012, a huge drop for what used to be considered one of the more violent cities in the U.S., according to a new report by the Giffords Law Center to Prevent Gun Violence.

The reduction is no random miracle but rather an overwhelming effort made by the entire Oakland community to address some of America’s daily gun violence in a city whose communities of color also deal with intergenerational poverty, housing segregation and systemic racial oppression.

Giffords’ April 24 report, “A Case Study in Hope,” looked at how Oakland leaders used a comprehensive, rehabilitative method to tackle gun violence, reduce recidivism and heal the community. The method is a change from historically used police tactics of invasive stops and seizures, severe sentencing and measuring “success” by the number of arrests, which criminologists said do not reduce violence in communities and instead contribute to mass incarceration.

Giffords produced the study in collaboration with Faith in Action, a faith-based national community-organizing network, and the Black and Brown Gun Violence Prevention Consortium, a partnership of institutions led by people of color that work to implement strategies to reduce gun violence in affected communities.

In 2012, city leaders launched Oakland Ceasefire, a violence reduction initiative that formed an ongoing partnership between community members, social service providers and law enforcement officials. Those leaders work together to reduce violence, build trust between police and the community, and help those who are at high risk of engaging in violence.

In August 2018, lead criminologist Anthony Braga and his team of researchers released results of their Ceasefire analysis and found that the initiative is associated with an estimated 31.5% reduction in the city’s gun homicides. The city recorded 68 killings last year, Oakland’s lowest number of homicides in nearly two decades and a nearly 50% reduction from 2012, according to the report. Oakland also had a more than 50% reduction in nonfatal shootings over the same period, from 561 in 2012 to 277 in 2018.

“In Oakland, we’ve embraced the notion that we can’t arrest our way out of the gun violence epidemic,” Oakland Mayor Libby Schaaf said in a statement. “Instead, we looked at who was actually most at risk of engaging in violence, and worked together as a community to open a new door for them.”

The graph by Giffords Law Center shows where Oakland’s homicides and nonfatal shootings were at during the year of 2012, when the report’s analysis began.

Oakland, with consulting help from experts at the California Partnership for Safe Communities (CPSC), analyzed which residents were at the highest risk of participating in serious violence. The analysis’ findings in 2014 showed that just 0.1%, or about 400 people, were considered high-risk and were mostly involved in gang/group-related violence.

The analysis also debunked police assumptions that juveniles were driving most of Oakland’s violent crime. In reality, the average age of a homicide suspect was 28, with less than 10% of homicides involving anyone younger than 18.

Braga’s research also controlled for trends in Oakland, such as gentrification. The city, along with the rest of the San Francisco Bay Area, has experienced an increase in homelessness, rent prices, wealthy young people likely working in tech and businesses catering to those people, resulting in the displacement of tens of thousands of black residents over the past decade.

Almost 40% of low-income neighborhoods in Oakland are at risk of gentrification, and 55% have ongoing gentrification/displacement issues, said Anna Cash, assistant director at the Urban Displacement Project at the University of California, Berkeley.

Mike McLively, a senior attorney at Giffords and one of the report’s lead authors, said that, ultimately, gentrification “has played some role” in Oakland’s violence reduction, “but Braga’s work demonstrates that strategies like Ceasefire are having major and independent impact.”

“The neighborhoods where there’s been the largest reduction in shootings are deep East Oakland and some pockets of West Oakland,” McLively told HuffPost. “As an Oakland resident, and sort of anecdotally, I’m aware of the fact that those are the neighborhoods that have resisted gentrification the most. … So I feel like these strategies absolutely have an impact.”

While the violence reduction is attributed mostly to community-led efforts, the decrease happening amid rapid gentrification leaves the question of who gets to benefit from a safer community ― and if the reduction makes Oakland more appealing for more people to come in and further gentrify the area.

McLively acknowledged the importance of ensuring that the process of making Oakland safer is done so in an equitable way.

“I think it’s important for city leaders and policymakers to be thinking about that, that reductions in violence will make areas more attractive, frankly, to wealthier, whiter populations,” he said. “And so it’s important that there be policies in place to try to ensure that the public safety benefits that are being brought about by these programs are preserved for folks who live there now.”

Such communication included call-ins, in which Oakland residents actively involved in groups at high risk of violence are invited to listen to a mix of community members, faith leaders, law enforcement and social service providers, who assure them in a compassionate way that the community wants them to put down the guns but that police will respond if the violence continues. Invitees are connected to support networks and offered optional services that can help them stay away from violence.

Oakland Unite, a division of the city’s Human Services Department, is a network of community-based organizations that provides resources to people at high risk of becoming victims or perpetrators of violence. Those resources include intensive mentoring, economic and educational training, and assistance for victims of a variety of violence, not just gun violence. Oakland Ceasefire is a major source of client referrals for services with Oakland Unite, which approaches violence as a public health issue.

The Oakland Police Department began training in different tactics that would improve officers’ strained trust with the community. The department started by creating the Ceasefire Section, made up of officers who track shooting incidents and put out a daily intelligence summary to help the section’s “special investigation units,” which were built to correspond with historical trends in violence and Oakland gang dynamics, after the Ceasefire analysis determined most of the city’s shootings were group/gang-related.

Reforms within the department included procedural justice, a type of policing that says law enforcement should treat residents with dignity and respect in the communities they police. OPD partnered with clergy and community leaders, who helped create and teach a course to officers on Oakland’s history of policing and race.

An officer might say, ‘I’ve only been on the force three years, why do I get the heat?’ I explain they have stepped into a 50- or 100-year-old story about policing.Rev. Ben McBride

“I give them theory, but I also use the personal. I talk about my great-uncle in the South who was killed by the KKK, made up of off-duty police officers. How my father at 13 was arrested demonstrating with Martin Luther King,” the Rev. Ben McBride said in the report. “An officer might say, ‘I’ve only been on the force three years, why do I get the heat?’ I explain they have stepped into a 50- or 100-year-old story about policing.” 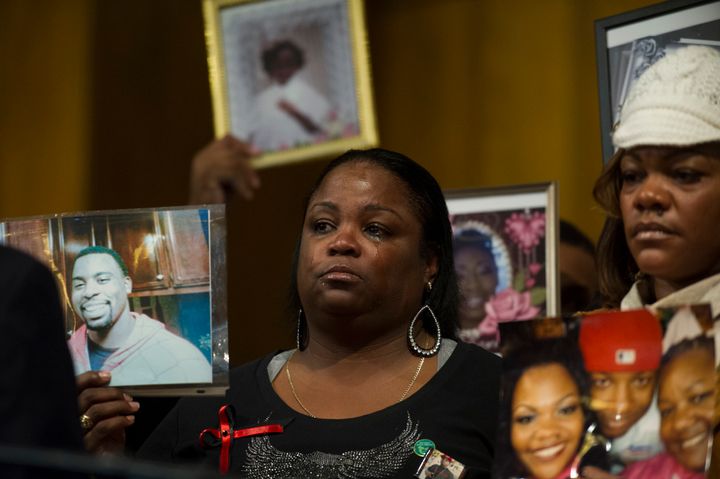 Antionette Johnson, of Oakland, California, holds a photo of her son Terrell Reams, 23, who was shot and killed in Oakland, at a 2013 meeting of groups working to prevent gun violence.  ROD LAMKEY VIA GETTY IMAGES

In 2015, the report’s data showed a sudden significant spike in homicides throughout major cities, including Oakland. McLively told HuffPost that one of the major theories criminologists have for the increase is “that in 2014 we had the uprising in Ferguson” and soon after “you have an uprising in Baltimore,” referring to protester backlash after officer-involved fatalities. That year and the following year included the high-profile police-related deaths of Michael Brown, Freddie Gray, Eric Garner, Laquan McDonald, Tamir Rice, Walter Scott and Sandra Bland. McLively said the deaths and following hostility toward protesters severed any trust built between communities and police.

Oakland Ceasefire’s community partners said in the report that they are glad progress has been made but still feel police have a long way to go to build trust with residents.

Law enforcement officials who are part of Oakland Ceasefire said they’re working to communicate regularly with community partners and city leaders to keep up with any changing patterns on violence and maintain accountability.

Ceasefire also has coordination meetings between police and Oakland Unite, in which OPD updates the service network on which groups are actively violent and which residents are especially at high risk. Oakland Unite staff stressed the importance of running parallel, but not overlapping, with police in order to maintain the trust and credibility that social service providers have earned with the community.

So how can the Ceasefire strategy that showed success in Oakland be replicated in other major cities in the U.S.? According to the report, the most foundational aspect is for cities to bring together a variety of partners, including community members, city officials and law enforcement. Community members and organizations can help with advocacy, education and maintaining political will, while the city can create a violence reduction office and provide necessary funding streams for on-the-ground resources. Police departments are urged to embrace policy changes influenced by community input, create their own unit dedicated to Ceasefire’s violence reduction strategy and begin reconciliation with the community by acknowledging the harm police have historically caused.

“Instead of blindly scaling up the law enforcement tactics that led to mass incarceration, Oakland focused on reaching those at the highest risk of becoming victims or perpetrators of violence,” said Pastor Michael McBride, Faith in Action’s director of Urban Studies, in a statement. “These young men were in need of help and healing. The partnership we formed between city leaders, social service providers, faith and community leaders, and law enforcement shows how, with the right support, those victimized by violence can forge a new path that leads them away from guns.”

Sanjana is a HuffPost reporter based in Washington, D.C. She currently covers breaking news and politics, and previously wrote for the AP in her native city Chicago. You can reach her at sanjana.karanth@huffpost.com or on Twitter at @sanjanakaranth. 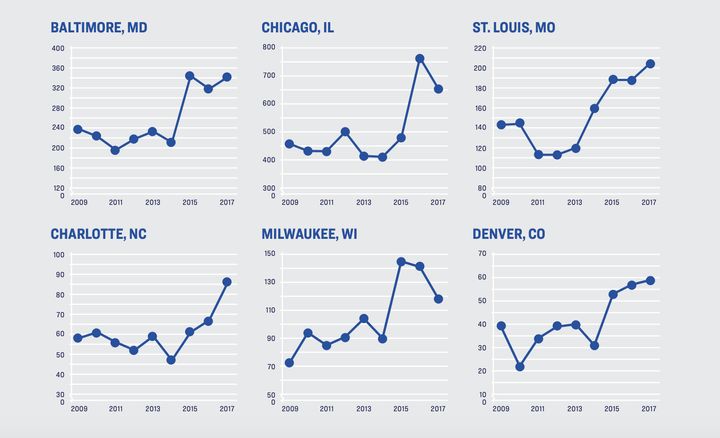 Homicides have been on the rise throughout major cities in the U.S., including the ones in these graphs. While these cities experiences an overall increase, Oakland bucked the trend.