I'm a Journalist But I Didn't Fully Realize the Terrible Power of U.S. Border Officials Until They Violated My Rights and Privacy

In retrospect, I was naive about the kind of agency CBP has become in the Trump era. 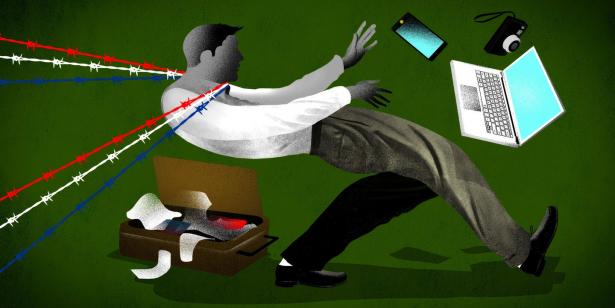 , Illustration: Brian Stauffer for The Intercept

I DIDN’T KNOW all of this when I was being held by CBP. When the officers told me they only wanted to check my devices for child pornography, links to terrorism, and so forth, I believed them. I was completely unprepared for the digital ransacking that came next.

After I gave him the password to my iPhone, Moncivias spent three hours reviewing hundreds of photos and videos and emails and calls and texts, including encrypted messages on WhatsApp, Signal, and Telegram. It was the digital equivalent of tossing someone’s house: opening cabinets, pulling out drawers, and overturning furniture in hopes of finding something — anything — illegal. He read my communications with friends, family, and loved ones. He went through my correspondence with colleagues, editors, and sources. He asked about the identities of people who have worked with me in war zones. He also went through my personal photos, which I resented. Consider everything on your phone right now. Nothing on mine was spared.

Pomeroy, meanwhile, searched my laptop. He browsed my emails and my internet history. He looked through financial spreadsheets and property records and business correspondence. He was able to see all the same photos and videos as Moncivias and then some, including photos I thought I had deleted.

At one point, Pomeroy was standing over my laptop on the desk. I couldn’t see the screen, and he had such a puzzled expression on his face that I stood up to see what he was looking at. “Get back,” he said, clapping a hand on his sidearm. “I don’t know if you’re going for my gun.” At another point, Pomeroy had taken my laptop to the desk in the waiting area, and I thought I heard him call for me to come over, so I did. “Stand back from my gun,” he said, when he saw me approaching; it turns out he had been talking to someone else. Three times during the course of the secondary screening, Pomeroy pronounced words to the effect that he was subjectively forming a reasonable belief that I might grab his service weapon.

It was an implicit death threat and a rhetorical move on part of the police that will be familiar to people of color: I’ve got a gun on you, ergo, you’re a threat to me. Speaking of which, I’m certain this whole experience would have been worse had I been black or brown instead of white. And that is to say nothing of migrants and refugees, whose treatment at the hands of CBP on the U.S.-Mexico border is another matter altogether. But it does go to show that you can’t contain a culture of aggression to one part of an armed agency.

I was being physically submissive, keeping my hands visible at all times, not making any sudden moves, but Pomeroy would not let me see the laptop screen. I told him I at least had the right to know what files he was reviewing. “All of them,” he said, giving me a hard stare. “I’m going to look at all of them.”

“Please don’t look at the one called ‘Secret ISIS Confession,’” I said.

There was a South Asian couple detained along with me, a husband and wife with their luggage. Neither of them would have been able to get away with a crack like that. In my case, Pomeroy just determined to proceed even more painfully slowly.

Both he and Moncivias spent the most time on my photos. Admittedly, I had some crazy ones, including footage of combat taken while reporting in Iraq and Syria. Likewise, my phone contained many chat logs with people in the Middle East, and even more with people in Mexico and Colombia. That could make a border agent justifiably curious, but they had made the decision to detain me and give me a hard time well before they saw the images or messages. That I turned out to be a war correspondent just gave them more ammunition to question me.

“They ask a lot of fishing questions,” said Alexandra Ellerbeck of the Committee to Protect Journalists, which has documented dozens of unwarranted interrogations of reporters by CBP in recent years. “There’s an opportunistic element to it. It seems to be targeted towards general intelligence-gathering. They take a broad view of their mandate to ask these questions, and there can be repercussions if you refuse to answer. They’ll hold you for longer, search your devices, or flag you in the future.” She added, “We don’t think this should be happening at all.”

MONCIVIAS, POMEROY, AND VILLARREAL questioned me for hours on all aspects of my work. They asked about conversations with editors and colleagues. They asked about my political opinions. Moncivias wanted to know how I felt about Trump trying to pull troops from Syria. He asked if I’d had contact with the Taliban there, and I had to explain that the Taliban don’t operate in Syria. It was clear that they weren’t after anything in particular; their questions were completely scattershot. This wasn’t a continuous interrogation, either. They were wandering in and out of the room, leaving me alone for long periods of time. Interestingly, they didn’t ask me anything about CBP itself. I had told them my current story was about gunrunning, but they didn’t think to ask if I’d done any reporting on their employer, which I had. In fact, my laptop contained hard-won documents on CBP, but I didn’t see the officers reading them.

I did see them copy my laptop’s serial number and write down three or four numbers and alphanumeric sequences found deep in my phone’s settings. The only specifier I halfway understood was the phone’s IMEI number, which can be used to track its physical location. Even if I get rid of the phone, I could be on some accursed watchlist, or somehow electronically tagged, for the rest of my life. Even if it’s benign, like those devices scientists stick whales with, I experience it as an indignity, and you probably would too. They didn’t handcuff me, but the officers otherwise acted as if I were under arrest in a police station, though I had done nothing wrong and they had no reason to suspect me of anything. They frequently took my devices out of the room for long periods of time. When I asked if they had backed up the devices or copied files, they denied it, which I found hard to believe. “You didn’t stick a thumb drive in there?” I asked Pomeroy, who was walking around carrying my laptop. He pretended not to hear.

Around the three-hour mark, I became completely passive. Confinement in a blank room is a soft form of torture, especially if you suffer from a crippling caffeine addiction, as I do. They were “fresh out” when I demeaned myself by meekly requesting coffee. For a long time, I sat slumped in the chair with a mounting headache while Moncivias finished typing up his report on me. He would pause, carefully consult something on my phone, and then go back to typing. This went on for another hour.

It was around 4 p.m. when Moncivias finally finished up and informed me, anticlimactically, that I was free to go. I couldn’t wait to get outside because the detention area was freezing. No wonder Spanish-speaking migrants call CBP detention la hielera — the icebox. I took my phone and laptop and silently packed up my luggage, which still lay disemboweled on the desk, underwear and all. Pomeroy was gone by this time. As I was walking out, I said to Moncivias and Villarreal, “It’s funny, of all the countries I’ve been to, the border guards have never treated me worse than here, in the one country I’m a citizen of, in the town where I was born.”

“Welcome back to the USA,” Moncivias said.

After publication, The Intercept learned that a CBP supervisor was incorrect when he told a reporter that a U.S. citizen may be forbidden from entering the country for refusing to answer a CBP officer’s questions. The piece has been updated to clarify that CBP does not have the power to stop American citizens from entering the U.S.

Seth Harp is a contributing editor at Rolling Stone. He covers armed conflict and the military, and has also written for The New York Times, The New Yorker, and Columbia Journalism Review.