The Smoked Paprika Museum in Spain Honors a Family Tradition

In Extremadura, entire families participate in harvesting peppers and making smoked paprika. A museum in Jaraiz de la Vera honors the Hernández family and others in the region who have been instrumental in the production of the spice. 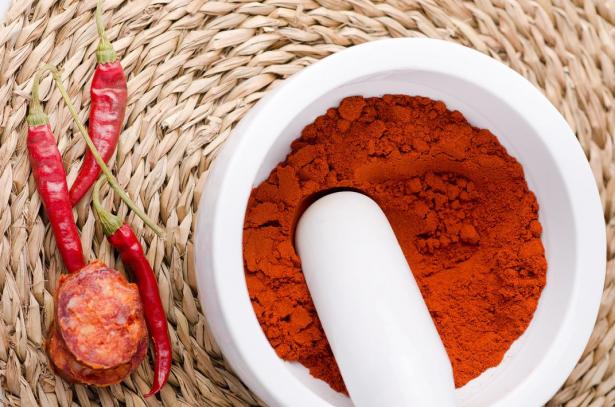 When Christopher Columbus returned from his second voyage to the New World in 1496, he brought a special gift to Ferdinand and Isabella, the royals who financed his journeys: paprika. Well, to be more accurate, he brought them capsicum peppers, the ingredient used to make paprika. He brought them from South America, and although (legend says) Ferdinand and Isabella thought them a bit too spicy, the duo handed them over to the monks at two monasteries—the Monastery of Yuste and the Monastery of Santa María de Guadalupe—who began to cultivate them in the 16th century. Families living near these monasteries in Extremadura, Spain, began to grow the peppers about the same time, drying the vegetables in smokehouses on wooden racks to create a smoky, colorful spice that took the country by storm.

Today, smoked paprika is still made in Extremadura, a region in western Spain bordering Portugal, near the original monastery where Columbus presented it. Historically, the spice was produced by family businesses, and it's still largely this way today. Álvaro Hernández Nieto is the fourth generation in his family to run a smoked paprika company: Pimentón La Dalia. Hernández’s great-grandfather, Valeriano Hernández Martín, founded La Dalia in 1913, naming it after the flower he presented to his future wife when he proposed.

Some of La Dalia's original paprika canisters are on display at the Smoked Paprika Museum in Jaraíz de la Vera. The museum, which opened in 2007 in a 17th-century brick row house, honors the Hernández family and others in the region who have been instrumental in the production of the spice. Three floors of exhibits describe the history and process of making smoked paprika, through antique production tools, recipes and videos, to more than 11,000 people who visit annually.

“Valeriano was a pioneer and a visionary,” says Hernández, speaking of how his great-grandfather helped promote the commercialization of Spanish smoked paprika. He began La Dalia as soon as he possibly could—it was one of the first factories in the area. “He originally bought the paprika from small farmers who ground the dried peppers in water mills of the many gorges that bathe the area. Then, on horseback, he would carry it to every corner, in the markets of the towns of the province.”

La Dalia is a member of the Pimentón de la Vera Co-op, a group of 17 brands and family-owned businesses creating Protected Designation of Origin-certified smoked paprika in Spain. The La Vera region of Spain, in the Cáceres province in Extremadura, is the ideal place to produce this type of paprika, thanks to its subtropical climate, salt-free water and soil with high organic matter content. Planting begins in May and June, and the ripe red peppers are harvested in September and October. Then the smoking begins.

“Smoking is done in the traditional La Vera style, dehydrating the mature fruit in a smokehouse with oak firewood,” Hernández says. “This process must be slow, with a duration of about 15 days, to ensure a maximum moisture content of 15 percent at the end of drying. Drying the peppers this way gives the product a light smoky flavor, an unmistakable aroma, and a color stability that doesn’t deteriorate in cured sausages with the passage of time.”

Once dry, the stems are removed and the peppers are ground in a mill. Workers have to ensure the peppers don’t get any hotter than about 120 degrees Fahrenheit during this whole process, or else the smokiness, taste, color and scent of the paprika will be ruined. The ground powder is then quality-certified according to Protected Designation of Origin guidelines (ensuring it was made in the traditional way), packaged and shipped out for sale.

The resulting product is an intense red powder with a delicate wood-smoked scent and flavor. And the paprika specific to La Vera actually has antioxidant properties—a study published in the Journal of Food found that these properties are specific to this paprika because of the drying and smoking process.

“The firewood-smoked drying is a consequence of the rainy autumns of La Vera, because it was impossible for the peppers to dry in the sun,” Hernández says. “The smoke drying system makes La Vera paprika unique around the world. It gives it an aroma and flavor so extraordinary that today’s best chefs call it the ‘Red Gold of Vera.’”

Jennifer Billock is an award-winning writer, bestselling author, and editor. She is currently dreaming of an around-the-world trip with her Boston terrier. Check out her website at jenniferbillock.com.