Republicans made excuses for Trump ― they spent a sizable part of Tuesday afternoon chastising Democrats on the House floor for calling the president’s statement “racist” White lawmakers acknowledged people assumed they were American. 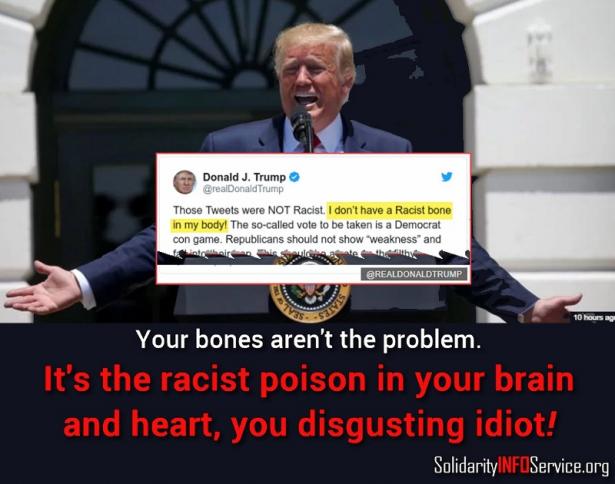 #realDonaldTrump says, "I don't have a #racistbone in my body." He obviously flunked anatomy. It's the racist poison in his brain and heart that's the problem., credit: SolidarityINFOService https://solidarityinfoservice.org/

President Donald Trump insists he wasn’t being racist when he told four minority congresswomen who’ve had the audacity to criticize him to “go back” to the countries from which they came.

Three of the four Democratic lawmakers were born in this country, and the other came from Somalia when she was 12 years old. All of them are U.S. citizens.

“Those Tweets were NOT Racist. I don’t have a Racist bone in my body!” Trump insisted on Tuesday.

Those tweets were indeed racist. Almost all people of color have stories to tell about being perceived to be an “other,” someone who isn’t really American.

HuffPost spoke with dozens of members of Congress on Tuesday about whether someone has ever told them what Trump told Reps. Ayanna Pressley (Mass.), Alexandria Ocasio-Cortez (N.Y.), Ilhan Omar (Minn.) and Rashida Tlaib (Mich.).

“I’ve been told many times to ‘go back to China,’ even though I’m of Japanese descent, because people are prone to stereotypes,” Rep. Mark Takano (D-Calif.) said. “Asian Americans, among other minority groups, often experience the feeling that they don’t belong in this country.”

“Way, way back when, somebody yelled that. Not lately,” said Sen. Mazie Hirono (D-Hawaii). “However, the president seems to be resurrecting that.”

Rep. Ruben Gallego (D-Ariz.) remembers hearing the taunt throughout his life, starting when he was a young boy.

“The kids that were saying that to me in high school weren’t just mad that I was Latino; they were mad that I was a Latino, bright student that was doing better than they were,” said Gallego, who attended Harvard. “They didn’t really have a problem with some of the other Latino students that were not great students.”

Rep. John Lewis (D-Ga.) said he often had people make similar remarks to him at the height of the civil rights movement.

“People said ‘Go back, go back where you came from,’” Lewis said.

Some Republican members said they have heard the slur as well. Sen. Ted Cruz (R-Texas), who is of Cuban descent, said he gets it from “lefties on Twitter every day.” The senator was born in Calgary, Canada, a fact Trump used during the 2016 presidential campaign to question Cruz’s eligibility to run for president.

“I’ve had a gazillion things happen to me. I’ve had a gazillion things said to me,” added Rep. Mario Díaz-Balart (R-Fla.), who is also of Cuban descent. He refused to characterize Trump’s tweets as racist, however, saying, “We throw this racist thing around so easily, and I think it’s grossly irresponsible to just throw it out there. A statement does not make one racist.”

While Republicans generally made excuses for Trump ― they spent a sizable part of Tuesday afternoon chastising Democrats on the House floor for calling the president’s statement “racist” ― Palestinian American Rep. Justin Amash (Mich.), who just left the Republican Party, tweeted that he faces similar hatred from people telling him to go back to his country or go back to the terrorist group ISIS.

Here are some of the Independence Day greetings I received this year. This happens every day to American-born citizens like me and to naturalized citizens. President Trump motivates and encourages this xenophobia. It has gotten exponentially worse since 2015. pic.twitter.com/1Sylxx6Aey

White lawmakers, not surprisingly, said they hadn’t faced assumptions throughout their lives that they were from another country. Some of their responses:

In other words, Trump’s comment was something that nearly every minority member of Congress has heard and nearly every white member has not. Yet somehow, he insists it wasn’t racist.

Many white lawmakers, however, said they knew that their parents had heard similar “go home” slurs when they were younger. Immigrants from Ireland, Germany, Italy and other European countries ― once considered part of the “other” ― did face these taunts.

“I know my grandparents who immigrated from Italy heard that when they came here. ... My father as a youngster, in his early teens, had to go to work and support the family. And my grandfather [worked] as a stonecutter. Faced signs, ‘No Irish need apply.’ ‘No Catholic need apply,’” said Sen. Patrick Leahy (D-Vt.).

Sen. Sherrod Brown (D-Ohio) said the fact that so many people have either personally been told they aren’t welcome in America or have family members who faced those comments makes Trump’s words so repugnant.

“This may be the worst thing he’s said. It’s just despicable,” Brown said. “It makes so many people flinch because they’ve been told it ― or maybe more likely, their parents or grandparents.”

“I’ve had a couple incidents of someone saying that. I’ve had far, far more incidents of people saying you can do anything you want in this country,” reflected Rep. Ro Khanna (D-Calif.). “You can go make as much of a contribution.”

“And the sad thing about the president’s divisiveness is he’s focused the attention on a very small part of American’s story. The vast majority of the American people, in my experience, are kind, are decent, have an aspirational vision for immigration. And that story is not being told.”

[Amanda Terkel is the Washington Bureau Chief, HuffPost. Alexis Arnold is a Politics Fellow with HuffPost.