Pushing out the Border: How the U.S. Is Waging a Global War on Migration

Journalist Todd Miller's new book, “Empire of Borders: The Expansion of the U.S. Border Around the World” documents how these systems exist to ensure “open borders for the elite and a caste system for everyone else.” 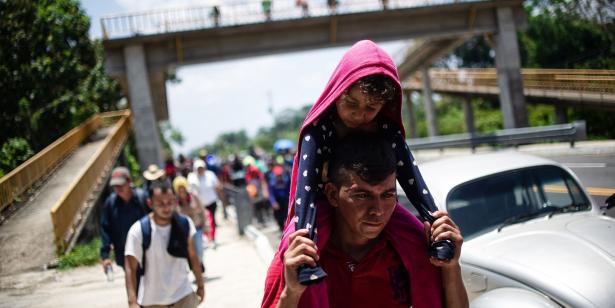 Central American migrants, part of a caravan to the U.S., walk beside the road between Metapa and Tapachula in Mexico on April 12, 2019., Pep Companys/AFP/Getty Images

A PRINCIPAL GOAL of the Trump administration’s policy at the U.S.-Mexico border —and in Central America, considered of late only in relation to that border — has been to get other governments to handle the increase in migrants seeking to enter the United States.

This means getting Mexico to send troops to its border with the U.S.; to enforce the system of “metering,” which limits the number of asylum-seekers who may approach a U.S. port of entry each day; to surveil caravans; and to deport more non-Mexicans than the United States does. It means sending Mexican forces to the border with Guatemala — and ignoring those forces’ record of human rights abuses, particularly of migrants.

It means promoting the fiction that Mexico and Guatemala have the capacity and responsibility to process large numbers of asylum claims from people fleeing violence and persecution in other parts of the world; declaring Guatemala “safe” for U.S.-bound refugees; making vulnerable asylum-seekers wait in some of Mexico’s most dangerous cities before their case can be heard in the U.S.; and, this summer, adopting an unprecedented policy that declares anyone who arrives at the U.S.-Mexico border via another country ineligible for asylum if they did not first ask for protection in that country.

Another way to describe these efforts is what the U.S. security establishment has long referred to as “pushing out the border.” It’s not a project that’s new to the Trump administration, and it’s not one that’s unique to the United States, as journalist Todd Miller expounds in his latest book, “Empire of Borders: The Expansion of the U.S. Border Around the World.” 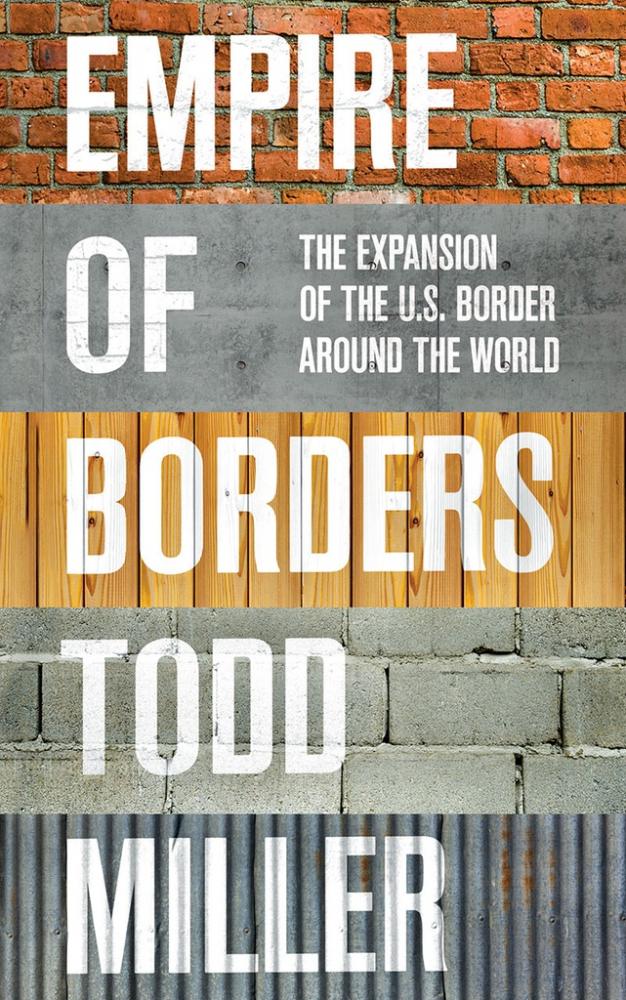 Just as the U.S. border appears more porous and arbitrary in reality than it looks on a map, the border between Mexico and Guatemala, not to mention the one between Guatemala and Honduras, defies attempts at closure. But that isn’t for lack of trying: Hundreds of millions in U.S. funds, training, and equipment have flowed to Central American borders in an effort to turn them into U.S.-style defensible zones and sources of biometrics. The buildup began in 2008 with the Mérida Initiative, a massive security assistance project to Mexico, and with the parallel Central American Regional Security Initiative. It was continued by Programa Frontera Sur, the Obama administration’s attempt to beef up Mexico’s southern border after record numbers of unaccompanied children tried to reach the U.S. in 2014. That was the year in which Mexico’s then-interior minister summed up his job as, “Who doesn’t have the necessary documents to enter into our country and enter the United States, we can’t allow them into our territory.”

A bewildering number of acronyms comprise the U.S. border apparatus that reaches around the world: from BORTAC, an elite, Special Forces-style unit of the Border Patrol, deployed to Iraq to train local forces, to EXBS, the State Department’s Export Control and Related Border Security Program. According to Miller, U.S. Customs and Border Protection “has trained new patrol and homeland security units for Kenyan, Tanzanian and Ugandan borders,” and the U.S. Department of Homeland Security can be found assisting border projects in the Philippines, the Dominican Republic, India, Poland, Turkey, and Vietnam. The Border Patrol has multiple offices in Canada and Mexico. A posting in Puerto Rico gives the agency sway in the Caribbean. Soldiers and police from around the world are flown to the Southwest region of the U.S. to learn; in Guatemala, Israel, and Jordan, Miller meets officials who know tiny Arizona towns.

“Hundreds of millions in U.S. funds have flowed to Central American borders to turn them into U.S.-style defensible zones.”

Consider the border between Guatemala and Honduras. There, the U.S. has sponsored border task forces named, ironically, for indigenous groups, who for decades have suffered human rights abuses at the hands of U.S.-trained forces in both countries. Miller visits the Guatemalan Chortí Task Force, which was stood up with $13.4 million from U.S. Southern Command in 2015 and received training in communications, intelligence, firearms, setting up checkpoints, and looking for tracks of migrants on foot. On patrol with their Honduran counterpart, the Maya Chortí, Miller gets a glimpse of a brand-new airport in the jungle. Its goal is to attract tourists visiting the “Mundo Maya” corridor of archeological sites in the region, and it features kiosks from U.S. industrial conglomerate 3M equipped for fingerprinting and the facial recognition of elite travelers who want to breeze through security. Meanwhile, living Mayan communities are increasingly fleeingthe region, thanks to crushing poverty, climate change, land dispossession, and violence.

In Central America as elsewhere, the U.S. border apparatus got its start and ideological underpinnings during the age of territorial expansion, and Miller dives into that history in the Philippines and elsewhere. But the “exponential growth” of the apparatus starts with 9/11 and leads to a blurring of lines between immigration and war: migration as threat, the nation as homeland, everything as security. It’s not just the border that Americans are pushing outward; it’s the very concept of the border as a front line in a war. This too, has been a focus of U.S. training. Officials tell Miller bluntly that many foreign border forces are “constrained,” meaning they don’t have the broad powers of search, seizure, and arrest that U.S. border agencies claim. In many countries, a CBP trainer says, customs agents are “tax collectors”; the U.S. is trying to “move forward in increasing their authority so that they’re able to do what they need to do.”

The U.S. also aims to “extend the border beyond the physical border” into the online realm, in the words of a contractor for CBP’s National Targeting Center, which screens travelers and cargo. That border is one that inhales vast quantities of data in order to profile individuals long before they reach U.S. shores, subjecting them to “extreme vetting.” As The Intercept’s Sam Biddle has reported, Homeland Security has even made open-source software available to enable other countries to do the kind of watchlisting and no-fly lists the U.S. does.

The exponential growth of the border apparatus starts with 9/11 and the blurring of lines between immigration and war.

Not much in this sector is open-source. Much of Miller’s book relates his hops around a series of expos and conferences where border technology is sold. The expos show off the amount of money to be made in this particular chunk of the military-industrial complex, from ground sensors to social media mining. (The U.S. Chamber of Commerce even had a rep at the Seguridad Expo in Mexico City.) Wandering around the show floors at these events (I attended some of the same ones Miller writes about), the exhibits are more craven than impressive. The ideology on display is important, but the mercenary motives of the trend to secure the world’s borders are also obvious.

Here, and generally speaking when talking about obsessions with borders, the U.S. has a rival in Israel. A rival and partner: CBP and DHS officers go to Israel for training, and the Israeli company Elbit builds surveillance towers for the U.S. border. Miller quotes an Israel brigadier general telling an audience in El Paso, Texas, that Gaza is “a great laboratory.”

If terrorism is the oft-cited justification for border controls, the real reason — inequality — is also apparent. Miller quotes the U.S. diplomat George Kennan (architect of the containment policy against communism), who declared “a certain unchallengeable antagonism between ‘him that has’ and ‘him that has not.’” The threat to U.S. dominance was one that sprung from “a jealous and embittered world.” These words describe exactly (flooding bases aside) the obsession with climate change as a military threat. No one doubts that climate change has and will cause massive displacement and migration around the world, but it does not also have to cause prosperous states to harden their borders even more. In the world order envisioned by the U.S. and many other countries, citizenship has become more important than fundamental human rights.

The basic theme of Miller’s book — that all these systems exist to ensure “open borders for the elite and a caste system for everyone else” — is familiar. But that doesn’t mean it’s not worth repeating.

Cora Currier is an editor and reporter covering national security, immigration, human rights and other topics. She previously worked at ProPublica and the New Yorker, and was a lead researcher on several books of history and politics. She lives in Los Angeles, California.

WAIT! BEFORE YOU GO on about your day, ask yourself: How likely is it that the story you just read would have been produced by a different news outlet if The Intercept hadn’t done it? Consider what the world of media would look like without The Intercept. Who would hold party elites accountable to the values they proclaim to have? How many covert wars, miscarriages of justice, and dystopian technologies would remain hidden if our reporters weren’t on the beat? The kind of reporting we do is essential to democracy, but it is not easy, cheap, or profitable. The Intercept is an independent nonprofit news outlet. We don’t have ads, so we depend on our members — 24,000 and counting — to help us hold the powerful to account. Joining is simple and doesn’t need to cost a lot: You can become a sustaining member for as little as $3 or $5 a month. That’s all it takes to support the journalism you rely on.